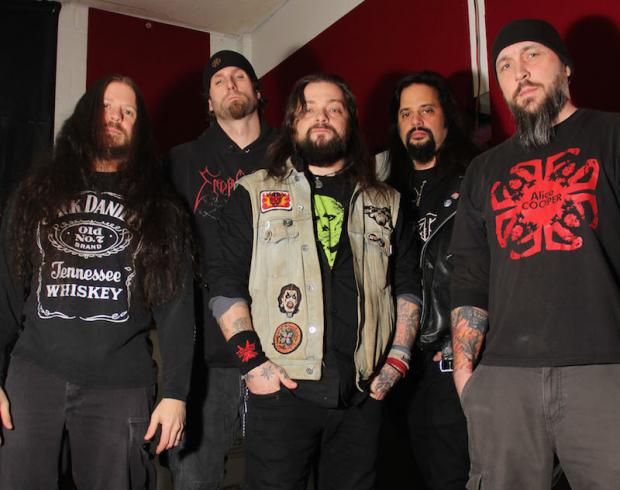 An Inteview with The Human Furnace, Frontman of Ringworm

With song titles like “Leave Your Skin At The Door,” it may be tough to leave your preconceptions at the door in regards to intense Cleveland hardcore-metal band Ringworm and their ink-coated singer James “The Human Furnace” Bulloch. But The Human Furnace isn’t just a scary looking, extremely loud man. He’s also a business owner (252 Tattoo in Cleveland and Columbus), a talented artist and a widely published writer (see his tribute to The Foo Fighters on Vice’s Noisey music blog) who thinks violent dancing at hardcore shows looks really stupid.

Ringworm is set to join Decibel Magazine’s “Through Space and Grind” early next year with Napalm Death, Voivod, Exhumed and other heavy hitters, but before all that, they will be headlining a big hardcore gig at The Rockin’ Buffalo Saloon in West Seneca on Sundary, November 30. The Human Furnace took some time to answer a few questions from The Public before they cruise up the I-90 for Sunday’s show, wrestling with hardcore’s uneasy relationship with violence, his approach to yelling loudly, not being a “fanboy” and more.

Ringworm has been active for well over 20 years now, but you always sound really fresh, especially on the Hammer Of The Witch album from earlier this year. In your view, how has the band managed to stay vital after all this time?

Part of the reason we might sound so fresh is that we actually haven’t changed too much over the years. Each musical generation that gets into what we do may find something new that they haven’t heard before, although we have been doing it for a long time. Musical trends and genres seem to come and go. We’ve never really tried to jump on any of them. Sometimes “old” sounds “new” and refreshing.

What are your reflections on coming to Buffalo through the years? I think this city feels a kinship with Cleveland because of the lousy weather, sports, economies and shared lake. Does Cleveland feel the same way about Buffalo?

Ha, well I’ve been coming to Buffalo since the late 1980’s-early 1990’s. We used to come up for a lot of hardcore shows. Just like any town, the “scene” comes and goes. And, being at this age, I’m definitely removed from much of what goes on in just about every town’s “scene” including Cleveland. But, I’ve always liked Buffalo. I have many fond memories that were created in that town.

I pretty much do everything the wrong way. They say “Sing from your stomach…” I mostly sing from my throat. They say, “Drink warm water…” I slam ice water the whole set. After nearly 25 years of screaming I know the limits of what I can do, but then I often try to exceed them. For me, singing or screaming is 40 percent how your ‘pipes’ and your throat feel and 60 percent adrenaline. When its time to go, it’s time to go. So just do it.

I want to look back at the big Firefest concert in Cleveland in April, where rival hardcore crews were beating each other with machetes and baseball bats. Ringworm’s set was cancelled as a result. What was your general reaction to that incident?

Personally, I’m not a fan of crews or anything like that. It’s not for me. I have many friends that are or were part of crews and such. That’s their thing, not mine. I completely understand having beef with somebody. People are assholes and shit happens. But most of this crew on crew business is baseless. I mean, what are you actually fighting someone about? I would have more respect for this stuff if some of these crews were actual “gangs” with legitimate things to go to war over. Stolen drugs, prostitution, gun running, theft rings,…real stuff. Violence now is perpetuating itself and for no real reason it seems. Internet beef? Who said what and who punched who’s girlfriend in the pit? I don’t know, like I said, I’m removed and older, so maybe I have no clue how hard things are out on the streets, man.

I think part of the appeal to heavy music is that it’s inherently dangerous, although most people wouldn’t admit that they are fans of mindless fighting or senseless violence. What are your thoughts on balancing heavy music’s boiling aggression with actual real life aggression and violent behavior?

Oof, thats a toughy. These days, violence is fixture in the heavy music scene. It’s always been there really. It’s violent music in its nature and will garnish that response. And it is a strange and ironic juxtaposition. But let’s be real and upfront; it’s really the hardcore scene [where] violence has really flourished to realistic and dangerous rates. Of course there’s violence at all types of extreme music shows, but nothing like what the hardcore scene can be. I understand that “dancing” can be a “personal expression” but after 20 years, I’ve seen it’s beginnings and I see where is now and where it can go at times in the hardcore scene. I can tell you that there is little “personal expression” going on most times. They’ll throw punches, swing haymakers, sling roundhouse kicks, donkey-style kicks…and they’ll do it with the sole intention of hurting people. And trying to hurt them as badly as possible. Many will claim “that’s just what happens in the pit” but, watching this type of shit from the stage for so long, I have a birds eye view. When they “randomly express themselves” they strangely seem to know exactly where someone’s face is and exactly where someone is standing. How weird? And this too, over time, has made the music itself secondary. Say what you want about “heavy” music but you don’t really see that shit at a Slayer show, or a Bolt Thrower show, or an Obituary show. And hardcore bands only wish they could be as heavy as them. I’m not a fan of the violent pit dancing at all. I’ve never been one. I think it looks stupid. And more importantly, people can’t watch a band anywhere near the stage without worrying about getting your face busted or nose broke because two tough guys want to display their “moves.” I have to admit, we’ve had shows that have gotten so violent, that it puts me in a weird position.  I hate the very violence that I helped create.

As a music fan yourself who’s had the chance to play with lots of great bands, do you have any “fanboy” moments as far as interacting with a musician or someone else you look up to?

I think, for me, a real big one is going to be the upcoming tour with Voivod and Napalm Death. Voivod, is a very influential band for me and a few of my other close friends. And for me, not just musically, but artistically as well. I try never to fanboy out on anyone, though. That’s annoying. I’ve always thought: “Treat them like a regular person and they’ll treat you like a regular person.” Granted, I might be fanboying on the inside.

Ringworm perform with Order Of The Dead, Borrowed Time and Old Ghosts at the Rockin’ Buffalo Saloon (1800 Union Road, West Seneca) on Nov. 30 at 6 p.m. Tickets are available at Eventbrite.com.