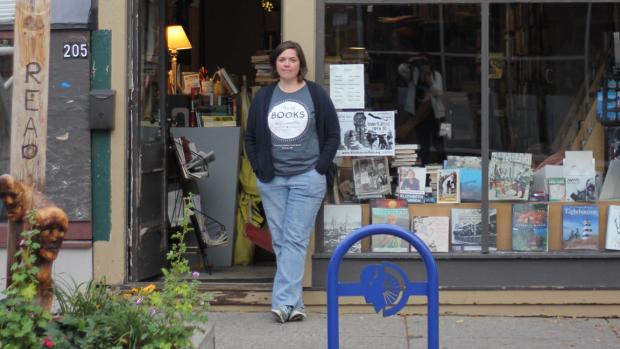 There is a quality about Buffalo as a community that is as indescribable as it is inescapable. Everyone seems to know each other in a tightly woven, “Six Degrees of Kevin Bacon” way. After living in New York City for five years, Jeanenne Petri and her husband Joe, who is from Western New York, came to the West Side to look for a house. It just so happened that the week they were house-shopping was the same week that neighborhood cornerstone Sweetness_7 Café was opening. The West Side reminded them of their old neighborhood in Bay Ridge, Brooklyn, and they decided to buy the closest house to the café. Prish Moran, the owner of Sweetness_7, later became one of their friends. In 2011, Jeanenne and Joe opened their own business, Westside Stories Used Books, at 205 Grant Street. “[Prish] was a part of the encouragement we needed to open [Westside Stories]. She’s so big on the attitude of ‘Why not?’ She’s been a great inspiration in building a business,” Petri says.

It makes sense to open an independently owned business, especially in Buffalo where rent remains somewhat reasonable and local clientele are fiercely loyal. But does opening bookstore make sense? Westside Stories counts book-loving regulars, neighbors, teachers, and non-native English speakers as customers. Even as chain media outlets closing, smaller record shops and bookstores seem to thrive. For Petri this was a no-brainer and relates directly to the area of which West Side Stories is a part.

“Interesting neighborhoods deserve a bookstore. In terms of what kind of business you would want to run, a bookstore is one of the coolest and most interesting,” Petri says. And one of the things that makes Grant Street an “interesting neighborhood” is the plethora of women-run businesses and the commitment to collaboration that flourishes there. After being open for four years, Westside Stories is interwoven into the community and Petri has experienced these characteristics firsthand: “It seems like there is a disproportionately high number of women-owned businesses on Grant Street—it’s kind of an interesting thing. This is an incredibly supportive community. I don’t imagine that if we opened up in a strip mall that we would get the same support from fellow business-owners. It seems like everyone goes above and beyond to help out.”
One of the major efforts that everyone works together on is reviving Grant Street and its image. After laying dormant for years, the Grant-Ferry Association has been reformed thanks to Petri and others in the community. The board is now made up of local business-owners, some residents, and representatives from nonprofits in the neighborhood. They have been meeting to discuss how to publicize Grant Street as the retail district that it once was and how it has bounced back in recent years. Petri notes that a strong retail quarter helps to support a walkable neighborhood. The community hopes to catch the attention of people living in Buffalo as well as the “suburban tourists” who occasionally visit Grant Street to get lunch at the West Side Bazaar, check out bookstores such as Westside Stories and Rust Belt Books, shop at Global Villages, and pick up a few things at Guercio’s. Even Grant Street’s long-term residents could probably use an update on how the area has been growing and thriving. “People who live in this neighborhood do have a lot of pride in it—although some might not see what’s happening with this development, especially if they have been here for a while. They may have given up on it,” says Petri.

Not only do these community meetings focus on the need to promote a unified neighborhood district, but they also discuss how and why this is an important goal. “Grant Street is actually a small part of the West Side, and we would like people to recognize Grant Street as its own unique thing. We definitely need to brand it. People won’t come for one thing, but they will come for a cumulative thing,” Petri explains. That Buffalo is progressing at a refreshing rate is not news. What is worth noting is a perspective from a non-native Buffalonian like Petri. “Something weird is happening in Buffalo, there definitely seems to be an energy here. The whole time I’ve been here there has been this energy. Everyone has been saying, ‘Buffalo is amazing,’ so I was never here for ‘downtrodden Buffalo.’ We have these really unique and incredible experiences over here.”