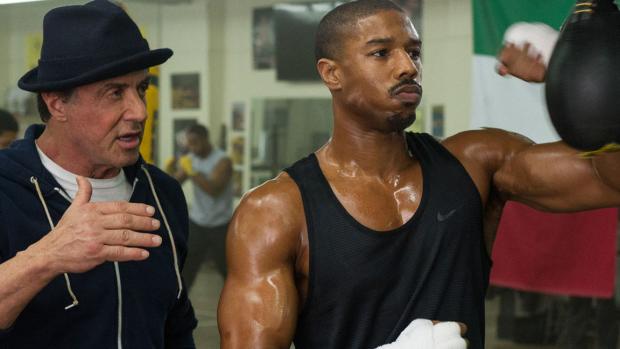 The success of Rocky, written by and starring a then-unknown Sylvester Stallone, and George Lucas’s Star Wars, launched within a year of each other in the mid-late seventies, steered American cinema away from nihilistic character pieces to the escapist entertainment that continues to dominate the global box office today. Both films launched five sequels spanning four decades, and now have seventh chapters arriving within a month of each other, Creed on Thanksgiving and The Force Awakens on December 16.

The last time Stallone put on a pair of boxing gloves was in 2013’s Grudge Match, a silly comedy that let him poke fun at his iconic Italian Stallion persona. He probably felt safe lampooning the character that made him famous because the bittersweet final image of Rocky Balboa in 2006 suggested the death of his alter ego and the end of the long running boxing saga. Continuation seemed unthinkable.

Enter Ryan Coogler, the young African-American filmmaker who scored an indie success and critical kudos for Fruitvale Station in 2013. Coogler dreamed up a Rocky spinoff about the illegitimate son of Balboa’s charismatic opponent Apollo Creed while still in film school. He approached Stallone, who wrote all six of the previous films, for his blessing, and eventually received it. The result is Creed, a crowd-pleaser which Coogler directed and co-wrote with Aaron Covinton.

The film stars Michael B. Jordan as Adonis Johnson, Donny to his friends, a young man grappling with both his secret heritage and his father’s legacy. Stallone returns as Rocky, this time filling the trainer role essayed by Burgess Meredith in the original. (At 69, Stallone is the same age Meredith was then.) With the baggage of all those sequels, Creed is as much an underdog as Stallone’s original seemed, and appears to be as much of a labor of love.

The last two Rocky films were steeped in nostalgia, and in that respect Creed is no different, paying affectionate tribute to memorable locations and characters from previous entries. But the screenplay follows a different structure while adhering to Stallone’s formula. At 133 minutes, it’s the longest of the bunch, and wisely spends time building the relationships between Adonis and Rocky, and between Adonis and his love interest, an aspiring R&B singer played by Tessa Thompson. Jordan proves himself fit for the leading role, a man with deep emotions percolating beneath the surface. Stallone delivers one of the best performances of his career: The hulk with a heart of gold has attained wisdom and weariness in his golden years, and Stallone conveys as much with his sagging eyes and battered body as he does with the character’s trademark speech pattern. These films have always traded on sentimentality, and the notes struck by the cast here are honest, even if the challenge faced by Rocky feels contrived.

Coogler and Jordan are as adept in the ring as they are with the human drama. The boxing sequences, captured in thrilling detail by cinematographer Maryse Alberti, rank with the best of the series; an early match covered in a single take is especially energetic. Alberti also does a masterful job portraying the streets of Philadelphia, making the city a real character in the story for the first time since Rocky. If the film comes up short anywhere, it’s with the champion Adonis must square off against in the climactic bout. Real life boxer Tony Bellew is game to snarl, but isn’t given the screen time to establish the character as a true villain for Adonis to take down. We’ll have to wait for the sequel for that.