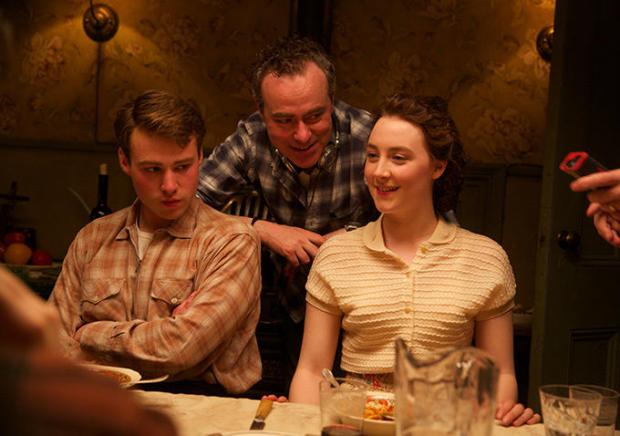 How good a film is Brooklyn? I’m paralyzed at the thought of trying to describe it, for fear that anything I say might make you think that it’s not a movie that interests you. All that lets me move along with a review (aside from deadline pressure) is the knowledge that this movie is being so universally praised by critics that my opinion won’t make much difference one way or another: Surely we can’t all be wrong.

It’s not just that this story of a girl leaving Ireland to make a new life for herself in 1951 succeeds on its own merits. Arriving when it does, at a time when so many people are being forced to leave the lands of their birth and so many normally decent people want to turn them away, it’s also a tremendously important film. Whatever your feelings on the too many contemporary versions of this story, they should be made with some empathy for what the émigré experience is like.

Adapted from Colm Tóibín’s 2009 novel by Nick Hornby, Brooklyn stars Saoirse Ronan as Eilis, a girl with few prospects in the economically devastated Ireland of 1950. A local priest arranges for her to move to Brooklyn, where another priest (Jim Broadbent) can provide a job and housing. In many ways it’s a difficult choice: She’ll be leaving her family and everything that she knows. But it’s also no choice at all, as Ireland offers her only a dim glimpse of a drab future.

The trip by boat isn’t easy, and her new job and living quarters provide unexpected difficulties. But this isn’t a melodramatic movie: Eilis rises to the challenges and slowly begins to thrive. (Among its other successes, the film is filled with interesting details at every step of the way, like how a department store in 1951 operated.) It’s when Eilis is called home, after a year in America, by a family tragedy, that she finds she has to make a choice between the new and the old, symbolized by the Italian plumber she has fallen in love with in Brooklyn (Emory Cohen) and the well-to-do young man who can offer her a life in Ireland (Domhnall Gleeson).

Emotionally rendered by an attractive cast and crafted in the best traditions of mainstream filmmaking—it wouldn’t look out of place if you were to see it some evening on Turner Classic Movies—Brooklyn is a captivating and rewarding moviegoing experience, the kind that at best comes along once or twice a year.

Brooklyn was directed by John Crowley, graduate of University College Cork best known in the US for the 2013 thriller Closed Circuit. I spoke to him recently at the Toronto International Film Festival.

Were you thinking of any larger issues regarding immigration while filming Brooklyn?

We filmed before the current global crisis kicked off, so the honest answer is not really. What was more on my mind was the specific issue of emigration from Ireland, and in a broader way from Europe in the mid-20th century. What’s particularly fresh about Colm’s novel is that it’s from a young woman’s point of view. It’s a keyhole drama in that if you can get that very specific, small story right, then it has the scale to carry hundreds of thousands of other stories with it.

There are three great waves of emigration from Ireland. There’s the one that resulted form the famine in the 19th century, one in the middle part of this century from the 1940s, and one in the 1980s. When Ireland got its independence [in 1922], there was a protectionist economic policy under [President Éamon] de Valera, which was ruinous for the country. The idea that there would be Irish goods for Irish people. The scandal of it was that the single biggest export from the country was young people, and the single biggest source of money coming into the country was from those young people. But nobody ever talked about it—there was a degree of shame. And if you emigrated you were considered to be a failure, when in reality it was the country that was failing.

Stories about Irish immigrants to America usually concern the struggle they have here, without any looking back.

What’s brilliant about the novel that we tried to capture in the film is that the choice that Eilis has to make between the two countries and the two men is representative of the split that happens in exile. People rarely want to emigrate unless they have to. Because wherever you go to, you’re never actually from that country. But nor any longer from the country you left. You become a third thing, an exile. When she comes back—there’s a mythic aspect of a young person who leaves on a quest to bring back the golden fleece, the boon to make the country well. The spin on this is that the country can’t take her gifts.

What I thought was interesting and true to life about the story is that it suggests that the heart is capable of being loyal to more than one person. It’s a difficult thing to achieve as a storyteller, to ask an audience to invest the better part of an hour in a film to believe in her story, her loneliness, and her happiness when she finds one person in the world for herself—and then to park all that while you develop another love affair without making the audience want to cry foul.

Was it hard to research a woman’s perspective on emigration?

The only reference I’ve come across of a first person female narrative is in Heinrich Boll’s The Irish Notebook. On the train leaving Ireland, he overheard a conversation between a young woman and a priest that he copies down. It’s extraordinary because she’s berating the priest, hammering their hypocrisy toward all the women who had to leave and were no longer allowed to be part of their moral code

It’s one of the thing that Colm Tóibín does so well in the novel, is to inhabit a young female voice. And to delicately trace a character who at the star—I don’t want to say she’s blank exactly, but she doesn’t have a lot of cultural references. She just knows that there has to be another life than the one she’s living.

An extended version (with spoilers) along with interviews with Brooklyn’s co-stars Saoirse Ronan and Emory Cohen will be posted at dailypublic.com.