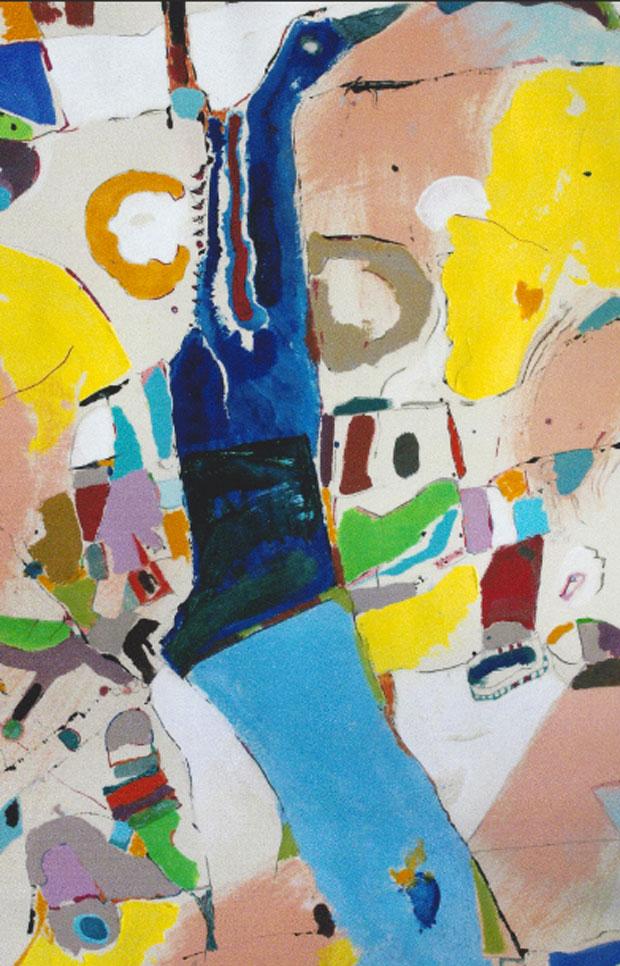 A river runs through it. Something you could say to describe the complicated artwork of James Pappas, on display at the Paul William Beltz Family Art Gallery at Villa Maria College. About 20 paintings or drawings in all. Of wilderness geography, viewed from above. So maps of sorts. Jumbles of fauvist colors—deep primary hues and lighter pastels—and fauvist forms. Hard to characterize, except that in many or most of the works, a kind of river of blue runs right through the middle, more or less top to bottom, appearing and disappearing and appearing again, surfacing and subsurfacing, and more or less holding the jumble together, like a central feature, like a theme, in terms of form and color, but also in terms of rhythm, like a musical theme. For these paintings are about geography, but also about music, specifically jazz. Music in which the theme appears and disappears amid a multitude of developmental and decorative riffs and descants.

Pappas calls these works “spacescapes,” a term he understands to incorporate not just space but time. Geography and music. “For me, making art is an adventure in time and space,” he says in his artist’s statement. He also talks about how these paintings and drawings—with regard to both time and space—are colored by his years of involvement with film. “I use the tools of film narrative construction. Each work is like a frame of reference. All these are ways in which to define my sense of rhythm and space.” Film technique montage, jump-cut juxtapositions. Somewhat like jazz.

The individual works are untitled and numbered, or are titled Outer Space, plus a number. Not much to go on. But to give an artwork a title prompts the viewer to look for what the work supposedly represents, Pappas says in his statement. Rather, he says, “it is important to rely on your own experience to establish a conversation” with the work. So the viewer gets to decide what the work may or may not be about, after some careful looking. He insists on the careful looking.

Whereupon—after some looking—the wilderness geography starts to look a little familiar. What was wilderness begins to seem possible cityscape. Again in aerial view. Maps maybe not of a known place, but knowable. Or suggestive of a known place. Some of the central blue waterway paintings or drawings a little like maps of Venice. Grand Canal and surrounding patchwork quilt of piazzas and palazzi and churches and whatnot. Others a little like Rome. Some recurrent circular or near-circular figures adjacent to the waterway—the Tiber—like remnants of ancient constructions in the round—maybe amphitheaters originally—abandoned and forgotten and silted over through the years and centuries. But no mark on the surface is ever completely erased, eradicated.

Alternatively, the circular or near-circular forms could be oxbows. Characteristics of American rivers. You can never erase an oxbow, what was an oxbow 10,000 years ago.

Look some more and you notice some animate figures amid the geography. Swimmers in the water, maybe fish, maybe human, or something in between, something evolving. And a diminutive whale or two. One of the waterways, when you look real hard, becomes a salamander.

A subset of paintings is in predominant white, reminiscent of snowfields, or floodwaters, with multicolor small islands poking up here and there above the water or snow.

Back and forth these maps go. Wilderness to city, city to wilderness. Nature and civilization. To jazz rhythms.