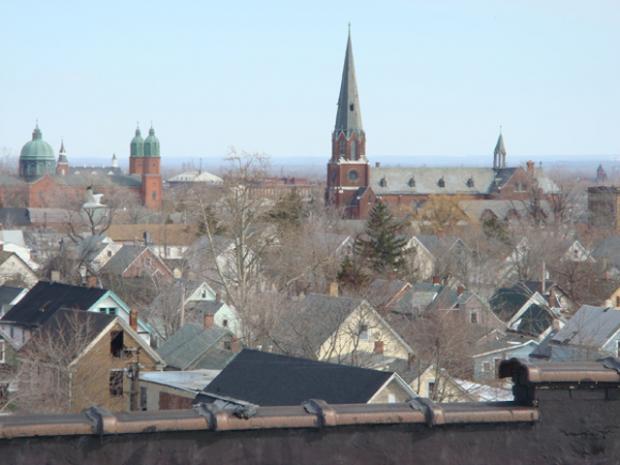 There’s a robust and accessible academic literature about how shrinking cities, even “zombie” cities (Buffalo was recently so labeled), can come back to life. It’s all about doing what so many independent actors in Buffalo already know and practice, and what folks in Pittsburgh and Cleveland and even Detroit are doing, too: It’s a process of “repurposing and re‐use in order to create a new city scape from the remnants of the old.”

The elements of success include new zoning codes that allow for increased density, mixed-use restorations to encourage small-scale job-creation and entrepreneurship, creating new green spaces, banked land, and even—as in Youngstown and Detroit—moving folks out of low-density neighborhoods and getting them set up in refreshed urban villages. Urban villages work for everybody, thanks to their walkability and their adjacency to services and transit.

But these adaptations happen in the context of regional population dynamics. Here and throughout the Rust Belt, we should expect population stability at best, but also population decline—not collapse, not calamity, not what Rome experienced after the Huns or what Athens experienced under Ottoman rule. Just a bit more slimming is ahead, and we should plan accordingly.

There will be incrementally fewer kids and incrementally more folks over 65 every year for the next 20 years, until the Boomers head for the exits after 2030. In-migration, which is small today, is projected to remain small. The birth rate will be higher in those parts of the Buffalo metro where the median age is younger than where it is older. Overall, there will be fewer of us around. That’s a picture that is pretty consistent with every other Rust Belt metro.

This projected shrinkage should be neither shocking nor depressing, but the Cornell  projections are consistent with those of other analysts. So why isn’t this fact pattern registering with some of our elected and appointed leaders?

In September, the consulting firm Perkins + Will delivered a “preferred plan” that includes 2,200 new housing units for Buffalo’s Outer Harbor by the year 2030, when Cornell projects Erie County’s population to have fallen by about 90,000 people, to about 830,000. This plan, which so far bears the imprimatur of the Erie Canal Harbor Development Corporation, creates a problem for every existing restaurant, cultural organization, homeowner, and public official in Buffalo and its surrounding metro. These consultants have given Governor Andrew Cuomo’s appointees an indefensible fantasy rather than a feasible plan—a fantasy premised on the idea that there will be a market for the 2,200 new housing units that Perkins + Will are telling ECHDC to build in its “Ship Canal Neighborhood,” its “Cultural District,” and its “Heritage Loft District.” Sure, there might be 2,200 new takers—just so long as 2,200 more dwellings in this market are abandoned. (Abandonment here is already a huge problem; there are, depending who is counting, at least 17,000 and as many as 20,000 abandoned dwellings inside Buffalo city limits today.)

Evidently, the ECHDC consultants don’t know where babies come from. Fortunately, most grownups here in Buffalo, the land where out-of-town consultants come to reap hefty fees for delivering eyewash and irrationality, know what the Cornell University people also know—namely, that babies come from women of child-bearing age. That’s why anybody who suggests that there will be an upsurge of home-buyers over the next 30 years should take a look at Cornell’s numbers.

As of the 2010 Census, there were 197,414 women age 15-44 in Erie County. In 2025, Cornell estimates that there will be 161,450. In 2040, when Perkins + WIll expect full build-out of the 2,200 new units of outer harbor housing, there will be fewer still, in an overall Erie County population that Cornell projects will be 140,000 smaller than today. Babies will still be being born, but two key facts about the Buffalo area will almost certainly be true: First, we’ll have fewer children than we have today; second, we’ll have fewer empty-nesters, too.

The year 2030, when Cornell’s demographers say we’ll be down 90,000 people, will not arrive without 15 intervening years of personal choices, government actions, economic changes, and a lot of continuity: Things tend to change a little bit at a time. Long-term trends are stubborn.

Positive change, we all hope, is underway. If Riverbend delivers hundreds of new jobs over the next few years, as we all hope, then that’s great. If the newly refreshed, newly consolidated combined campuses of Children’s Hospital, UB Medical School, Buffalo General Hospital, and Roswell Park collectively still employ as many people as they do today on their separate campuses, that’ll be great, too. If the Central Business District still employs 40,000 people in the various banks, law firms, government offices, and entertainment venues, and replaces the jobs once held by the more than 2,000 people who used to work for HSBC, then hallelujah.

Chances are, though, that we may see some positive changes despite the annoying persistence of old trends. Perhaps more of the millions of square feet of vacant downtown office space will become lofts and condos than will be filled with new firms employing new people. Perhaps Buffalo’s century-long trajectory as a branch-office town rather than a home-office town will continue to see its workforce relocated overseas. Perhaps the shrinkage in government employment will continue, leaving more of the local workforce in lower-wage, lower-benefit jobs than used to be the case.

But then, perhaps our comparative advantage as a low-cost, high-service, highly educated, infrastructure-rich region will combine with our other comparative advantages: great recreational access, economic stability because of our institutional strength and sophistication, our abundant precipitation and strong supply of highly productive agricultural land, plus an improving mix of green energy resources…

Losing 100,000 people over the next 15 years will still leave us richly endowed in a state whose population is growing rapidly, thanks to immigration in New York City.

A recent report  by State Comptroller Tom DiNapoli’s staff is all about how much economic robustness is imparted to Gotham by all the new immigrants flocking there, to wit:

Could that influx of diversity and energy make a diffrerence here? Yes—if we and our leaders stop chasing real-estate fantasies, and concentrate instead on what the baby-makers want and need.

Detroit is experiencing increased economic dynamism because of immigrants. It is indeed a tragedy, beyond American comprehension, that the wars of Iraq and Syria have devastated the homelands of the world’s most ancient Christian communities—but in recent years, those communities have sent over 100,000 refugees to the Detroit metro area. In the 1990s, there was a similar crisis-driven influx of immigrants from the former Yugoslavia into Utica, New York. Today, Buffalo receives about 1,500 refugees a year. Tragedy elsewhere already brings us talent,if not big numbers

But there is a case that should be made: Buffalo’s great opportunity is precisely the same as that offered by Brooklyn and Queens—except even more so, as our barriers to entry to the housing market are minimal—even though we lack the density and the diversity of New York City.

We must understand our opportunity, and our context, and our trend-lines. Our government employment is a basis for economic stability, not a barrier to economic growth. Our infrastructure needs refreshing, not expansion. Ditto our housing stock, ditto our office buildings. Consolidating services, regionalizing our land-use planning, enhancing the child-friendliness of our public spaces, aiming for the regional rebranding that Pittsburgh achieved for itself, when it went from an industrial has-been to a hub of engineering and e-creativity—all this is possible, if we first recognize that we are still making great, talented, beautiful babies, but not nearly as many as we used to.