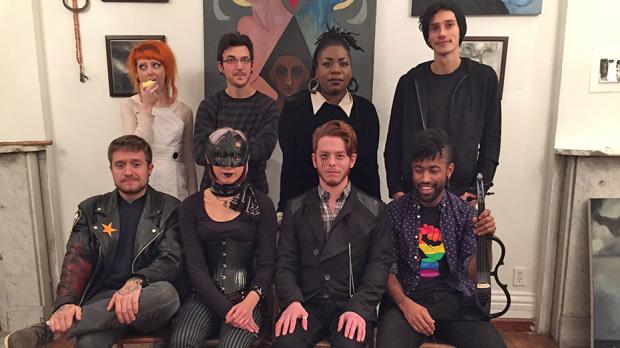 There’s a sign in the front hallway of Dreamland that reads: “This is a safe space for queers, women, and transfolk.” Over the last nine months the art space at the fringes of Allentown has become a haven for the avant-garde in Buffalo, and the collective that runs the place have successfully balanced the line between remaining all-inclusive and maintaining a safe environment.

It’s Friday night and the space, located at the corner of Franklin and Edward streets, is throwing a coming-out party of sorts. It’s the first time they’re asking patrons to donate to them so that they can pay the filing fee to become a 501c3 nonprofit organization. The process starts now, and could take more than a year, but Dreamland is buzzing and it seems like the right time to move forward.

Tonight is a celebration. People of all ages, races, genders, and sexual orientations are in this lofty room in the mansion outside of Allentown. There is a girl dressed in an earthworm costume dancing in the corner (though guests debate whether she’s actually a human croissant or some kind of crab). The walls are covered in photographs by 24-year-old artist Pierce McCleary, one of the collective who helped start Dreamland. The photos are of the type that cause guests to do a double-take. Taken at the Folsom Street Fair—a leather and BDSM subculture festival held in San Francisco each September—the photos are pretty explicit, yet mesmerizing for their unique intimacy. McCleary, and fellow founders Dana McKnight and Seth Girod, went to the Folsom Street fair to capture the vibe, and capture the vibe they did. “It was the only space I’ve ever seen that comfortable and open with the sexual fetish community. It was just free,” says McKnight, age 31. McKnight was raised on the East Side of Buffalo, but has bounced around the world. She studied for two years in Japan before moving to the Netherlands (can you say “culture shock”?), where racist attitudes were part of the reason she left to return to Buffalo in 2008. She has studied cultural anthropology, art, and she’s even trained in blacksmithing.

A rap group called Hooked on Casiophonics—multi-talented local musician Pam Swarts and rapper Rocknutz—are on stage. Rocknutz stands in the middle of the room free styling as Swarts sqweaks out funky electronic beats, which emanate from a rack of blinking devices. Rocknutz passes the microphone to each of the approximately 20 people standing in a semi circle around him in the room, and each person participates. Nobody is excluded. In fact, Rocknutz makes a point of putting the mic in front of the mouth of each person in the room, regardless of how timid they appear. That timidity melts away quickly though. At the end of their set, Rocknutz finds the mic slipping out of his hands. A young man in the audience who goes by the artist name J Aquarious, has assertively grabbed the mic, which Rocknutz is happy to hand over. This is Aquarious’s first time here. He’s a shy kid, but after grabbing the mic—without hesitation—he lays down the hook and first verse from TLC’s “Don’t Go Chasing Waterfalls.” The crowd goes nuts. High-fives are aplenty.

A gothic ballerina named Jenn Kay—who rents Dreamland studio space upstairs—wears a black leather skirt and a masquerade mask as she spins in the corner. The next act, a live electronica duo called Armageddon Party, which includes Brian Gorman and Newt—another Dreamland artist in residence—takes the stage. They play a killer set of music that mixes live bass and drum machine sounds into trance inducing dance music. A bunch of people bring some fallen leaves in from outside and cover the floor in the foliage.

It’s a surreal scene, but not an unusual one for Dreamland.

Dreamland is run primarily by Girod, McKnight, Kay, and Michael Berdine. Before the building known as the Florentine Center became Dreamland, the space was an attorney’s office, and before that a psychiatric office. Actor Matthew Broderick even shot a movie in the mansion on Franklin, The American Side, just before Dreamland took over. The property manager of the Florentine Center says that Dreamland is their ideal tenant.

“They bring more value to the neighborhood and they highlight some of the bones of the building.” Architecturally, the building is of the style of an Italian villa, which is complimented by the artistic nature of the space that Dreamland has created inside, he says.

“Since their occupancy, the building itself has received quite a bit of attention from the Allentown Association, the Elmwood Association and several other media sources.”

McKnight says she and her friends sensed that Buffalo was ready for a new alternative space, though she wasn’t sure exactly what shape it would take.

“We weren’t part of any scene before this, so we had no idea what this would evolve into,” says McKnight, sitting in the kitchen of Dreamland a few days after the party.

“I think [Dreamland] centralizes a lot of the avant garde, weirdo culture that happens here.”

The previous night, Tennessee synth-partiers, Terror Pigeon, came through Dreamland with Rich Aucoin on as support, and according to McKnight, it was another in a series of successes. In nine months Dreamland has hosted nearly 100 shows. Today a klezmer music group called Ahavaraba (which means “infinite love” in Hebrew) is holding band practice in the main room. The Dreamland collective all come from diverse and different backgrounds, but seem to share a similar vision for the space.

Frits Abell, a Buffalo ex-pat, discovered the space during a recent visit to Buffalo after some of his friends in the know about all good things subversive brought him there.

“I immediately fell in love with the space, the DIY atmosphere, and in your face programming. It definitely fills a local need—to put it in Dana’s words—to have more ‘malarkey’ about.”

As far as local inspiration goes, places like Nobodies, The Vault, and Sugar City—which reopened in August in a new location on Niagara Street—have played a big role in shaping what Dreamland is and will become. For the artists there, their space exists in response to the closing of several of these small art spaces.

Michael Berdine, another member of the Dreamland collective, elaborates on the importance of their predecessors: “Sugar City helped us with our original framework. They taught us everything we need to know about being a successful art space.”

For McCleary, the Black and Brown Punk Show Collective out of Chicago, hosted just over a year ago, was part of what inspired the group to start Dreamland.

“We were impressed with their queer-friendly, positive attitude and community engagement,” says McCleary.

Though Dreamland is a positive space, McKnight says it’s okay to feel challenged. McCleary’s photos from the Folsom Street Fair are the type that might make that happen. “It’s okay to feel uncomfortable, but not triggered,” says McKnight.

If people need to check their attitudes, it’s done at the door. Needless to say, misogyny and homophobia are not tolerated. McKnight says that people respond really well to these common sense guidelines, and that they have rarely, if ever, have to enforce any rules. People just self-police, she says.

As far as achieving nonprofit status goes, it would allow the collective—who currently split the rent between the upstairs studio spaces and the ground floor art gallery—to seek federal, state, and private grants that will help them keep the space running. They hit a lot of niches, which will help them find grants in the future. It’s used as a workshop space; for LGBTQ groups; for women’s self defense classes, and for sex education classes, as well as serving as a gallery and small performance space. Dreamland has had a ton of support from the community in setting up to become a nonprofit. Allen Street Consulting have been instrumental in helping the space; even waiving their legal fees to do so, because as McKnight puts it, they want Dreamland to succeed. “The community has been beyond helpful,” says McKnight. “Buffalo shines when it comes to this kind of thing.”