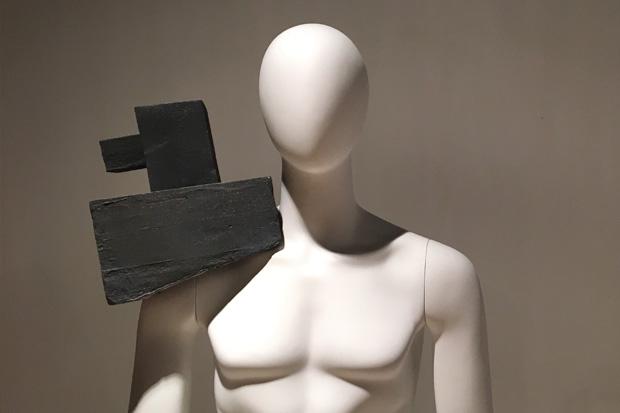 The somewhat grim alternate world of artist Zack Boehler’s narrative-with-sculpture allegorical installation currently at Big Orbit is a blend of elements of two other literary narrative alternate worlds: George Orwell’s in 1984, and Dante’s in the Purgatorio. The imagery is from Dante, the spirit or sensibility of the work is from Orwell. It’s a lot of weight to carry.

Which—coincidentally—is what the installation is about. Carrying weight. Figuratively and literally. Figuratively, the weight of psycho-socio-economic burden for any individual whose upbringing may have left psychological scars, and/or whose ethnicity or religion or gender were in one way or another vilified or scapegoated in the recent presidential campaign, and/or economic burden, like say if someone just got out of college with a degree in anything other than computer science or engineering, and student loan debt in the serious multi thousands.

Boehler’s alternate world translates these figurative or metaphorical weights into literal—physical—burdens that the individual has to drag or carry around with him. Or alternatively—this is a key feature of the alternate world of the installation—there is a vaguely medical-governmental organization that mandates converting the physical burdens into attachments to the body—to backs and shoulders—by means of magnetic implants. It’s possible to remove the attachments, but against the rules.

In Purgatorio, Canto X, the souls of the prideful are purged of this worst of all the sins by having to walk stooped over under the weight of huge rocks they bear on their backs and shoulders. Symbolically the moral weight of their sins. In one of his most beautiful metaphorical excursions, Dante likens the sufferers to worms—such as one can usually find under large rocks—but then, in a kind of poetical legerdemain—or bait and switch—changes the worms reference to caterpillars, that he describes as born to become angelic butterflies, destined—except that sin of course could get in the way—to fly up to the celestial realm. Where actually all these souls are headed, though by a rather slower and more cumbrous method of travel.

The Orwellian element in Boehler’s invented world is that the weight prosthetic attachments the medical-governmental organization mandates are tracking devices. That is to say, control devices, that allow the authorities to monitor the whereabouts and activities of the device wearers at all times, and ultimately assure they never discard or otherwise escape from their burdens. Never rise above their given socio-economic circumstances. Never heal or outgrow the psychological.

The medical-govermental organization is known by its initials, FDMA (for Federal Department of Mandatory Appendages). For a comparable, a little like the Department of Homeland Security. A public notice poster warns that “the strongest defense against appendage rule breakers is you. Under Sec. 18.1 of the FDMA Act, all adults are required to wear appropriate appendage during mandated hours, regardless of location…Should you see someone, a friend, neighbor, breaking appendage rules, it is your duty to report them…Complaints can be filed with local law enforcement or by contacting your local FDMA office…” See something, say something.

An added Orwellian note at the exhibit opening was a pair of watchers of exhibit attendees, on closed-circuit television, from behind a partition wall that attendees could peer behind and observe the watchers watching, and taking notes. But may just as well have missed—not have noticed—as there seemed no particular reason to look behind the partition wall. You could even talk to the watchers—they seemed friendly enough—and ask them questions—like what were they watching for, or taking notes on. But they pointedly declined to respond to questions, but just took more notes.

The show is called Together We Carry the Weight. It continues through January 8.

Together We Can Carry the Weight
Big Orbit / 30d Essex Street, Buffalo