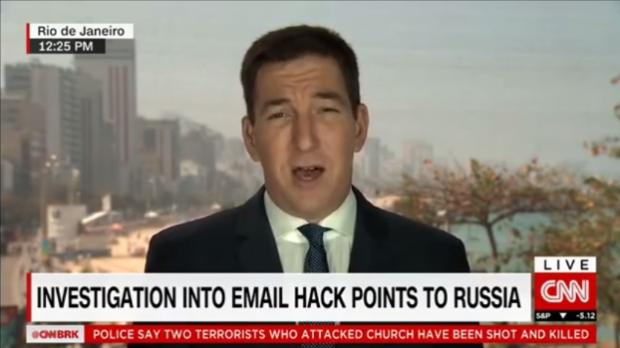 Insufferable leftist poster child Glenn Greenwald finds himself exalting in his role as unlikely scold for the Democratic Party — an organization to which he does not belong, located in a country in which he does not live. Greenwald is, in real life, the sort of blame-America-first-next-and-last commentators who conservatives blame all Democrats of being.

He has published a missive to his “Intercept” website, where he nags Democrats for, basically, being upset that they lost the election, despite the fact that Hillary Clinton so far as a 2 million vote lead in the national vote tally.  The post in question bears a title that perfectly reflects Greenwald’s verbose arrogance: The Stark Contrast Between GOP’s Self-Criticism in 2012 and Democrats’ Blame-Everyone-Else Posture Now. Do you even headline, bro?

The thesis, naturally, is right there in the title itself; Republicans critically examined the reasons why they lost the 2012 election, while Democrats blame everyone and everything under the sun. Greenwald, a prominent Putin apologist, uses as his first salvo the Democrats’ anger at Russia’s hacking, meddling, and connivance with Russian intelligence outlet Wikileaks to influence the election. He doesn’t really say it didn’t happen — he’s just hectoring the Democrats for talking about it. Because to Greenwald, privacy is of paramount importance when, e.g., the NSA is examining metadata in suspected terrorists’ communications, but something casually to be ignored when it involves the theft and publication of hundreds of thousands of private emails from and between members of a political party and campaign.

Here’s why Greenwald is a propagandist, and not even an especially good one, at that. From his article:

This Accept-No-Responsibility, Blame-Everyone-Else posture stands in stark contrast to how the Republican National Committee reacted in 2012, after it lost the popular vote for the fifth time in six presidential elections. RNC Chairman Reince Priebus called Mitt Romney’s loss “a wake-up call,” and he was scathing about his party’s failures: “There’s no one reason we lost. Our message was weak; our ground game was insufficient; we weren’t inclusive; we were behind in both data and digital; our primary and debate process needed improvement. … So, there’s no one solution: There’s a long list of them.”

The RNC’s willingness to admit its own failures led to a comprehensive 1oo-page report, issued only a few months after its 2012 defeat, that was unflinching in its self-critique. One of the report’s co-chairs, GOP strategist Sally Bradshaw, warned upon issuance of the “autopsy” that “public perception of our party is at record lows. Young voters are increasingly rolling their eyes at what the party represents and many minorities think Republicans don’t like them or don’t want them in our country.”

Check the links and check the dates. It is now November 23rd — about 2 weeks since a cataclysmic election day. Here are the salient takeaways:

2. When Romney lost to Obama in 2012, it was as much a shock to some conservatives as Clinton’s loss was to progressives. They didn’t see it coming. The only difference is that the polling accurately predicted Romney’s loss, but Republicans convinced themselves that the polls were somehow “skewed”. In 2016, the polls were pretty accurate. The losses in the key states Clinton gave up — Michigan, Pennsylvania, Wisconsin — were razor-thin, and she is now 1.5% — over 2 million — votes ahead of Trump in the national vote.

3. To suggest that conservatives weren’t pissed off and engaged in a rage-fueled blame-game in November 2012 is a ridiculous re-write of history. For example,

4. As Greenwald points out in his piece, the Republicans’ 2013 navel-gazing was a big waste of time, because four years later they nominated a bombastic gold-plated man who eschews ever recommendation contained therein about inclusivity and outreach.

But as is true of anyone who wants to reverse their own failures, Democrats need to accept responsibility and blame, and stop pretending that they were just the victims of other people’s failures and bad acts. They’re not divinely entitled to support from voters, nor to an unimpeded march to victory for their preferred candidate, nor to a press that in unison turns itself into Vox or a Saturday morning MSNBC show by suppressing reporting that reflects negatively on them and instead confines itself to hagiography. In fact, this entitlement syndrome that is leading them to blame everyone but themselves should be added very near the top of the list of self-critiques they need to begin working promptly to address.

The time will come to examine what the Democrats did wrong as a party, as an apparatus, from its grassroots to its summit. That time, however, will come soon enough. We haven’t even reached Inauguration Day, and Greenwald expects Democrats — who had to run not only against Donald Trump, but against the FBI, Wikileaks, Putin, 30 years’ worth of anti-Clinton smears, and a Clinton-averse media — to just dummy up about the very real blockades they encountered and engage in a thoughtful self-examination about, e.g., how their messaging didn’t appeal to white working-class people in the rust belt, or how they didn’t adequately exploit rural and suburban grievances.

Greenwald dumps a bulldozer’s worth of salt into a gaping wound, with false information that he’s manipulated to underscore a finger-wagging spin. About what you’d expect from this propagandist.