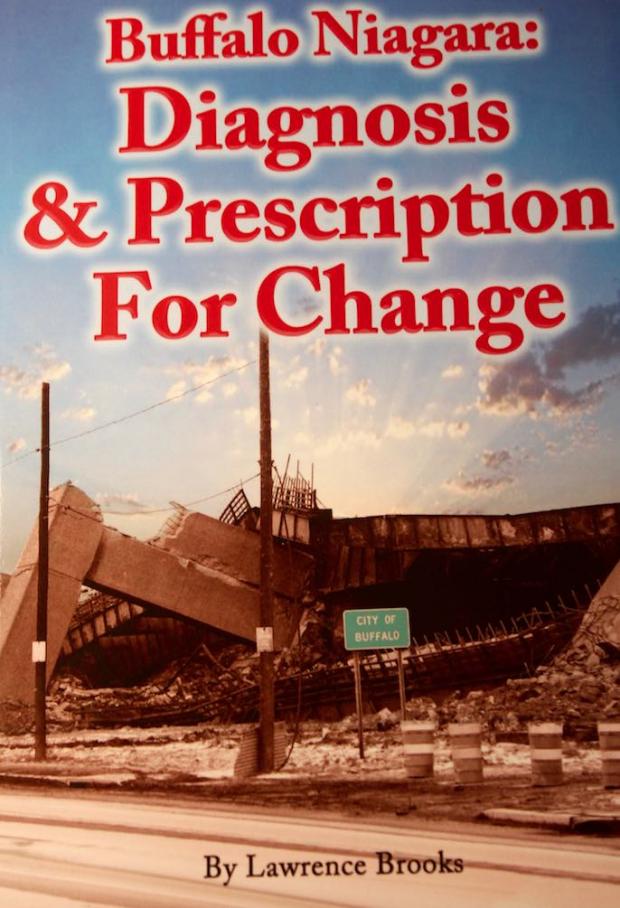 Larry Brooks is one of those people that is very smart, persistent, and a stickler for details. He is also a local action oriented and thought leader. He has been an important addition to local and regional not for profits that address poverty and environment. He has served on the board of Riverkeeper. He is currently the president of the Western New York Land Conservancy. When he contacted me a while back about an interview for his book, I was more than a little nervous. This book proves that I should not have been. Besides myself, Larry conducted wide-ranging interviews with a lot of folks both familiar and unfamiliar in this book. These voices, lead by Larry’s profound insights, are revelatory. This book provides an important analysis of our current economic and social conditions with a focus on the environment. And it more than suggests that we are not doing as well as we may believe. What he describes may change our view on our future models for a successful region. This book provides a prescription for truly sustainable future, an inclusive future, that you will simply not find elsewhere else.

I recently sat down with Larry and asked a few questions about the book.

Tell us what this book is about.

The book is a comprehensive report on the Buffalo Niagara Metro region. It looks at the region through the healthy communities model which describes four dimensions: human, social, economic, and environmental. The book is divided into three parts the first of which is a state of the region report; the second is an analysis of reasons why we are where we are today; and part three is prescriptive, containing a new narrative for the way to go forward and for this region to realize its potential. Especially with this third part, my intent is to convey hope, and motivate and inspire citizens to better our community. The worst thing that could happen is for people to put their feet up on the table and say things are fine just the way they are.

How does this book and what it lays out impact the perception of Buffalo, Buffalo’s economy, and Buffalo’s future?

The perception of Buffalo is a complex picture. For instance, much of the recent good news about the region has to do with economic development: the Buffalo Billion, HarborCenter and Canalside, RiverBend and Solar City, construction at the Buffalo Niagara medical campus, new hotels and restaurants, and even an uptick in employment. But this is a very narrow way of looking at our Metro area and it ignores human, social, and environmental aspects. The euphoria about the good recent developments is just a matter of perception. For people who came of age and awareness in the 1970s or for people who moved here then, this was rock bottom in Buffalo’s trajectory. From that perspective everything looks like up. But for those of us who were here in the 1950s during Buffalo’s heyday, well, we’re not back to that yet, back to the times when there were pedestrians crowding the streets of downtown Buffalo and stores open on every block every night of the week. A time when there was an elm-tree-lined Humboldt Parkway instead of the ugly sunken scar that is the Kensington which divides the Eastside. Here’s another example of how perception clouds the picture: Buffalo is saddled with a reputation of being one of the poorest cities in the United States. But the poverty rate for the entire region is below that of New York State and about on par with the USA average. That is to say the Metro area is no poorer than the rest of the country but because we segregate our poor into the urban cores, we have a negative reputation. Hopefully this book will expand the awareness of and conversation about the community to subjects beyond the very narrow lens of economic news. Until we start talking about these other topics — sprawl, segregation, loss of farmland, environmental degradation, the higher cost of living that comes from fractured governance — these problems won’t get solved and our region will continue to lag behind the rest of the country.

Much of the cheerleading recently about good news worries me. It makes me think that people are satisfied with the way things are going and that we can ease up on the gas. I have already been criticized for bringing up some of these problem issues. But there is a great danger in being complacent about the way things are going right now. It’s happened to the region once before—in the 1950s and 1960s the community’s leaders were pleased with the status quo in the face of massive changes facing our country: changes in transportation such as the interstate highway system and the opening of the St. Lawrence Seaway signaling shifts from waterborne freight to truck and air freight, the massive demographic move to the suburbs and the sunbelt, and the shift from manufacturing to service industries. As brilliantly explained by author Diana Dillaway in her book Power Failure, our leaders chose to stand pat while other communities adapted. That was the beginning of the region’s decline.

What are some important things that readers should take away from this book?

In the human dimension, one of the most important things I discovered is about the health of our population. The Robert Wood Johnson Foundation, analyzing data from County health departments, ranks Erie County 53rd and Niagara County 59th out of 62 New York State counties. In terms of health, we’re near the bottom. This begs the question of ‘why?’ But according to the Erie County Department of Health Community Health Assessment, the causes are primarily traced to lifestyle factors— principally smoking, diet, and physical activity. We prefer to watch the Bills and Sabres from the living room couch rather than participate in sports ourselves and celebrate a festival featuring high-fat chicken wings and a binge-eating contest.

Regarding the social dimension, statistics do not bear out the claim that Buffalo is the “city of good neighbors.” Certain measures of volunteering and philanthropy are below state and national averages. One of the most shocking statistics to me is that in Western New York only 33 percent of adults are registered organ and tissue donors compared to 48 percent of the adults across the nation, despite the fact that New York State’s third-highest among all states for number of residents in need of transplants. In other measures of social capital once again we are below average—percentage of family households, married couple families, average household size, and average family size are all below national and state averages.

Regarding the good economic news, there are several qualifications. Typically, the new construction in other cities around the country—just look at Toronto—it is primarily driven by private capital. But in Buffalo the majority of the new construction is being sponsored by taxpayer-funded public capital mainly from New York State, such as the Buffalo Billion. As for the new construction at the Buffalo Niagara medical campus, most of it is simply moving facilities from one part of town to another. But if that were net growth, it carries a dark side: it would be largely the result of an increase in demand for treatment and cure services which came from an increase in illness in the population. Ideally, what we would like to see is a contraction in this industry because it would mean that the health of the population was improving.

Environmentally, this region is blessed with world-class environmental assets such as one of the natural wonders of the world and being on the edge of one-fifth of the earth’s surface freshwater. The Great Lakes, however, are being threatened by five major forces: climate change, pollution, diversion, loss of habitat, and invasive species. Lake Erie is being degraded by plastics pollution and raw sewage — from concentrated animal feedlot operations at the west end of the lake to the dumping of four billion gallons of raw sewage into the lake at the Buffalo end. We are losing 500 acres of farmland every year to sprawl. Even though we’ve lost major industries, industrial pollution continues: the state’s highest recorded levels of benzene and mercury emissions occur in Tonawanda and Niagara Falls respectively. The only toxic waste dump in the Northeast, which is located in Lewiston, is expanding. And the region has two major nuclear waste dumping grounds. Thanks to citizen activists, there have been some recent successes in cleaning up damaged environmental assets, such as the cleanup of Buffalo River sediment by a coalition led by Buffalo Niagara Riverkeeper.

Regardless of all the problems we have, this region probably has greater potential than any other metro area in the country. Do we ever! Home to one of the natural wonders of the world and on the edge of one-fifth the Earth’s surface fresh water in a world of increasing water shortages and drought. We have a moderate climate and fertile farmland. Climate change will force millions of people to move away from coastal areas and relocate. The book Climatopolis ranks Buffalo #3 most climate resilient city in the US because of its inland coast. With all the vacant land and underutilized infrastructure in the city of Buffalo, we could easily accommodate double the current city’s population. Building the super grid in New York State would create more jobs than those lost by the closure of the Dunkirk and Huntley coal plants and then some. The super grid would also deliver the surplus wind energy from the Great Plains that they’re now giving away for want of consumers. If we could only think regionally and get together with our neighbors Toronto and Rochester, we could create a megaregion that would be the 16th biggest economy in the world. Imagine a high-speed rail link, like Elon Musk’s hyperloop, powered by renewable energy linking two of the world’s most dynamic cities — New York and Toronto — running right through the region. The megaregion around the Great Lakes including the province of Ontario ranks as the fourth-largest economy in the world.
But it’s not size we’re after but quality of life. If we moderated our binge-eating food festivals, couch-sitting sports spectating, beer-worshiping, cigarette-smoking Buffalo lifestyle, we would have a healthier, happier population.
This region was once a happening place—the world’s first city lit by electricity, home to the invention of air conditioning, six-largest port in the world, and home to some of America’s best architects’ best works. We are not yet back to being one of the world’s most globally significant cities but we could be.

Where can people purchase or otherwise obtain this book?