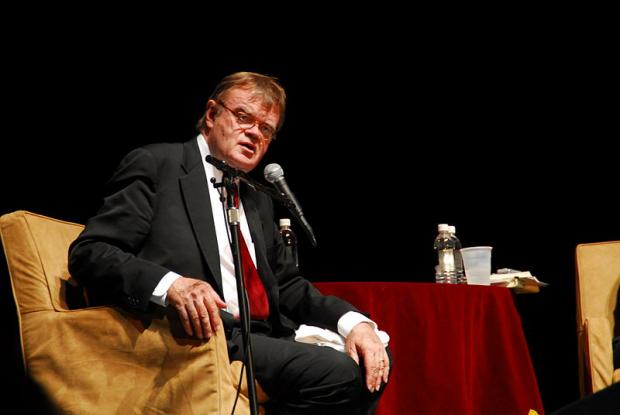 “I want to salute the city of Buffalo NY,” Garrison Keillor said on last night’s A Prairie Home Companion, noting that “Minnesota has an undeserved reputation as a champion of winter. Not so – Buffalo. That’s the city of heroes. Hope they’re OK up there. “

Very nice, Garrison, and we like you too, filling Shea’s when you’ve broadcast your popular radio show from here.

But then you entertained your Manhattan audience with this song, to the tune of “Camelot”:

“A city to the north beside Lake Erie
Where every year they get a ton of snow
It’s cloudy windy chilly dark and dreary
In Buffalo.

“They think about survival, not good living
They got eight feet of snow a week ago
What will they give thanks for on Thanksgiving
In Buffalo?

“They have seniority down at the factory
And there is a mortgage they must pay.
Although they’d like to go
To Rio Janeiro
The people are so stubborn that they stay in Buffalo.”

Maybe I’m thin-skinned after a week in which even the local news media gave the impression that the entire city was buried under snow rather than South Buffalo and points below, but I must take exception to a few lines in this ditty:

“Where every year they get a ton of snow” – no, that would be Syracuse.

“It’s cloudy windy chilly dark and dreary” – at times, certainly. But we’ll put our summers up against any in the country. Springs and autumns too.

“They think about survival, not good living” – Seriously? Can the tourist bureau remind him of all the places we took him to last time he was here?

“Life is snow and beer and meat” – yes, but much, much more. And when the meat is from Spars and the beer from one of our local craft breweries, there are worse ways to dine.

“They have seniority down at the factory” – This was the real WTF line. It’s been at least 50 years since this applied to more than a tiny fraction of Western New Yorkers.

“The people are so stubborn that they stay in Buffalo”  - hey, we know a good thing when we’ve found it.