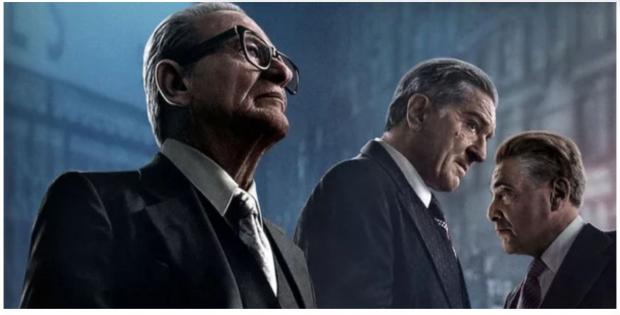 It’s fair to say that many, maybe even most filmgoers who are looking forward to The Irishman, Martin Scorsese’s epic return to the gangster genre, have one question in mind: will it be another GoodFellas?

And can you blame them? Scorsese’s 1990 film may have been dismissed by critics at the time as a retread of Mean Streets, the movie that put him on the map in 1973, but it has stood the test of time to become one of the most enduringly popular films in cinema history.

Proof that Scorsese has that concern in mind comes with the opening scene. As the Five Satins croon their 1950s hit recording of “In the Still of The Night” on the soundtrack, a bravura tracking shot takes us through the corridors of a nursing home, finally settling on an old man sitting alone at a table. He is Frank Sheeran (Robert De Niro), and he is going to tell us the story of his life, including the time he killed former Teamsters president Jimmy Hoffa. And “Crazy Joe” Gallo, too.

While much of the first hour of The Irishman, in which Sheeran graduates from a truck driver to a trusted factotum in the Pennsylvania mob, echoes Henry Hill’s upbringing, it’s less adrenalinized. There’s a somber cast to the film that takes over in its final act, depicting Sheeran’s final days in prison, ostracized by his family and guilt-ridden over the murder of Hoffa, a man he considered a friend and mentor.

Right about now, I need to point out that Sheeran’s claims to have been a mob assassin are not universally accepted. Outside of his own confession, there is no evidence that he ever killed anyone, certainly not such high-profile hits as Gallo and Hoffa.

Why might Sheeran have lied? One theory is to produce a best-selling book (I Heard You Paint Houses, written by Charles Brandt) whose proceeds would benefit his children. You can read a persuasive debunking of Sheeran’s claims at Slate; there’s a more nuanced consideration at The Smithsonian that gives lots of background for mob aficianados.

The bigger question is, why would Scorsese lavish so much time and attention on such a shaky story? This isn’t the first time in recent years that he has played with unreliable narratives, but with The Wolf of Wall Street and the ponderously titled Rolling Thunder Revue: A Bob Dylan Story by Martin Scorsese, he made it reasonably clear that you weren’t expected to believe what you were seeing. That’s not the case with The Irishman. You might argue that having Sheeran narrate his story frames it as something to be taken with a grain of salt, but that’s reaching. And Scorsese’s claim in interviews that it really doesn’t matter will send a shiver up the spine of any teacher who has had to confront students brought up on the movies’ versions of history.

Veracity aside, The Irishman is Scorsese at the peak of his powers. It’s not a minute too long at three hours and 20 minutes (not counting 10 minutes of end credits), and given the scope of what the story encompasses, which is essentially the history of post-war America, I wish it had been longer.

Spanning the 1950s through the 1980s, Scorsese (born in 1942) gets to recreate the urban America that he grew up in: diners and bowling alleys, neon signs and a cigarette in every hand, gin mills, shopping districts in the middle of cities instead of the outskirts, town cars so big that you could live in them if you had to. There are guys with names like Sally Buggs, Louie Deadbeat, Jimmy The Weasel and Paulie Brows. There’s a huge cast (381 credited actors!), and Scorsese loves the occasional slow motion scene to linger on faces.

Along with De Niro in the title role, the movie is filled with familiar faces. Joe Pesci, who reportedly turned Scorsese down 50 times before agreeing to come out of retirement to pay mob boss Russell Bufalino, is terrific, making you regret all the directors who could never make proper use of him, (Fun fact: the real Bufalino was born in Sicily but spent most of his first 40 years in Buffalo and western New York.) I would have liked to see more of Harvey Keitel, Scorsese’s first star, who is only in a few scenes as Angelo Bruno. But there are juicy roles for some actors who were just born to be in a Scorsese gangster movie, including Bobby Canavale, Ray Romano, and standup comic Sebastian Maniscalco. GoodFellas fans might recognize the actress playing Hoffa’s wife as Welker White, who was much yoiunger when she played Lois, the drug courier who refused to fly without her good-luck hat. And if you look carefully, you might even recognize who that is playing Jerry Vale in a nightclub scene: if you don’t, wait for the end credits—I won’t spoil it.

Anna Paquin fans, on the other hand, may be disappointed by how little she’s in the film. You sense that there was at least one strong scene with her, the kind of thing that might have led her to take the role, that didn’t make it to the final cut.

But then there’s Al Pacino as Hoffa. Like many of the cast, Pacino doesn’t look anything like the character he’s playing. Unlike them, he’s fitted with a weird wig and facial prosthetics that are supposed to make him look like Hoffa. They don’t. They just make him look like Al Pacino doing another wacky celebrity impersonation, a la Phil Spector, Joe Paterno, Jack Kevorkian, and of course Big Boy Caprice.

It was a misguided idea to begin with: as someone notes early in the movie, who even remembers Hoffa these days, aside that he was someone who disappeared? If Scorsese was worried that people would come out of the movie saying, you know, Pacino really didn’t look anything like the real Jimmy Hoffa—well, they’re still going to be saying that. As long as he was spending millions of dollars to digitally make De Niro look younger, could he have had those guys digitally turn Pacino into Hoffa?

It’s even harder to overlook the oddity of the physical transformation because Pacino is running at full steam here. This Hoffa is a loud grandstander who loves to play to crowds and seems to have no filters. He so detests the Kennedys, whom he feel he put in the White House, that when he sees the American flag over the Teamsters’ headquarters lowered to half-mast after JFK’s assassination, he orders it run back up. You get the feeling that the mob ordered Hoffa killed just because he was such an obnoxious asshole. (Pacino will be perfect to play Trump in the inevitable movie.)

I rattle on about Pacino because, let’s face it, it’s easy to do. It’s not that he isn’t fun to watch, but he sucks all the oxygen out of any scene he’s in. Still, he doesn’t do the movie serious harm.

N. B. You have one week to see it in a theater (either the Dipson Eastern Hills or North Park) before it moves to Netflix. If your only reason for waiting to see it at home is that you feel three hours and twenty minutes is too long for a movie, I say go for it: it’s 2 minutes longer than The Seven Samurai and 20 minutes shorter than Once Upon a Time in America. Only bad movies are ever too long—and this is not one of those.

UPDATE: I was wrong about it only playing for a week. Both the Dipson Eastern Hills and the North Park are holding it over for a second wek, and it’s likely to run as long as there is demand for it. (Which doesn’t mean you should wait too long, as it’s unlikely to last any longer than the onslaught of awards season movies in December.)