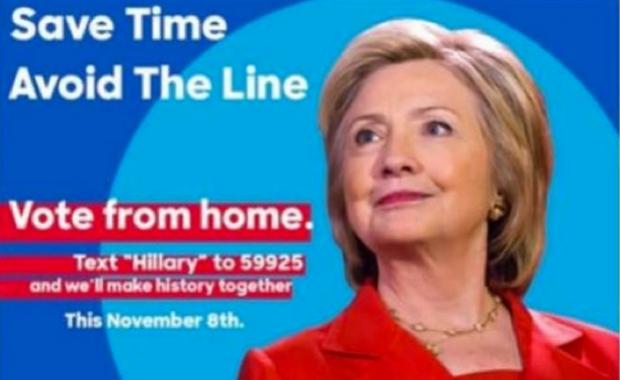 Remember when Donald Trump told his supporters to vote on November 28th? Lots of people opposing him pounced on that error, posting memes to Facebook and Twitter reminding Republicans to vote on that incorrect date. I don’t find that funny.

I hate trickery like that, because it’s a lie, it’s unfair, and it preys on people’s ignorance. Playing by the rules is better, (which is perhaps a big reason why the Democrats are in decline.) It, therefore, follows that responsible Republicans would avoid promoting or posting false information about how and when Democrats would vote for Clinton. But in the days leading up to the election, a meme urging (more like “reminding”) Democrats to “stay home” and vote “by text” for Hillary Clinton circulated among the less responsible, more vicious corners of the right wing web.

The meme in question was cleverly designed to look like an official missive from the Clinton campaign — it had the right font, the right color scheme, and looked at first glance to be completely legitimate to the untrained and poorly informed eye.

As it happens, an elected, sitting Republican Assemblyman posted and shared this false meme to his then-public Facebook page. David DiPietro (A-147) is credited, in part, with getting Donald Trump involved in politics in the first place. He was one of the travelers in the ring-kissing junkets from Buffalo to try and convince Trump to challenge Cuomo in 2014.

So, this is what this sitting Assemblyman — someone you’d expect to be a responsible adult - posted, Spreading this kind of misinformation and lies is unbecoming an elected official. People who act as the people’s representatives should be above petty stunts that would disenfranchise even the stupid. If you’re not in the tea party, he doesn’t represent you — he doesn’t even purport to represent you. Shame on David DiPietro, the seat-moistener who represents guns and stupidity more effectively than he represents people.