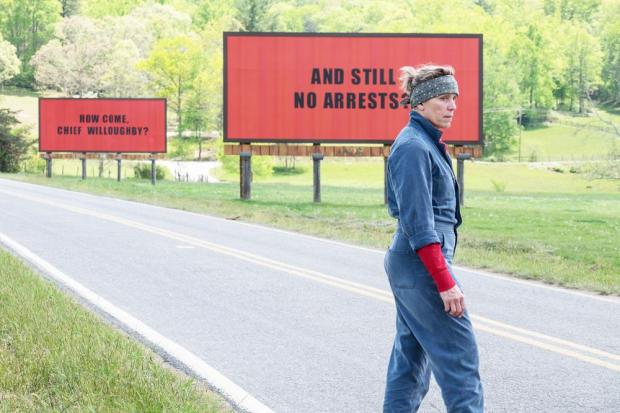 Martin McDonagh’s Three Billboards Outside Ebbing, Missouri opens on a quietly bucolic scene. The countryside is spaciously empty, softly lambent, and misty. A soprano sings something ethereal on the soundtrack.

This only lasts a matter of seconds, and if you know anything much about McDonagh, you’ll probably suspect that this effect is, shall we say, deliberately misleading. And of course it is. Playwright-movie director-screenwriter McDonagh customarily provokes, startles, unsettles, even repels, often with sudden violence. In a session with a New York Times interviewer years ago, he described his theatrical approach as, “Guns. Explosions. Blood.” All three can be found in Three Billboards, his third feature, in varying degrees.

It has to be conceded that he seems, in his own fashion, to have tried to introduce a different spirit into his movie. Dare I say it’s a humane one? Of course, McDonagh offers clemency and charity on his own idiosyncratic terms.

About those billboards: Mildred Hayes (Frances McDormand) has probably been driving past them on her way home for years, until one day, very early in the picture, she stops. She has hit upon a use for them.

Mildred is a grieving mother, burning with barely suppressed anger. Sometimes she lets that rage out, to the discomfit or even physical injury of others. About a year ago, her 17-year-old daughter was raped and murdered along this very road, and no one has been charged. Mildred fears the local police have let this hideous crime become a cold case. In boldly black lettering on a blood-red background, she accuses Sheriff Willoughby (Woody Harrelson) of failing to do his duty after her daughter was “raped while dying.”

Mildred is neither deterred nor abashed when her embittered protest is met with disapproval by much of Ebbing. Nor is she to be reasoned with, as Willoughby tries to do, even noting that he is seriously ill. Mildred already knows, and responds that the message “wouldn’t be as effective after you croak, right?” as he stares at her in disbelief then retires in resignation. Mildred has become an inflamed avenging angel, annealed by furious sorrow.

She’s also bitterly funny, on occasion. As unlikely as it may seem, this movie is meant to function as a dark comedy, although its wit and humor are likely to leave you uneasy. When her parish priest comes to tell her of the popular disapproval of what she’s done, she compares his role in a church that has covered up crimes against youngsters with the Crips and Bloods gangs in Los Angeles, and bids him leave her home.

Sam Rockwell’s racist deputy Dixon quibbles over Mildred’s asking him how “the nigger-torturing business” is going by telling her, with no intended irony, that it’s called the “persons-of-color-torturing business these days.” Rockwell’s performance as this belligerent doofus has been lauded by critics and festival audiences. He’s expansively effective but the role’s changing facets indicate the sometimes ungainly amalgam of elements McDonagh has contrived. Against the odds, McDormand has managed to sustain her remarkable portrayal, even as the movie drives her character beyond the borders of implausibility. (The most normal character is Harrelson’s restrained but compellingly rendered Willoughby.)

McDonagh directs in a careful, conservative style and his cast performs impressively, but the behavioral extremes he has imposed on the characters, especially on Mildred, work against his gathering introduction of a sort of redemptive theme, and an irregular grace he grants them. He’s tried too hard to juxtapose divergent moods, ranging from an adolescent-like mischievousness to domestic melodrama.

Three Billboards never actually stops being interesting, but it also never coheres and its excesses became distracting and burdensome for me.