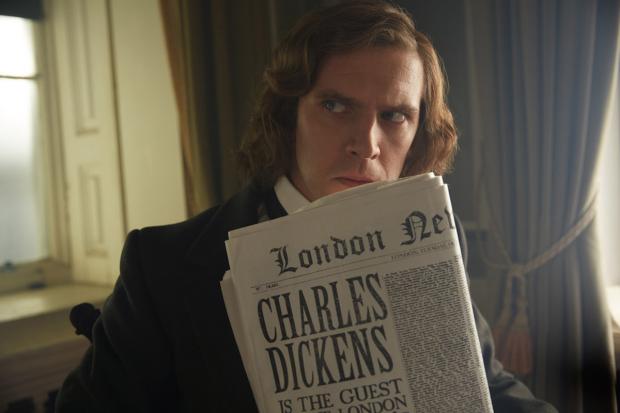 Funny how you wake up one morning to find that the holiday movie season is upon us. These means that, for a few weeks, Hollywood will eke out a handful of movies to qualify for awards, of which there are rather more than there are films worthy of them.

Because Hollywood has become consumed with the making of CGI-driven comic book adaptations, it no longer really knows how to make serious movies. They closest it can come is to finance movies based on real people and events, such being the opposite of the unreality that is making them so much money. So in the coming month we can look forward to The Greatest Showman, about P. T. Barnum, Darkest Hour (Winston Churchill), The Disaster Artist (bad movie auteur Tommy Wiseau), The Post (as in Washington), All the Money in the World (the John Paul Getty III kidnapping), and I, Tonya (Tonya Harding).

Following close on the heels of Goodbye Christopher Robin, about Winnie the Pooh author A. A. Milne, we now have The Man Who Invented Christmas, about Charles Dickens, writer of probably the most popular Christmas novel of all time, A Christmas Carol. Dickens certainly didn’t invent Christmas—it was around for at least 1,500 years before he ever put pen to paper—but he arguably drove the modern conception of it as an event for family celebration, charitable given and saying the words “Merry Christmas,” a phrase he did indeed invent.

We first encounter Dickens (Dan Stevens) as a pre-bearded young literary being feted on a tour of America, where Oliver Twist was a big hit. “Never was a king or emperor so cheered!” he gushes in his diary.

A year later, though, the applause has died, and he’s back home in London. His last three books have been flops, his publisher wants another best-seller, and bills are starting to pile up. What, oh what is he to write next?

In one of those sequences that screenwriters like to think shows how novelists get ideas, Dickens concocts the idea of A Christmas Carol from a night observing the London locals. (To go by what we see here, Dickens’s scullery maid, a local undertaker and the cranky husband of an admirer could have sued for the profits.) For the benefit of viewers who may not recognize the appearance of lines that will show up in the soon-to-be-written fable, Stevens reacts to each of these moments by popping his eyes wide open to indicate, Ah, I must use that! (It’s on page seven of the Master Thespian Guide to Screen Acting.)

Deciding on the name Scrooge for his protagonist, Dickens conjures the fellow up (in the always welcome person of Christopher Plummer) to hold conversations with him. He does the same with other characters, some of whom object to the way the story is going. For a moment I thought this movie was going to turn into Truly, Madly, Deeply, where you Anglophile film buffs (because who else would be reading this review?) will recall Alan Rickman and the other ghosts conjured up by grieving Juliet Stevenson stuck in her living room watching videos. Alas, not to be.

Dickens’s reputation as the great humanitarian is tested by the presence of his father (Jonathan Pryce), who hasn’t changed much from the dreamer whose poor financial habits sent the family to debtors prison and young Charles to work at a boot blacking factory at the age of 12. Will father and son make up by the end of the movie? Who would be so foolish as to bet against it?

The Man Who Invented Christmas is unlikely to become a classic that families will revisit every December, but it serves its purpose as a pleasant adjunct for those years when you need to take a break from Alastair Sim (or Albert Finney or George C. Scott or Bill Murray or, god help you, Jim Carrey.) Ireland substitutes reasonably well for Victorian London, and there are the expected handful of familiar British character faces (Simon Callow, Miriam Margolyes, Bill Paterson) to liven up the proceedings.