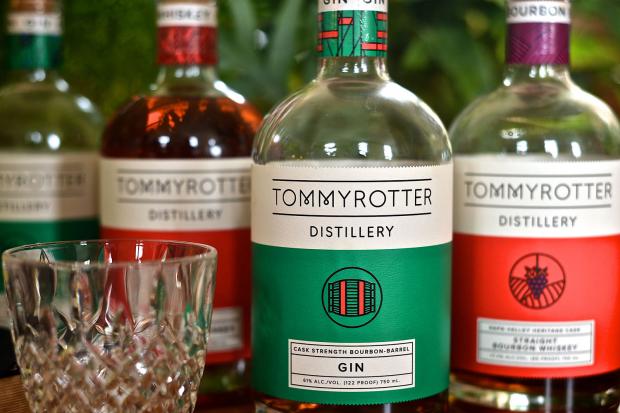 So I googled “The Tommyrotter’s Club” and found zilch. This almost never happens. I got Matthew McConaughey’s fan page (no clue as to why), an Austrian soccer player (same name), and pages of links to Buffalo’s Tommyrotter Distillery (of course). After some analog investigation, it turns out that the entire written record of the Tommyrotter’s Club comes down to a few scant sentences in a book about the Roycroft Movement. The club was a splinter group of merry craftsmen who lived on the Roycroft Campus, but who “sought adventure, mischief and inspiration in nature.” They apparently held uber-high standards of craft, created stuff for creating’s sake, and carved out a niche on the fringe of an already-fringe group. Sounds like a fun club, and surely Tommyrotter is a fitting namesake for an independent distiller of bold, rebellious spirits.

Tommyrotter Distillery now resides in the F. N. Burt building, a former paper box factory in Buffalo’s historic industrial district. By 1919, the general manager was a woman (who couldn’t vote) and the factory went on to produce as many as four million boxes a day. Both of those claims sound like legends, not unlike the Tommyrotter’s Club itself, but in this case the facts easily check out. I was lucky enough to get a tour of “The Bert” when it was being refurbished, and the building is the epitome of post-industrial urban revitalization: core structure, patina, and ensuing nostalgia preserved; outmoded guts replaced with high-tech systems costing tens of millions; an architectural remnant renovated to serve chic urban dwellers and forward-looking businesses, such as Tommyrotter.

Just as nostalgia, whimsy, and rebelliousness infuse the stories of Tommyrotter and its fabled building, these qualities also show up in Tommyrotter’s spirits. These are old-school libations—gin, vodka, whisky—brilliantly revamped to offer a playful, unabashed, and complex flavor profile. We might even call them revitalized spirits.

A great example of these boldly reimagined liquors is Tommyrotter’s Cask Strength Bourbon-Barrel Gin. Gin is a varied and complex thing, so I won’t bother with taxonomy; however, this Bourbon-Barrel Gin is similar to an Old Tom gin. These smoother, cask-aged gins were popular until prohibition, and then faded out until being revitalized (that word again) in the late ‘oughts by smaller distilleries. The wood casks give the gin its amber color, and by using bourbon barrels, Tommyrotter’s version carries the flavor of both gin and whisky in near perfect balance. It’s truly like drinking two types of spirit simultaneously, and it’s utterly delicious, even neat, and certainly on ice.

Taking a straight splash of the Bourbon-Barrel Gin, our tasting partners for the evening found nutmeg, smoke, and spice mingling with the botanicals. “Lovely for winter,” rolled off the tongue of one taster, inspiring her husband to say, “Yeah, this is a fall/winter gin.” For most Americans, gin remains a summer spirit—G&Ts, Tom Collins, and so on cool and refresh us—but Tommyrotter’s Cask Strength Bourbon-Barrel Gin begs for different treatments. It could easily replace bourbon in a mixed drink, and the Negroni I put together with it was half-way to becoming a Boulevardier.

Negroni on the Boulevard

Shake in ice until your hands hurt from the cold, serve in chilled rocks glass over large ice cube with orange peal garnish.

Such experimentation is rewarded with the Bourbon-Barrel Aged Gin, but one might also seek out vintage cocktail recipes that call for Old Tom gin; there are a slew of them available online ready to surprise and treat guests at a holiday party, for example.

Tommyrotter’s American Gin is a more traditional colorless offering with a bold bite followed by bright menthol, juniper, lavender and violet (if you know those old purple Violet candies, then you know). Far from a dry gin, the finish is surprisingly clear, with a touch of citrus on the way out. Used in a gimlet with fresh lime juice, the citrus moved forward and the botanicals came into perfect balance. Complex, bold, and fun, it’s easy to see why the Tommyrotter American Gin scores so high at competitions across the US. This is a fine choice whenever a botanical gin is called for, but it’s clean enough to also stand in for a dry gin, giving, say, a dirty Martini a playful update.

“Legit” isn’t a word you hear much in tasting sessions, but I knew what our tasting partner meant as he commented on the Tommyrotter Small Batch Vodka. Another guest—a man who knows his Hayman’s from his Hendricks—came out with this doozy: “The most profound thing is the lack of adjectives it brings to mind.” He was right, yet we tried: mellow, laid-back, round, soothing, happy, and my note of the evening, “a perfect basis for showing off mixes.” You’d think the stuff was water the way we were talking, but the Tommyrotter Small Batch Vodka is full-bodied, even buttery. In my opinion, this vodka does what all great vodkas do; it approaches full transparency while offering up subtle, round flavor without slapping you across the face. Legit, indeed.

We dove into our vodka gimlets happily, but our “legit” guest dashed some Tuthilltown’s Bitter Frost in there, and his drink took off in a totally new direction, with sarsaparilla drawing out the vodka’s subtle butteriness. It really is a great basis for experimentation.

Buzzed and happy, our guests had to respect their designated drivers’ need for sleep, so I ended up tasting Tommyrotter’s two whiskies—their American Whisky and a Straight Bourbon Whisky—on my own. Incorporating them into my usual pace of leisurely evening drinks was a luxurious experience.

The debate over drinking any whisky (scotch, rye, bourbon, etc.) neat or on the rocks rages on, but the simple answer, of course, is that both are fine and that it’s a matter of preference. I’d go further to argue that some whiskies show their best side taken neat, others on the rocks, and that generalizations, predictably, just spur debate.

Aged in Napa Valley casks, I imagine this is what adds a deeper caramel flavor and spice to Tommyrotter’s Straight Bourbon. Neat, it is fiery, sending spice across your nasal passages and warming the belly—perfect next to the fire on a cold night. On the rocks, however, the Straight Bourbon opens up its caramel center, pushes the bite to the side of the mouth, and demands less and gives more. It’s not to say that I didn’t enjoy it straight, but its as if the burn of the straight sip gets unpacked and slowed down by the melted ice—a fine result. So, I would recommend Tommyrotter Straight Bourbon on the rocks as a great stand in for any whisky, even a sweeter Scotch, like Macallan 12, and as a notable step up from any less subtle mid-shelf bourbon.

The Straight Bourbon carries an irreverent, complex and bold flavor that is akin to the Tommyrotter Cask Gin. Both drinks stand out as emblematic of the Tommyrotter approach to distilling: casks from other disciplines, highly complex flavor profiles that expand their respective genres while remaining well within bounds. In other words, these are adventurous but tasteful interpretations. The Straight Bourbon and the Cask Gin are like liquid tributes to that splinter group of yesteryear—out on the fringes, but still attached.

Tommyrotter’s American Whisky is the mellow pooch in the litter. It is triple-barrel aged, and the woodiness is a big part of the flavor here. Smoother and slower to open up than the Straight Bourbon, taken neat, the American Whisky doesn’t conquer your face as much as it seeps into your head—a wonderful buzz that reminds me of a well-proportioned wasabi hit during Sushi. On ice, the American mellows significantly, with the spices hitting a good ten seconds after a swig. This is a whisky I’d drink neat while snuggling up with a good book, and on the rocks it’s easy-drinking enough to stand in for wine or beer before dinner. Of the two Tommyrotter whiskies, it’s the American Whisky that could be my everyday drink.

It took me a minute to figure out what tied these five spirits from Tommyrotter Distillery together. In the end, those few sentences about some merry artisans sub-diving their sub-culture into a tiny group united by a shared rebelliousness and uber-high standards do, indeed, sum up the spirit of these spirits. Buzz on, Tommyrotter. We’ll meet you in the woods; you bring the booze.