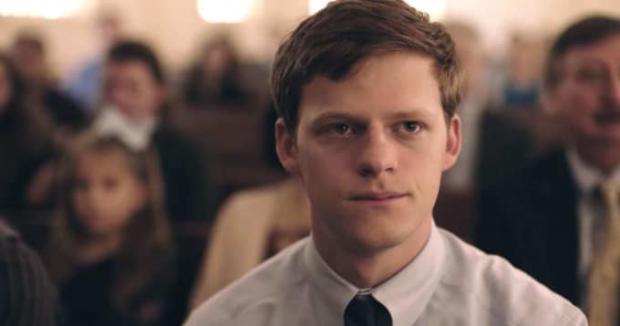 Just when it had begun to seem that years of climate change had made it safe to come out, there comes news to remind us that it still isn’t for some, perhaps a lot of people. A recent report about a Canisius College sophomore whose parents disowned her when they learned she is gay, a response that directly and indirectly jeopardized her scholarship, cross-county team membership, and student status, is a reminder of enduring fears and hatreds. The student’s parents demanded she seek counseling.

Writer-director Joel Edgerton’s Boy Erased portrays the experience of a young gay male who underwent “counseling” at a gay conversion program in Arkansas. Jared (Lucas Hedges) is a talented athlete, scholar, and aspiring writer in his first year of college who is betrayed by a guilt-ridden, unstable classmate after they have a sexual encounter (that amounts to a rape), the innocent Jared’s first. The perpetrator outs him to his parents, with expectable results.

Feeling guilty and overwhelmed by the ultimatum of his Baptist preacher father (Russell Crowe) and his tacitly agreeing mother (Nicole Kidman), Jared agrees to enroll at Refuge, a Christian-based conversion therapy program headed by Victor Sykes (Edgerton). It features a Maoist-like insistence on confession of sin, constant monitoring of even incidental behavior for signs of sodomitic susceptibility, and almost comically heavy handed tutoring in “masculine” comportment (for example, how to correctly place your hands on your hips in a non-sissy way) led by an aggressively grim martinet (played by the Red Hot Chili Peppers’ Flea). These sequences are more repellently absurd than funny. (They may recall some of the scenes in another recent gay-conversion movie, The Miseducation of Cameron Post.)

The scenes in Refuge are really the heart of Boy Erased and the best written and directed, which eventually is a problem for the film. It’s often involving as it chronicles the indignities and abuse imposed on Jared and his peers, but the picture is unbalanced. It has a vagueness and a sense of incompletion. Edgerton adapted Garred Conley’s 2016 memoir and inevitably has focused on his story, but here that story’s family content doesn’t feel real or compelling enough. We don’t get a sense that Kidman and Crowe are a loving long-time couple, and since the mother’s emotions and decision prove crucial, this is a felt absence. Likewise, the final confrontation between Jared and his father comes across as too cool and subdued, and, ironically, a little unfair to the parent.

Edgerton seems to have had some difficulty trying to edit and dramatize the book’s material. Boy Erased is too careful and even-toned when it needs to have emotional force and insight.