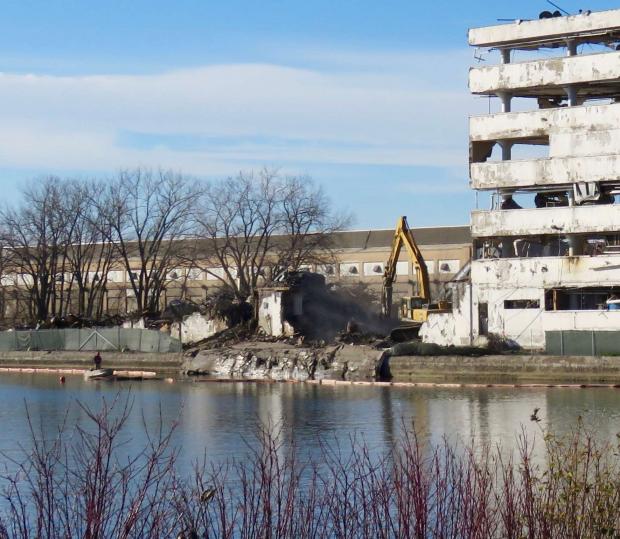 The collapse of the being demolished Freezer Queen building into the Small Boat Harbor, November 17, 2016 Photo by Jburney
by
Jay Burney
/ Nov. 20, 2016 7am EST

There has been a lot of support in this community for taking a harder look at various development projects through the lens of the State Environmental Quality Review Act (SEQRA). This includes a focus on the new Buffalo Green Code, which may be adopted in a matter of days, and Outer Harbor development by private firms and the State of New York’s Empire Development Corporation’s local subsidized partner, the Erie Canal Harbor Development Corporation (ECHDC). SEQRA is a tool that allows the public to challenge the environmental and social consequences of development. This tool can be used to encourage developers, at their own expense, to do more detailed evaluations regarding impacts and remediation strategies of projects. Sadly, government—including the Buffalo Planning Board, the Buffalo Common Council, and the Erie Canal Harbor Development Corporation often act as the SEQRA agents for developers. There is no other way to put it: The state and the private developers have a symbiotic relationship. The general public is often left on the back burner in this relationship.

(Everyone is savvy to the operations of contemporary political power, and holding on to that power is a powerful motivator. Everyone may be shocked, just shocked, but we all know that pay-to-play is a burgeoning scandal that may have played a role in costing the Democrats the election.)

More often than not, SEQRA scrutiny is avoided by the state and private partnerships. The public is persistently finding ways to engage in transparent and public dialog about these issues. Voices are growing in strength to push accountability by the goverment agencies and their private partnerships. One group, Our Outer Harbor, is hosting community meetings in order to engage the state in transparency about the Outer Harbor. Citizens and important organizations are standing up to say SEQRA belongs to all of us, and all of us need the opportunity to take harder look at projects in our community.

A good example this week is the Queen City Landing project on Buffalo’s Outer Harbor. This project, a 23-story glass residential tower to be built on a contaminated trash landfill next to the Safe Harbor Marina, a.k.a. the Small Boat Harbor, received approval from the Buffalo Planning Board.

Dozens of rational and concerned citizens brought an enormous amount of evidence to the table that this project deserved a harder look under SEQRA.  Wide-ranging issues include public costs, public safety, and critical environmental concerns. The city denied this harder look.

A group of citizens (including this author) and Buffalo Niagara Riverkeeper, brought a lawsuit against the city and developer. This suit is making its way through the courts.

This week, one of the concerns of the petitioners came to reality as a portion of the structure, in process of demolition, collapsed and fell into the Small Boat Harbor waters.

The petitioners as well as many hundreds of citizens have been concerned about environmental, public safety, and health issues affiliated with the fast tracking of this demolition project. This includes asbestos removal, demolition plans, and remediatiion commitments.

At the time of publication, we do not know what kind of damage to the environment that the material that collapsed into the water carried with it. We do not know how this will affect fish spawning areas affiliated with this site, or the safety of fish caught in this popular fishing area.

As of now, the public is paying real public dollars for this project’s fast-tracking and its abject dereliction of common sense. We would be shocked, just shocked, if the DEC does not come up with an appropriate remediation strategy for this toxic and dangerous collapse. What about other plans, studies, or promises related to building a 23-story building on a sinking former landfill in prime fish habitat? We also would be shocked, just shocked, if a fine for both the developer and the city will come out of this. Better get out our checkbooks.

Art Giacalone, the attorney who is handling a portion of the SEQRA lawsuit, has just published a fascinating account of how this project has been abetted by both local government idiocracy and a media that is a cheerleader for telling us what to think while looting our pockets in favor of a few developers who pay to play and avoid the consequences of public and transparent accountability.

Read  Giacalone’s piece here: “No Sympathy For the Devel(oper) but Concern for the Outer Harbor.”

On another note entirely, we are pleased to bring you a wonderful video that we shot this week near Buffalo’s waterfront. This video shows a murmation of starlings photographed near the Tifft Street Bridge at dusk on November 17.

Murmurations are strange and exotic behaviors of flocks of starlings that some scientists compare to large fish schools that have been observed in the oceans. There are math contexts that scientists use to explain the actual events. Often these behaviors are thought of as a reaction to predators and the swarming activity acts as a defense mechanism which suggests that there is safety in numbers.

Personally I look at this as social behavior. I have observed giant flocks of birds when there is a predator such as a peregrine falcon in the area. I have photographed this behavior, for instance when Bonaparte’s gulls are threatened by a Peregrine along the Niagara River during migration. They are amazing to watch and indeed it does appear that the behavior of these defensive flocks helps to organize the flock against an attack. However, I think of the murmuration of starlings differently.  These murmurations often happen at dusk, and at the end, the birds settle down to a nighttime roost. The many hundreds of birds in this murmuration are communicating through vocalizations that are at once very widely noticed and are very intimate. Perhaps this is bonding behavior as the flock settles for a long dark and cold night. Scientists say that each bird is networking with the entire flock, and more intimately communicating with their directly adjacent neigbors. Each bird watches and reacts to the neighbor bird and the result is awe-inspiring artful display that is wondrous and dreamy.  At one point you will even see a helix form and dissipate. This is the apparent circumstance in this video.

More on the Murmation of Starlings:

The Murmation of Starlings —Atlantic Magazine

How Do Starling Flocks Create Those Mesmerizing Murmations? —All About Birds, Cornell Laboratory of Ornithology

The Startling Science of a Starling Murmation  —Wired