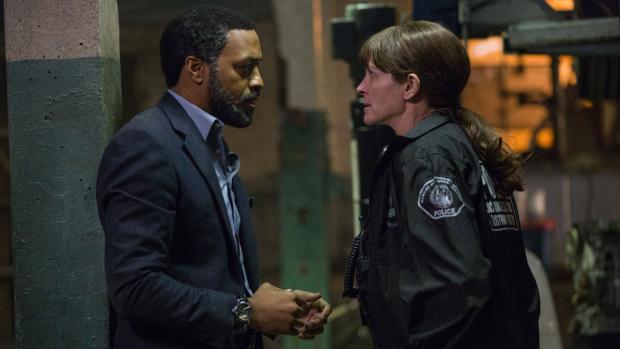 If there’s a genre that I try to avoid, it’s the revenge movie. Not so much a film like this summer’s The Gift, in which a wronged person plots a psychological payback, but the whole Walking Tall genre in which we’re shown a monstrous person or persons committing heinous acts in order to get us to relish a similar level of violence being directed at them.

You would be forgiven for thinking that’s the kind of movie that Secret in their Eyes is. It certainly seems heard in that direction in the opening sequence, which intercuts several actions including the brutal rape and murder of a young woman. (Taking your seat five minutes after the film starts is not a bad idea.)

But while this is a movie built around the desire for revenge, it certainly doesn’t present it as something to be encouraged, nor for the audience’s vicarious bloodlust.

Liberally adapted from the Argentine film that won the 2010 Oscar for Best Foreign Language Film (so liberally that I didn’t recall I had seen the original until I got home from the screening and checked my notes), Secret in Their Eyes unfolds in two time frames, 13 years apart. In 2002, Ray (Chiwetel Ejiofor) and Jess (Julia Roberts) are working for an anti-terrorism task force in Los Angeles. It’s four months after 9/11, and paranoia is high that LA is the next target. New to the team is Claire (Nicole Kidman), their supervisor in the DA’s office.

Their routine is broken when single mother Jess’s teenaged daughter is found murdered in a dumpster next to the terrorist cell they have been secretly monitoring. Jurisdictionally the case is a mess, and the powers that be are more concerned with finding terrorists than investigating a murder (a choice I would explain but it involves giving away too much of the plot).

As this unfolds we also see the trio in the present day. We understand that the original investigation led to nothing. Ray moved away to Manhattan, but continued investigating on his own. He returns because he thinks he has found the killer, which is not news that anyone is prepared to hear.

Secret in Their Eyes is not one of those thrillers that keeps a laser focus on its target. For a while it seems to be drawing parallels between social and personal quests for revenge. It’s thickened by our growing realization that there is something unsettled between Ray and Claire. In the end, a lot of these threads turn out to be red herrings; coming the week after the recent events in Paris, the movie is likely to disappoint some audiences who will be concentrating on the aspects of it involving the hunt for terrorists.

Unwieldy as the story eventually turns out to be, it’s engrossing as it goes along to a climax that you probably won’t be expecting. The camera gets a lot of mileage out of peering at Ejiofor, who may have the most empathetic face in modern cinema. (Denzel Washington was the producer’s first choice for the part, which leads me to assume that they specifically wanted an African-American actor for the part; why is something you can discuss among yourselves.)

Revenge is more forcefully denied in the documentary The Look of Silence. Its backdrop is the aftermath of the military junta in Indonesia in the mid-1960s, when as many as a million people were massacred by thugs and vigilantes working for the government. A CIA report ranked it with the excesses of Stalin, Hitler and Mao. Yet there has never been an accounting; the events were swept under the rug of history and the killers kept their places in their communities.

In 2012 filmmaker Joshua Oppenheimer collaborated on The Act of Killing, a perverse documentary in which some of the worst of the surviving killers were invited to re-enact their deeds as movie scenarios. It’s a movie that chillingly illustrates the phrase “History is written by the victors.”

A companion piece to Act, Look follows Adi, an optometrist whose brother Ramli was killed in the genocide. Under the guise of examining their eyesight, he meets the killers and speaks with them. The results are, at least on the surface, much more sedate than Act, but no less horrifying. As troubling as the details of Ramli’s death are (unfolded over the course of Adi’s conversations), worse are the unrepentant attitudes of the killers, who have been given no cause to examine their consciences in the ensuing 50s years. Adi and Oppenheimer take a non-judgmental approach to their interviews, which results in answers of excruciating casualness.

Presented by Cultivate Cinema, The Look of Silence will have one screening next Tuesday night at 9:30pm at the North Park. The time is a bit inconvenient, but it’s worth the effort.