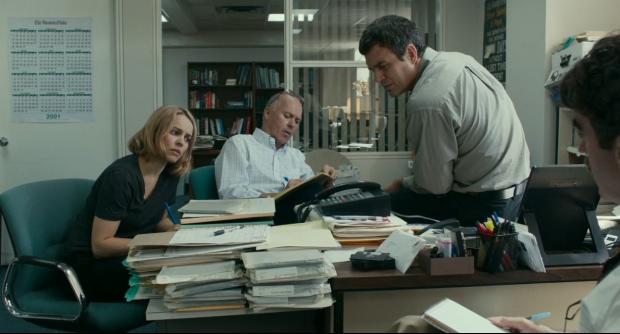 Election cycles seem to rev up popular resentment of the Fourth Estate, something we’ve witnessed in the recent complaints about reporting of questions regarding the accuracy of presidential candidate Ben Carson’s autobiography. These spikes in protest and condemnation should be considered as examples of much of the American public’s longstanding suspicion of and disrespect toward mainstream journalism. It regularly ranks low in surveys of the degrees of popular esteem in which various professions and institutions are held. The advent of personal digital connectivity has only exacerbated people’s disapproval of and indifference to the media, especially on the right. It’s probably too much responsibility to lay on Tom McCarthy’s engrossing, excellently wrought Spotlight to expect it to cause a significant recalibration in that adverse opinion, but the movie could serve as a corrective for the fair-minded.

Spotlight is one of the very best movies ever made about the working press (as opposed to the preening entertainment personalities, opinion pushers and bombastic bloggers who now pass themselves off as journalists). In incisively selected details and tension-building fashion, it tells a hell of a story, illustrating along the way what a major news organization with its great resources can do to challenge and at least temporarily reduce the disparities in influence, information and authority between the powerful few and the rest of us. (That this happens much too infrequently is a story for another day.)

The movie’s title is the name of an investigative unit at the Boston Globe and Spotlight is about its efforts in 2001-02 to uncover and report on the sexual predation on children and adolescents by Roman Catholic priests in Boston, and the diocese’s long-running cover-up of this illicit and illegal activity by its clergy. The Boston church maneuvered to keep the victims and their families silent, and the faithful, along with almost everybody else, ignorant. Its secretive in-house response s include church-approved “treatment;” transfer of offending priests, private undisclosable payoffs and even, on occasion, visits to complainants by  Cardinal Bernard Law (played with a kind of chamber of Commerce unctuousness by Len Cariou).

Except it wasn’t really an entirely closely held secret. Some members of the clergy and Catholic lay establishment, including members of the bar, knew enough to try to protect themselves from recognizing the magnitude of the corruption and injuries. As lawyer Mitchell Garabedian (Stanley Tucci) observes, “It takes a village to raise a child, it takes one to abuse him.” It’s one of Spotlight’s persuasive elements that it doesn’t hold the Globe blame-free. Somewhat embarrassingly, the paper’s earlier carelessness had led it to ignore tips and solid information about this potential large-scale scandal.

It’s a newly installed editor from out of town, Martin Baron (Liev Schreiber, very nicely low key), who brings the topic to the attention of the Spotlight crew: leader Walter  “Robbie” Robinson (Michael Keaton), Mike Resendes (Mark Ruffalo), Sacha Pfeiffer (Rachel McAdams), and Matt Carroll (Brian d’Arcy James). As much to humor Baron as anything else, they start looking into the matter. Soon enough, they’re deeply intent on finding out the facts in a complex, expanding and daunting story. When they identify a possible fourth guilty priest, Robbie and his reporters are briefly triumphant, but they don’t know what they have or where its leading. Through dogged, systemic investigation, and some luck and inspiration, they eventually find themselves with a list of at least 70 suspects, and hundreds of cases of abuse.

Spotlight isn’t really about this reporting feat, or at least not only about it. Baron has told the team to focus on the institution, the church: That, he says, is the real story. And Cardinal Law’s primary responsibility for the cover-up and replication of the abuse becomes increasingly obvious. Early on, Baron pays a courtesy call on the Cardinal and the Jewish editor is given a left-handed gift to help him acclimate himself to his new surroundings: a Catholic catechism guidebook. It’s also, of course, a kind of soft-pedaled warning. As Robbie notes on one point, 53 percent of the paper’s readership is Catholic. One of the film’s implicit points is that it took an outsider to discern what the real story was.

McCarthy and his co-writer Josh Singer also briefly but importantly acknowledge that the corruption often impacted kids and families who were already among the most unfortunate, lending the story an aspect of class exploitation. This is preceded by a subdued but tellingly effective pre-credits sequence set in 1976. The picture dramatizes real-life events that had moral consequences, but the film isn’t overburdened by a sense of its own seriousness. It’s consistently involving, probably a lot more so than many people will expect, given its detailed focus on journalistic investigation and its historical soundness. Its characters, principal and subsidiary are sympathetically and persuasively rendered. The Globe’s Spotlight unit worked as a team and the movie gives us an ensemble of performances that work individually and together. This is a film about people; it keeps a humane focus even as it generates drama. McCarthy keeps things pacey with cross-cutting and skillful shaping of scenes.

There may have been some dramatic liberties taken, but Spotlight rings true time and again.