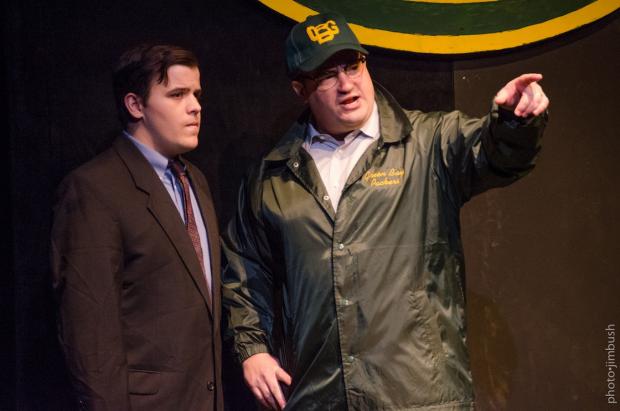 “Gentlemen, we will chase perfection, and we will chase it relentlessly, knowing all the while we can never attain it. But along the way, we shall catch excellence.” So said Vince Lombardi, legendary head coach of the Green Bay Packers football team during the 1960s.

Eric Simonson, author of Lombardi, is far from the first person to use football as a metaphor for life. And human imperfection is certainly at the heart of all drama. Simonson’s achievement is to filter these ideas through the irascible yet remarkably charismatic personality of Vince Lombardi and his wife Marie.

The anchor of the MusicalFare production, directed by Randall Kramer, is a solid and captivating performance by Matt Witten in the title role. With a compact physicality and a booming voice, Witten embodies the man so fully that at times he seems to be getting larger, in the way an actor does when a movie camera comes in for a close-up. This is a presence that we suspect could intimidate nature itself—though we will learn, at the conclusion of the evening, that nature will be Lombardi’s downfall.

With Witten’s performance looming so large, it becomes unimportant that the various team members in this production seem to blur together, and we can forgive the fact that lovely Susan Drozd is about 20 years too young for the role of Marie and comes across as more coarse than stoically world-weary. As the title suggests, this play is about Lombardi.

While many of Lombardi’s most familiar quotations are about “perfection,” the theme of this play is actually “imperfection.” The man may have been the greatest football coach who ever lived, but this play suggests that his own children disliked him, that the success of his marriage was entirely dependent upon the patience, sacrifice, and sympathetic insight of his wife, and that he was his own worst enemy.

Moreover, Lombardi’s efforts to control every element of his world—his children, his high-spirited and self-indulgent players, his wife, and even the reporter for LOOK magazine (played by Tim Goehrig) who has come to write a profile of him—are all doomed to failure. Nothing in this life is truly perfect. Nothing can be entirely controlled.

The frustration of Lombardi’s life is that he knows this, and yet he is driven by his Jesuit education to pursue excellence relentlessly.  This is a man who attends daily mass and agonizes over every failure, no matter how minor.

The critical consensus about this play has generally been to say that it is a highly flawed work that provides thrilling opportunities for actors. While I agree with the later part of that assessment, I think when we follow the spine “to pursue perfection,” Simonson’s play emerges as an astute and inspiring modern tragedy. A perfectionist is one who takes pains and gives them. This was the tragic flaw of Vince Lombardi, and also what made him great.

The MusicalFare production of Lombardi continues through November 23 at 710 Main Street Theatre.