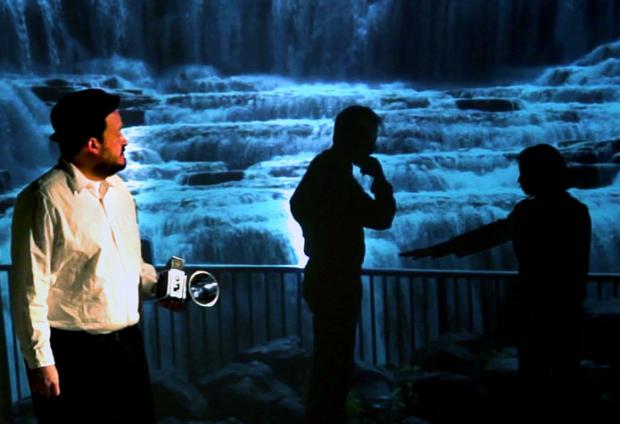 The local arts collective Sugar City has led a nomadic existence since losing its old Allentown haunt over a year ago. While waiting for their Niagara Street space to be built up to code, they’ve set up in various places, including a former food store a few storefronts down, and most recently across the street in the complex that houses the Resurgence Brewery and the B&TC Art Gallery.

That’s exactly where a standing-room-only crowd was packed in to see the second of three performances of local poet Rachael Katz’s original play, Undark. In the brief program notes, Katz describes the performance as “vignettes that explore the catastrophe looming behind every great act of affection and the scientific imagination.” The scenes are loosely connected by themes of love, decay, and teeth. Teeth, those that tear food, comb hair or create tones in a music box, were invoked throughout Undark’s five short scenes, each using a large backlit projection screen as both prop and narrative assistant.

The bardic narrator, David McNamara, interrupts a dentist’s waiting room scene to declare, “Each time a piece of floss passes between any of our two teeth, the echo takes form in a shimmering cantata that resounds from the deepest sea caves on the planet up to the surface. There, we see it as the sun fractured into points of choppy water; we see it as bent light, barbecue embers, transformers along the highway, Formica, reflectors. In this way, it is possible to live longer and see more.” McNamara’s role in the play is often to shoulder Katz’s most poetic weight, which he managed with an understated but effective delivery.

Likewise, in the first scene the narrator presents to us the term Piezoececricity to describe a connection we might make with something we love: to fall so hard into one another we dissolve into glitter. We see Marianne, played by poet Cheryl Quimba, as a silhouette behind a fictional “Curie Point” before a waterfall, where she refuses to have her picture taken. She states, “Photographs…won’t show how wild we are. The camera will make us stiff and lifeless,” as she steps out of the shadows and into the reality before the screen. Everywhere we go, it’s easy to spot someone looking down into their screen. What are they looking for?

Undark’s most visually arresting scene, Radium Girls in a Musicbox, features three starkly contrasting personalities–another recurrent theme–in a toxic industrial setting, constructing music boxes. The three women are chatting about romance, barely recognizing each other as much as indulging in their own fantasies. One is in love, one open to love, and the third too practical to consider it. Behind them is a boss in a hazmat suit, capable of horrific sounds when in motion, holding a stark utility light. For a brief moment, the women’s images are copied in procession behind them, creating the illusion of a full-on sweatshop, with similar mindless conversations happening everywhere.

Undark is not all despair, though; several of the actors were able to lend comic portraits of their characters’ flawed humanity into the narratives. One character mishears another’s talk of getting right with god as wanting to become a lightning rod. They miscommunicate, just as we do.

The thematic layering was thick, but never overwhelming. And Katz was almost always able to wrest a poignant line from the weeds that kept the emotional drive centered somewhere familiar and distilled from reality. And the effect was memorable. “What will be left of us tomorrow?” the narrator asks in the fourth scene, trying to communicate with the silent but illuminated Madame Firefly laying in his bed. “No lightening. None. And yet, I search for her while she sleeps. Half-dreaming, I don’t know she’s left me. I reach over and find her there in the bedclothes. I touch her, and she is breathing and the room is breathing, and we’re alive. We’re underwater, but we’re alive.”