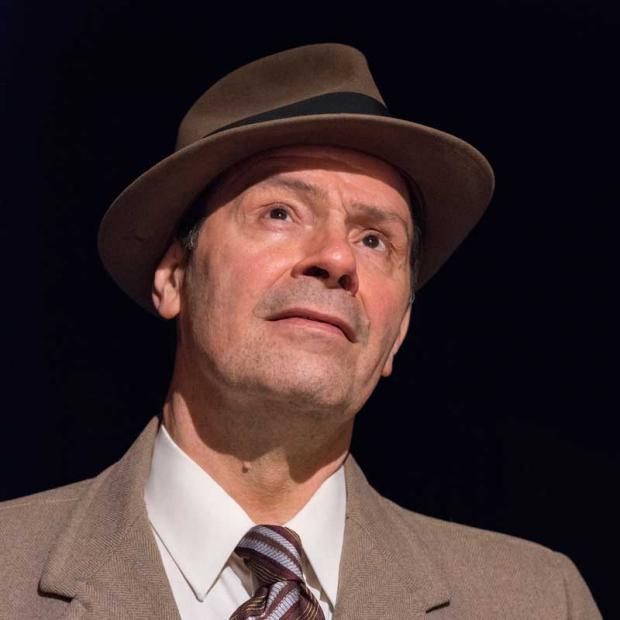 John Fredo as Willie Loman in Irish Classical Theatre's production of "Death of a Salesman"
by
George Sax
/ Nov. 19, 2014 12am EST

There are two major thematic currents working their way through Arthur Miller’s landmark mid-twentieth-century play Death of a Salesman, the playwright’s most famous work. It works on at least two levels, or, perhaps comes at us from two directions.  There are moments and scenes in which these two dynamics seem to coexist or interact awkwardly. The Irish Classical Theatre Company’s generally admirable current production of the play can feel as if it’s reflecting this uneasy balance.

Miller’s play depicts one exhausting, increasingly unsettling day in the life of the embattled, haunted protagonist, Willy Loman (John Fredo) and his family.  The roughly 24-hour span arrives at a searing climax that’s been hinted at for much of the two acts. Trouble seems to follow, to dog Willy from the play’s very opening. He comes home to Brooklyn, bone-weary and heavy-spirited, lugging his heavy sample cases. As he explains to his wife Linda (Ellen Horst), he couldn’t’ make it to appointments in Boston, barely getting beyond Yonkers before he found himself almost driving off the road, his mind wandering dangerously. This condition besets him repeatedly through the play.

Willy is 63, and he’s been a drummer for almost 40 years, but he’s just about reached the end of his thread. Willy’s beat, in more than one sense.

As Linda hastens to comfort and reassure her troubled spouse, he’s confronted with another stressful surprise: His two adult sons, Biff and Happy (Paschal Frisina III, Adam Rath) are asleep in their old bedroom. Biff, the elder, has been away for most of the last 15 years, and his parents haven’t heard from him in a long time, as he worked as a farm and ranch hand in Texas.  Biff was Willy’s golden boy, a star high school athlete and a student leader whose shining promise, along with a university scholarship, has been lost.  Why remains a mystery to Linda and Willy. What remains between father and son are resentment and recrimination. Biff obliquely indicates to his mother that he knows something disturbing about Willy.  Meanwhile, she has elicited a promise from him to ask his boss for a less taxing job in the New York office.

Salesman makes its conflict-ridden, time-shifting way inexorably toward a devastating resolution.  Willy remains at or near the center of this twenty-four hour journey.  His character and life must be the key to the play’s meaning.  But this has been contested ground since it opened sixty-six years ago.  With a writer as politically out front as Miller, it’s no surprise that critics on the left, right and center have contended over that elusive meaning.

Is the play about the universal plight of the little man, worn, or ground, down by the system, as Miller seemed to believe?  Is Willy a tragic figure?  Certainly not in a classic sense.  Willy hasn’t challenged that system; he’s believed in it.  His Dale Carnegie-esque faith in winning success through cultivating a “well-liked” persona has left him stranded and economically strapped.  The “American Dream” in this “greatest” country has let him down, but he can’t see this.  Nor does he understand that his aggressive attempts to inculcate his faith in his sons has indirectly lead to his estrangement from one, and helped make the other a glad-handing maneuverer, and a philandering bum, as his angry mother calls Happy.

Yet this salesman’s plight also has its origins in his personal weaknesses.  The illustrious literary critic Harold Bloom has called the play “a tragedy of familial love,” but this goes too far for me.  Still the parts don’t always fit together tightly, and this may be discernible in the Irish Classical’s production.  Fredo’s Willy captures the poignant bewilderment, anger and fear, but he’s sometimes less successful at communicating Willy’s by-the-book charm offensives.  Sometimes Fredo seems to be too energetic for Willy’s stressful, addled mind frame.  But there’s no gainsaying the actor’s great delivery of his character’s personally and socially false consciousness, of the fact that he doesn’t know who he really is, as Biff observes very near the end.

Horst’s sensitive, piercing portrayal of Linda is the finest of the cast’s very good ones.  In a real way, Linda is the play’s heroic and tragic character and Horst is very credibly besieged and courageous.  Her reading of the famous little “attention must be paid” speech about Willy is disturbingly hard to forget.  Frisina and Rath play very well together and individually, the contrasts and similarities between the brothers coming through.  Gerry Maher, as the mildly acerbic and perhaps cynical neighbor and benefactor of the Lomans, is smoothly, perceptively a counterpoint to Willy’s delusional mindset.

ICTC Associate Director Greg Natale’s direction is largely, if not consistently successful. His efforts to manage the play’s occasional unwieldiness are complicated by the company’s theatre-in-the-round playing space, which is less than ideally suited to Miller’s shifting time frames and his overlapping nearly simultaneous actions in some scenes.  The playing area sometimes seems too cramped and some of the staging and set decoration are cumbersome and distracting. But he’s managed the cast’s intimate encounters and interactions skillfully.  This production conveys the often raw, disturbing power of Miller’s celebrated play.