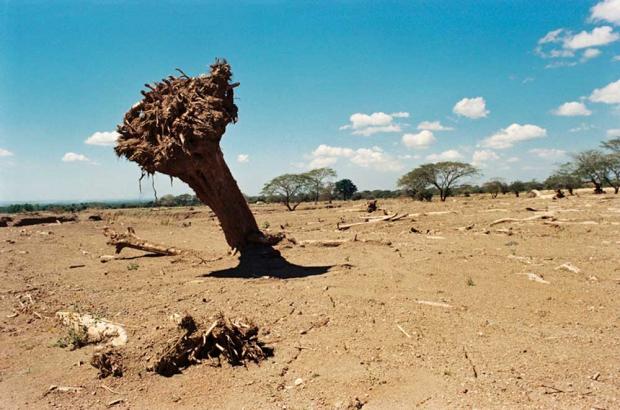 Langelle says in an opening statement: “I eschew the concept of objectivity; photojournalism should present truth. Great journalists like John Reed and photojournalists like Robert Capa told the truth, and did not worry about being ‘objective.’ The trend toward ‘objective’ journalism…where the truth must be counterbalanced by untruth, has no place in a just society, especially when corporate propaganda already dominates so much of the media.”

Photo locales range from the Arctic to Africa, from Bonn to Bali. The subject matter is environmental devastation due to traditional energy sourcing and use policies and practices, and popular protests against the corporate and governmental power structures intent on continuing business as usual, environment be damned, populations be damned.

These are outspoken protests, in ways you don’t usually get a sense of on the evening news videos. Marchers at the UN Climate Conference in Copenhagen in 2009 carrying a large banner featuring graphics of some suit-and-briefcase business and banker types, with the slogan in huge letters: “They Don’t Give a Fuck about Our Planet.”

Another photo shows a man in African garb who holds a poster displaying the face of a child and the slogan: “Climate Change Kills Me.”

The “Copenhagen Accord,” developed at the 2009 conference, mainly by the power nations, set a target limit on increase in temperatures worldwide of two degrees Celsius. African delegates to the conference, excluded from decision-making on the accord, responded with a protest march, while chanting: “Two degrees is suicide.” A spokesman for the Pan-African Climate Justice Alliance averred that two degrees Celsius worldwide would mean 3.5 degrees in Africa (or more than six degrees Fahrenheit), which he said would result in “death to millions of Africans.”

Another photo, from the Durban, South Africa, UN Climate Change Convention in 2011, shows a UN official addressing protesters—perhaps chastising the audacity of their questioning the wisdom and good will of the convention heavyweights—while a woman identified in the caption as a local activist looks on with something between dismay and horror. (The picture is reminiscent of the famous Weegee photo of the two rich old biddies, dripping in ermines and pearls, and the bag lady on the sidelines, hissing righteous hatred of them and all they represent.)

A series of photos feature environmental ravages due to extreme weather events and prior environmental management malpractice. One startling picture is of a large tree, uprooted and stuck upside down in a vast mud field in Nicaragua after a crater lake collapsed during a hurricane in 1998, causing a mudslide that buried whole villages, killing upwards of 3,000 people, and leaving another 5,000 homeless. Previous deforestation of land for coffee production was a contributing factor to the crater lake collapse.

Other photos are of cleanup work in Vermont after Hurricane Irene. One is of desiccated corn husks still on the stalks during a drought in Missouri in 2012.

A theme is the folly of false solutions to the climate change problem, from the shell game of carbon trading to the production and use of biofuels, being of dubious economic benefit in the first place, but also a threat to biodiversity, and, in third-world countries, responsible for displacement of native populations to give over ancestral lands for cultivation of biofuel crops. There are “thousands of solutions” to the climate change problem, but they are all “small-scale and community-based.” Several photos touch on the work of La Via Campesina, an international coalition of individuals and organizations promoting family farms and sustainable agriculture, and various other organizations promoting peasants’ rights and campaigns to halt violence against women.

There is a series on Cree and other native peoples’ opposition to Hydro-Quebec plans in the 1990s to expand electrical energy production facilities—more dams, more displacements—on native peoples’ lands. This protest effort worked, at least for the time being. The Hydro-Quebec plans have been put on hold. A Cree spokesman is quoted in a caption: “Saving the environment is as important as saving one’s life. The land is our life.”

Somewhere around here, in line with the official media model, you look for some industry shill or right-wing think tanker to come in to claim it’s all a hoax, this climate change and global warming stuff, and in fact the scientists are in disagreement—not getting into the 97 percent versus three percent statistic, or hard evidence versus dogma—so we can’t do anything yet. Meanwhile, just keep extracting fossil fuels. And hold up on the solar and wind ideas, and the rather burdensome—and so rather un-American—idea of smaller individual footprints.

The Orin Langelle exhibit stays up through December 19.