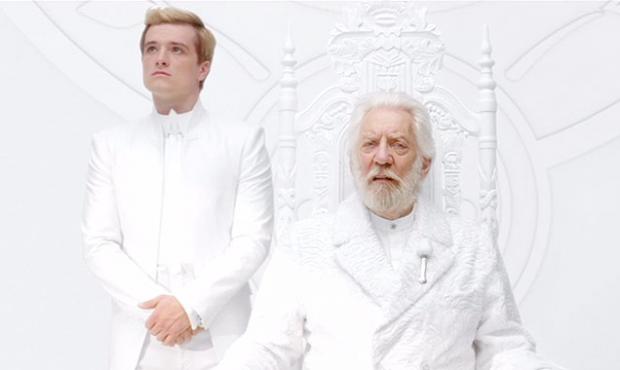 THE HUNGER GAMES: MOCKINGJAY PART 1
Multiplexes are cramming this teen-oriented sequel onto so many screens that there’s no room for anything else this week, making it a good time to catch up on movies you missed. Starring a bunch of good actors who hopefully got fat paychecks from it, including Philip Seymour Hoffman for the last time ever. Aurora, Flix, Hamburg Palace, Lockport Palace, Maple Ridge, New Angola, Regal Elmwood, Regal Niagara Falls, Regal Quaker, Regal Transit, Regal Walden Galleria

FROM UP ON POPPY HILL (Japan, 2011)
Retired from the arduous task of his hand-animated films, Hayao Miyazaki contributed to the screenplay for this feature by his son Goro, a realistic story about boys in 1964 Yokohama as the city prepares for the 1964 Olympics, an event it is hopes will rouse the country from the aftermath of World War II. Sat and Sun 11:30am. North Park Theatre, 1428 Hertel Ave (836-7411) northparktheatre.org

INSOMNIA (Norway, 1997)
The original version of a movie whose 2002 remake (starring Al Pacino and Robin Williams) you may be more familiar with. At the height of the night-less Scandinavian summer, a detective becomes caught in a cat and mouse game with the killer he is investigating. Starring Stellan Skarsgård and Sverre Anker Ousdal. Directed by Erik Skjoldbjaerg. Presented by the Buffalo Film Seminars. Amherst Theatre, 3500 Main St. (834-7655) dipsontheatres.com

THE TROUBLE WITH HARRY (1955)
A small Vermont town is thrown into turmoil when a corpse appears and everyone has a different interpretation of what happened to him—and what needs to be done with the body. One of Alfred Hitchcock’s few ventures into overt comedy (1941’s Mr. & Mrs. Smith is the other) isn’t a fan favorite, but it’s a low-key charmer that fits in well with his post-war oeuvre. Starring John Forsythe, Edmund Gwenn, Shirley MacLaine (her debut), Mildred Natwick, Mildred Dunnock, and a pre-Beaver Jerry Mathers. Sat and Sun, 7:30pm. The Screening Room, Northtown Plaza in Century Mall, 3131 Sheridan Drive, Amherst (837-0376) screeningroom.net

BIRDMAN
Too much and not enough. Alejandro Gonzalez Iñárritu’s “meta-movie” stars Michael Keaton as Riggan Thomson, a once famous actor whose career took a downturn after he stopped playing the superhero character he was famed for. In need of a comeback vehicle and artistic validation, Thomson mounts a Broadway play as a vehicle for himself, a troubled production that forms the basis of this film’s increasingly wild proceedings. It’s certainly challenging, dynamic and technically fluid. But it’s also erratic, lurching from scenes of banal domestic confrontation and confession to deliberate comic excess to surreal flights. In the end it’s too much structural complexity for one film to handle. Co-starring Zach Galifianakis, Edward Norton, Andrea Riseborough. (GS) Amherst, Eastern Hills

DUMB AND DUMBER TO
A few good laughs at the end aren’t worth the agonizingly dull 100 minutes preceding them in this sequel to a hit from 20 years ago. Creators the Farrelly Brothers (There’s Something About Mary) seem to have lost the light touch they used to have with bad taste; combined with the noticeable aging of stars Jim Carrey and Jeff Daniels, it makes for a desperately unfunny comedy. With Kathleen Turner, Rob Riggle, and Laurie Holden. (MF)  Flix, Maple Ridge, Regal Elmwood, Regal Niagara Falls, Regal Transit, Regal Walden Galleria

FURY
War has seldom been portrayed more hellishly than in writer-director David Ayer’s (Training Day) film that follows an American tank crew in the very last days of the Second World War’s European Theatre operations. Brad Pitt plays the sergeant leading this crew as a quasi-mythic figure, a profane but all-American warrior-saint. His philosophy is presented as he trains a green kid (Logan Lerman in a sensitive, persuasive performance) in the cynicism and savagery that are natural consequences of war. The theme of brothers-in-arms fades under all the juvenile pulp-fiction fantasy, and by the last overblown, drawn-out, catastrophic battle scene, it has become impossible to take seriously. With Shia LaBeouf, Michael Peña and Jason Isaacs. (GS)  Regal Elmwood, Regal Niagara Falls, Regal Transit, Regal Walden Galleria

THE JUDGE
As you might expect in a dramatic offering from auteur David Dobkin, best known for Vince Vaughn vehicles like Fred Claus and The Wedding Crashers, this is insistent hokum, grabbing your lapels to get your involvement and sympathy. Robert Downey Jr. gives a technically impressive but emotionally uninvolved performance as a cynical big city trial attorney defending his cranky father (Robert Duvall), a small town judge accused of vehicular homicide. Duvall still has his acting chops, as he sometimes manages to evoke a dignity and sympathy that the movie doesn’t really deserve. Between the overheated, dysfunctional family complications and the courthouse collisions, the movie has a certain crude power, but 140 minutes of it is mostly exhausting. With Vera Farmiga, Billy Bob Thornton, Vincent D’Onofrio, Dax Shepard and Grace Zabriskie. (GS)   Four Seasons, Regal Transit

NIGHTCRAWLER
It could be called Skincrawler for Jake Gyllenhaal’s viscerally creepy performance as sociopath Lou Bloom, pitched somewhere between Travis Bickle and Rupert Pupkin. (A younger Robert DeNiro would clearly have been the first choice for the role.) An LA bottom feeder looking for a path to success, Bloom finds it selling video footage of crime and accident scenes to a television station where the overnight news director (Rene Russo) is desperate to save her career. Writer/director Dan Gilroy keeps his examination sharply focused, shooting mostly at night on streets that crackle with danger and excitement. Bloom’s recitations of speeches learned from internet self-improvement classes add a satirical edge to story that is no less unsettling for being somewhat obvious. With Riz Ahmed and Bill Paxton. (MF)  Maple Ridge, Regal Elmwood, Regal Transit, Regal Walden Galleria

ROSEWATER
Jon Stewart’s directorial debut is a respectful, solidly crafted drama about Maziar Bahari, the Iranian-Canadian journalist who was jailed in Iran after reporting on that country’s 2009 presidential election. He was charged with spying, and part of the evidence used against him was an appearance on The Daily Show. Perhaps sensitive to possible charges of glibness, Stewart avoids any use of humor, even when it would be useful in portraying a ridiculous if tragic situation. The result is adequate but rather bland. Starring Gael García Bernal and Kim Bodnia. (MF) Eastern Hills, North Park

ST. VINCENT
Bill Murray may shout to the heavens that he doesn’t want an Academy Award, but it’s hard to see this mawkish comedy-drama as anything other than a calculated shot at an Oscar. His performance is fine enough, but there’s only so much you can expect from a story about a curmudgeon saved from a life of whoring and gambling by his friendship with a lonely boy who moves in next door with his harried mother (Melissa McCarthy). Plausibility is never the film’s strong point, but the contrived finale is so shameless that it looks like an old SNL parody. Written and directed by Theodore Melfi. With Naomi Watts, Chris O’Dowd and Terrence Howard. (MF)   Amherst, Flix

WHIPLASH
Inspired by his own experiences at a musical conservatory, writer-director Damien Chazelle’s film about an obsessed drum student and his even more obsessive teacher takes its cues less from movies about the arts or academics than the military, starting in An Officer and a Gentleman territory before plunging unexpectedly toward Full Metal Jacket. An excellent performance by Miles Teller as the student is overshadowed by J. K. Simmons in the role of a lifetime as the teacher who believes in pushing students past what they think their limits are. The finale arguably undercuts everything the rest of the movie stands for, but it’s so well executed it’s hard to complain. (MF)  Amherst, Eastern Hills