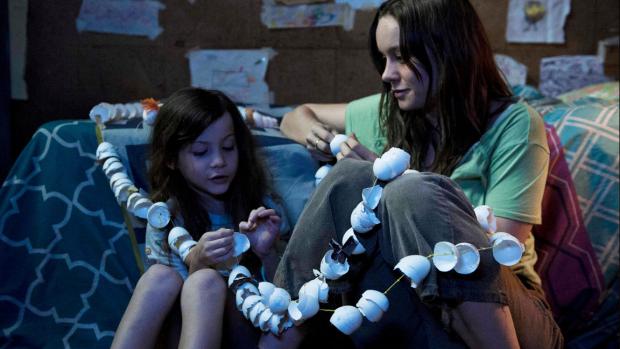 In the first five to 10 minutes of Lenny Abrahamson’s Room, as we watch some seemingly mundane, yet increasingly odd domestic activities of a young woman and a small child, a sense of unease develops. The woman is the boy’s mother, it very soon transpires as they cook, clean, wash-up, and bake a little birthday cake. It’s for the boy, Jack (Jacob Tremblay), whose fifth birthday it is. He complains there are no candles. His mother, Joy (Brie Larson), tells him they have none because “he” has brought them necessities, not frivolous items like candles. But, she assures him, this doesn’t make it less of a birthday cake.

All this takes place in a single small space. It’s soon obvious that Jack and Joy have been confined to this one room, perhaps 10 by 10 feet. “He” is old Nick, their jailor (Sean Bridgers), and the one who brings them supplies. He shows up regularly for sex with Joy. He’s also Jack’s father, of course. Seven years ago he captured the teenaged Joy, raped her, and confined her to this little room. When he comes to sleep with Joy, Jack is put to bed in a slat-doored wardrobe, but he can see and hear much of what’s happening, even if uncomprehendingly.

There’s a lot Jack doesn’t comprehend, including the fact of his imprisonment and the existence of a world outside. Room is what he has named their prison cell; Joy has assiduously inculcated in him that this space is their world and reality is what’s there. This is Room’s difficult but compelling conceit. A crucial part of the movie’s impressive achievement is to render this situation persuasive. We increasingly experience it from the little boy’s perspective. There’s a TV in the room, but Jack thinks its images are a shadow world of fantasy. (“Dogs and squirrels are TV,” i.e., imaginary.)

Room was adapted by Irish writer Emma Donoghue from her own novel. It’s easier to pull off this kind of thing in literature than with the objectifying glare of movies, but Room somewhat improbably succeeds in conveying the receptive suggestibility of a small child and his construction of a little world.

The tension in this imprisonment setting rises until it reaches a climactic mid-movie pitch and the film begins to resemble a more conventional suspenser. It then upends all that’s happened and seems to descend toward a flatter interpersonal drama. Some viewers may find what follows a bit of a let down. A reviewer is confronted with some difficulty in discussing this without revealing what should be experienced. At least this reviewer does.

But if Room’s second half lacks the dramatic urgency of the first, it never really loses its focus on Jack’s odyssey from one world to another. A lot of the skill that’s in evidence in portraying that journey is obviously Abrahamson and Donoghue’s, but what they’ve done would not have been possible without the acutely sensitive and sometimes riveting performances of Larson and young Tremblay. The kid is utterly convincing and uncannily fascinating.

Room is largely about Jack’s almost surreally impacted changing consciousness. It’s also about the changing primal bond of the mother and child. Room slowly builds toward a resolution that’s somehow both satisfying and a little jarring.