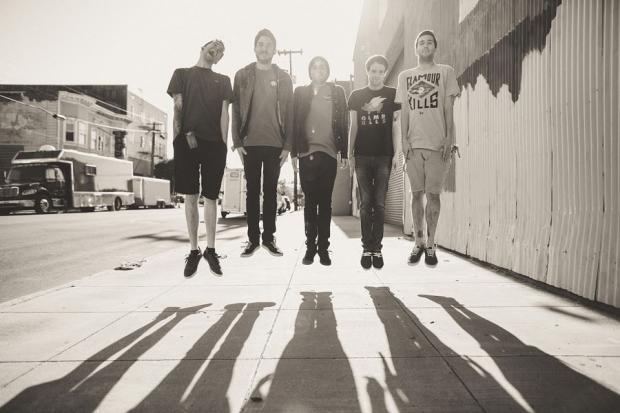 Pop-punk is a genre that has always come in different stages since its earliest days in the 1990s. We saw rises back then, then again in the mid 2000’s, and now a new wave of pop-punk is rising. These young bands aren’t messing around, as the new breed of pop-punk is punchier, gutsier, and more emotional than ever. These kids know how to cut to the core, and no one does it better than Real Friends. The five-piece out of Illinois are at the top of the class of this new movement, and with a headlining show approaching at The Waiting Room on Tuesday, November 25, we were lucky enough to talk with songwriter and bassist Kyle Fasel about how the band’s songs come together and how he thinks they make an impact.

Public: I think of lot of people out there would put both your band and Neck Deep as two bands who are at the forefront of the new pop punk movement that seems to be emerging now. How did your tour with Neck Deep come to be, and how does it feel for you guys to play together every night?

Kyle Fasel: We’ve toured with them before actually, so it’s cool going into the tour knowing them. Both bands share the same fans so I think it’s really rewarding for the fans and for us to have both our bands play together.

P: In terms of your songwriting, Real Friends is a band that resonates deeply with so many out there, and I think that’s really thanks to your stream of consciousness lyrical style. Did this style of writing develop naturally from the start, or did it kind of evolve over time?

KF: I think it was something that just kind of happened. One thing we built our whole band on was being honest, and that goes hand in hand with the lyrical content. I don’t think that songwriting should have to be this big, well thought out thing.

P: In a sense there’s been a great change in pop punk since the early 2000’s. Lyrics are more focused on cutting to the core of emotion with straightforward language rather than using wordplay and anecdotes to describe a lot of the same issues. Do you feel this way as well?

KF: We’re a whole different generation, so we group up with a whole different set of experiences. It comes with the evolution of the whole style. When a genre makes a comeback, things need to change. 10 years ago it was much more about the hookiness and catchiness. Bands are now drawing from many different genres, which has inspired more lyrical honesty.

P: Pop punk is a genre of music that appeals, mostly, or only to a younger generation. Do you think this is a way of thinking that will always stay around, or do you think that it doesn’t have to be that way?

KF: I don’t think it has to be that way. I never want to classify our music for a specific age group, but a lot of people in that generation listen to our music because they’re going through the same things that we’re writing and singing about. Music is something that kids now really invest in, which is really cool to see. It has a lot to do with what kids go through in this day and age.

P: There are a lot of young bands emerging right now that will obviously be following the example of bands like yours, as you guys have become pretty successful over the past few years. What do you think up and coming pop punk artists need in their toolbox to succeed?

KF: Only tour when you feel like you need to. We waited a while, and there’s no point in playing in front of nobody. In those situations, everybody loses money. Things like paying dues don’t really matter. If this was back in the day, you would tour a ton, but now it’s a completely different game. Get a following through the internet. You draw people in with your music first, then you go on tour. And really perfect your songs, and get the quality up to the point where you enjoy it. Make sure every song is good and worth listening to.