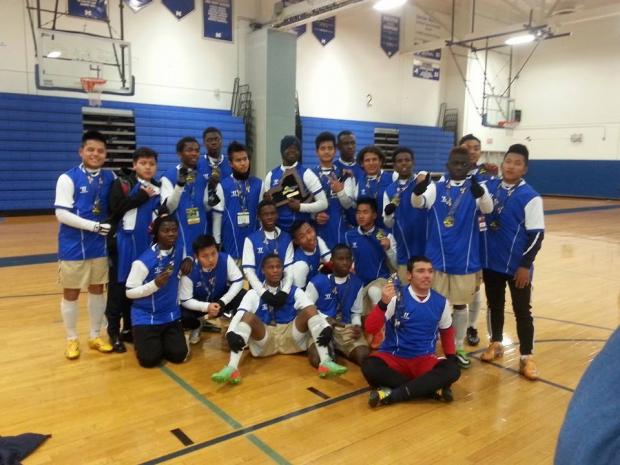 In startling contrast to the usual Sunday afternoon affairs from the Buffalo world of sport, this event was uplifting and tremendously exciting.

The International-Prep Presidents conquered the valiant Mount Academy Eagles Sunday afternoon in the High School Class D Boys Final held in Middleton, NY, home of the Middleton Middies. The I-Prep soccer team, comprised entirely of ESL students stemming from immigrant families in Buffalo, became champions off the foot of Pa Lu halfway through a sudden death overtime. Pa Lu, a whirling dervish of a striker that gave the Eagles fits all afternoon, had already scored the go-ahead goal off his head with 10 minutes remaining in the contest.

Mount Academy, a Christian school located in the Hudson Valley, tied the game for a second time with only five minutes remaining with a set piece off of a free kick that found President defenders napping.

The extra frame found the Eagles coming out in waves into the I-Prep zone, a reversal of most of the preceding action in regulation. But on a counter, Pa Lu streaked ahead of the line to field a brilliant pass from a teammate and flicked the ball towards the corner ahead of the charging goalkeeper.

After scoring, sophomore Pa Lu ran back towards his teammates who all converged in a pile on the far sideline. The team, coached by I-Prep staff Tony Alessi, Mike Massechia, and Abdi Haji-Noor, last reached the state finals in 2009.

I-Prep advanced after their semifinal game against Chazy on Saturday went to penalty kicks. I-Prep was in 3-1 hole in a best-of-five format, and wound up winning in the 8th round.

If you’re curious as to how special this team is, defenseman Emmanuel Kombi keeps an excellent Facebook page for the team. And if someone can write to aaron@dailypublic.com to fill in the names on the caption for the lead photo, we would certainly do that.

Thanks to I-Prep staff Mary Clare Hayes and Kimberly Wolf for assistance.