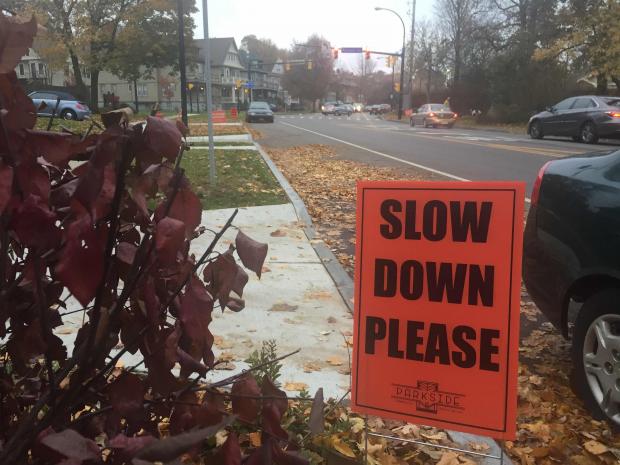 A lawn sign at the "Parkside Curve," long a dangerous stretch of road for motorists, pedestrians, and lawns.
by
Aaron Lowinger
/ Nov. 15, 2017 1am EST

Backing up to 2014, Buffalo police commissioner Derenda told the Buffalo News, “Our Strike Force officers are conducting daily roadblocks at multiple locations and surprising the criminal element. Because of that people are now less likely to carry guns knowing that they may be stopped at a safety checkpoint.”

In recent months, however, city officials including the mayor and the police spokesperson have been careful to refer to the checkpoints as a traffic safety measure.

Yet residents of a large, affluent, and mostly white North Buffalo neighborhood that has been working with the city for years to address traffic safety issues told The Public that the implementation of checkpoints in Parkside has never come up.

The streets of Parkside handle a huge amount of traffic daily, funneling drivers from the densely populated neighborhoods of North Buffalo, Kenmore, southern Tonawanda, and southwest Amherst down Main Street to the downtown core. Parkside also is home to an array of schools, businesses, two colleges, and Buffalo’s busiest park.

To this end, the Parkside Community Association has a Traffic Committee that reports back to its members. Earlier this year, a newsletter put out by the PCA stated that the association has “been requesting additional police enforcement for traffic violations in Parkside.” Complaining of speeding and other unsafe driving, the association asked police to be more active in writing tickets. “We have been advised that our D District Police Officers have been enforcing in the neighborhood,” the newsletter states. “We have been advised they have written more than 150 tickets in the last 3 weeks, and plan to continue this enforcement.”

Historically, Parkside residents have been some of the city’s loudest proponents of traffic safety and traffic calming measures. Several of the city’s test speed humps were installed on problem blocks in the neighborhood, and a 2011 Buffalo News report on the “Parkside Curve” at Parkside and Florence describes the problem of speeding drivers causing multiple accidents every year, sometimes jumping the curb and onto lawns, and that the fight for safety on Parkside’s street was already 40 years old.

In an email to PCA director Amber Small, we asked simply if checkpoints were ever discussed or seen in Parkside to deal with the issue. Small simply wrote back that they “have not been involved in any discussions regarding that form of policing.”

Buffalo police have been criticized not only for their use of potentially unconstitutional checkpoints, but for their apparently discriminatory implementation in neighborhoods where minorities are concentrated. After Common Council President Darius Pridgen said in May that he would seek information on checkpoint locations to check against this suspicion raised by residents, the BPD released limited checkpoint data from the summer months, rebranding the forms used to record data as a “Traffic Safety Checkpoint Tally Sheet.” In comments about checkpoints to media in recent months, both Lt. Jeffrey Rinaldo and Mayor Byron Brown said the checkpoints are for traffic safety.

In the meantime, legal advocacy groups have sued the Buffalo Police Department for its failure to disclose checkpoint data going back several years. The Western New York Law Center and the National Center for Law and Economic Justice continue to investigate the BPD’s “use of vehicle checkpoints in Buffalo’s low-income communities of color,” according to the NCLEJ’s Claudia Wilner, who has helped establish a hotline (646-680-8906 or email BuffaloCheckpoints@nclej.org) to gather information from Buffalonians on their experiences with checkpoints.

Data gathered by a recently completed two-year research study by the University at Buffalo and Cornell law schools show the uncertain effect of checkpoints on traffic safety. There has been an uptick in violations not directly related to traffic safety (e.g. parking summonses and tinted windows) and numbert of vehicles towed, and an overall decrease in DWI arrests and red-light violations. “The BPD’s checkpoint program had little effect on safety-related violations or traffic safety,” the study concludes. “In fact—there were 224 more accidents in Buffalo in the two years after the BPD began its daily checkpoint program.”

That study, spearheaded by the former UB law professor Anjana Malhotra, established the basis of a formal complaint against the Buffalo Police filed with the state attorney general on behalf of Black Lives Matter.