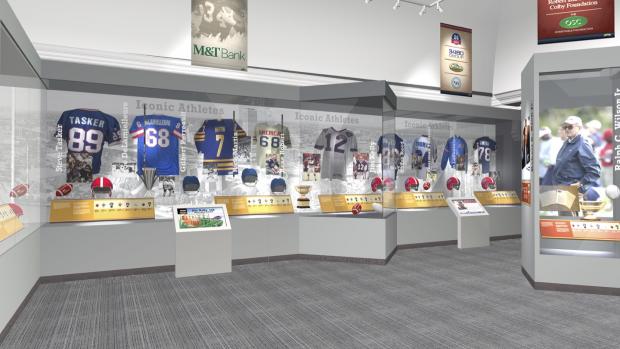 The football soared straight at the goalpost. You could see it hooking slightly left, making the Buffalo Bills Super Bowl champions.

Scott Norwood’s 47-yard field-goal attempt, known to every Bills fan—from those who attended the first game at The Rockpile in 1960 to kids who were not even born in 1991—as Wide Right, remains the single most indelible moment in the area’s sporting history.

Unless, of course, you’re more of a Sabres fan. Then you see Brett Hull’s skate in the crease as he ended the 1999 Stanley Cup Finals by slipping the puck past Dominik Hasek when you close your eyes. No Goal, you say.

Except it was, at least to the officiating crew and the NHL.

That Wide Right and No Goal stand as the two most significant events in more than a century of professional sports in Buffalo seems to fit, given the regional inferiority complex that stemmed from decades of industry and people fleeing the area.

It also stands as a testament to local fans, who continue to support both teams, starting each season with hope, even though it tends to get snuffed pretty quickly.

The Bills won American Football League championships in 1964 and 1965, the last two seasons before the inaugural Super Bowl. Most of America and its media considered the AFL, which would merge into the National Football League in 1970, to be a step below its established rival.

Other than that, the Bills, Sabres, and long-departed Braves have played a combined 120 seasons without a Stanley Cup, Lombardi Trophy or Walter A. Brown Trophy (as the Larry O’Brien Trophy was known during Buffalo’s National Basketball Association lifetime) to show for it.

That blend of optimism and fatalism is unique to the area. (San Diego has endured similar multi-sport futility, but it’s still San Diego, for God’s sake.) It’s also a theme I had in mind while helping put together Icons: The Makers and Moments of Buffalo Sports, which opens this week at the Buffalo History Museum.

It’s not all heartbreak. The Bills’ comeback victory over Houston in a January 3, 1993 playoff game stands, to me, at least, as the single greatest positive in Buffalo’s sports history.

The rush of seeing backup quarterback Frank Reich, filling in for Jim Kelly, lead the Bills all the way back from 32 points down in the second half was something every fan hopes to experience.  But only Buffalo loyalists got to see it live. The ones who stayed in the stadium or saw the blacked-out game on a pirated telecast, that is.

The exhibit is not meant to serve as a comprehensive history, but a look at the players, teams and events that created Buffalo’s identity as a sports town.

Wide Right and No Goal are prominently featured, but they are parts of a much larger story, which starts with the rise of professional spectator sports nationwide during the second half of the 19th century.

And though the Bills and Sabres command the most attention, other Buffalo professional teams like the Bandits, Blizzard and Stallions also get their share of play. So does professional boxing, which gave rise to hometown heroes like world champions Jimmy Slattery, Lou Scozza and Rocky Kansas in the 1920s and heavyweight contender Joe Mesi in the 2000s.

As he climbed the world rankings with a string of knockout wins, Mesi lived up to his promotional moniker, the Third Franchise, by drawing large, rowdy crowds at venues from the Niagara Falls Convention Center to the University at Buffalo’s Alumni Arena to HSBC Arena.

One night at the home of the Sabres, Mesi faced fellow rising contender DaVarryl Williamson in a scheduled 10-round bout telecast on HBO. Mesi’s opponents to that point consisted mostly of unknowns and a handful of faded former contenders. Williamson, though, was lanky and mobile, with a powerful right cross and considered Mesi’s biggest test to date.

The crowd at HSBC Arena that night was as loud as I experienced in my years making something approximating a living as a sports reporter. Williamson looked overwhelmed by the size and energy of Mesi’s following. As soon as the opening bell rang, he was exactly that.

Mesi swarmed him almost immediately, landing hooks and crosses to Williamson’s head and body. The intensity of his attack increased as the volume escalated. Ninety-seven seconds into the fight, it was over, with Williamson flat on his back, staring blankly at the ceiling lights as the referee waved the fight over without finishing his 10-count.

“Even when the Bills are bad or the Sabres struggle, the games still sell out,” Mesi told me while working on the exhibit. “They just want it so bad here. In my case, the people didn’t care if I was boxing, playing badminton or baseball. It was because I was from Tonawanda.”

Icons: Makers and Moments of Buffalo Sports opens Friday with Community Game Day, which is free and runs from 10 a.m. to 8 p.m. More information is available at www.buffalohistory.org.