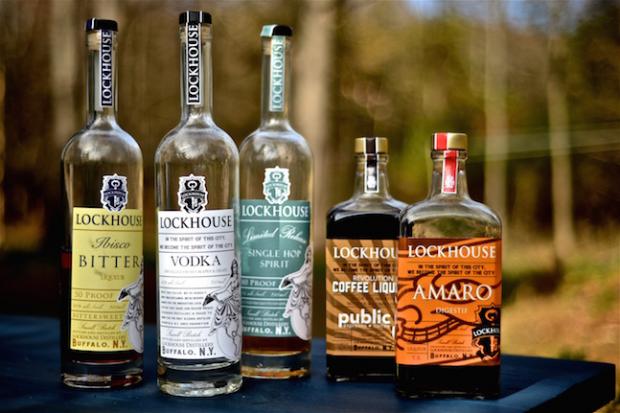 That Buffalo’s Lockhouse Distillery has won four prestigious awards for its vodka comes as no surprise. This is one of the smoothest, cleanest vodkas I’ve tasted. Triple distilling puts it in league with the best of Polish and Russian vodkas, and, using popular reference points, I would put it somewhere between top-shelf giants Belvedere and Grey Goose. What sets the Lockhouse vodka apart from more standard offerings is a distant floral note echoing down the middle followed by a nearly transparent finish. It’s the kind of easy-drinking vodka that could get you into trouble were you to, say, enter a shot session with an enthusiastic Russian. Fellow buzz-brains, you’ve been warned.

My tasting partner was Andy Baldwin, co-owner of Urban Cowboy Nashville, which houses an award-winning cocktail bar. Upon trying the Lockhouse vodka he said he could easily see this being his house vodka. Lockhouse, are you ready for that kind of expansion?

Chances are, no, they’re not. Small, local distilleries using regionally sourced ingredients and hand-bottling their booze means forgoing major market share. Our bottle was hand-labeled as 122 out of just 229, a familiar designation these days, but in the case of a truly small distillery’s offerings—as opposed to, say, Jack Daniel’s impossibly ubiquitous “limited editions”—Lockhouse’s numbers are a sincere representation of how much booze they actually make at a time. Of course, that scarcity is half the fun; you get something truly unique with a regional story and flavor.

Distilleries like Lockhouse are part of a broader craft-oriented movement in the US, a movement of passionate entrepreneurs intent on changing the way goods are made, distributed, and consumed. Their goals tend to be sustainability, high quality, and sheer sanity in the face of blazing-fast globalization. Lockhouse fits that description to a tee, and imbibers with an interest in supporting an alternative, regional economy should, I think, rush out and imbibe Lockwood’s spirits.

To get a sense of Lockhouse’s dedication to its region, consider that the vodka is made from grapes and grains sourced from the Niagara Wine Trail region, a short jaunt into Canada from Buffalo that reduces the carbon footprint of this beverage while assuring a regional flavor profile that will shift over the years, just as wine does. It’s a perfect example of how sustainable crafting adds up to a more enriching, higher quality product.

There are a lot of small distilleries out there making vodka, but precious few are making bitters, amari and (new to me) a Single Hop Spirit. Confession: I was skeptical. So many small distilleries absolutely nail one, maybe two, signature spirits, and then sort of toss off a host of second-tier offerings. Lockhouse’s current catalog, however, is like a greatest hits album. It’s all delicious.

I’m a huge Campari fan—Negronis, Boulevardiers, the occasional Quill—and Lockhouse’s Ibisco Bitter is a lovely substitute for Campari. Mellower than the Italian classic, rosewater dominates the Ibisco, followed by bitter citrus and a spicy finish. A finger of Ibisco over ice was vastly more enjoyable than Campari, which I almost never drink unmixed. We dreamed up a Lockhouse Vodka Tonic with a splash of Ibisco for a mellow, floral, and dangerously drinkable cocktail (again, you’ve been warned).

If Lockhouse’s Ibisco Bitter flavor profile occupies the Mediterranean coast, then their Single Hop Spirit occupies an alpine forest: pine sap, balsam, and tree bark make up the initial burst, followed by a woody warmth with spice. Mr. Baldwin thought it was not entirely unlike a high end Vermouth (Antiqua came to mind). Our second concoction was a Lockhouse Boulevardier, which was so nuanced that my brown-liquor-averse better-half actually dove right in after a sheepish sip. This Boulevardier was so good we gave up inventing drinks and just had a second round.

The Single Hop Spirit is crafted using a local brewery’s hops and New York State corn, thus bridging “the worlds of craft beer and craft spirits,” according to Lockhouse’s website. However, there was almost nothing beer-like about the Single Hop Spirit. Don’t expect anything remotely close to a Douple IPA, or some other hop-tacular beer; instead, consider approaching this unique spirit as a kind of vermouth meets whisky.

Lockhouse’s Amaro is aged on sassafras for a month, giving it a root beer essence that gently numbs the tip of your tongue. Gorgeous on its own, it was even better over a scoop of vanilla ice cream with a sprig of fresh mint. I had this on my own after the others had hit the hay, but I might have called this indulgence the Lockhouse Amaro Float.

Serve in a coffee mug.

Having literally gagged on coffee-flavored beers and liquors in the past, I was deeply suspicious of the Revolution Coffee Liqueur. To my surprise, this amaro-ish, desert-oriented spirit gets a heartfelt go-ahead from yours truly. You’ll be rewarded with caramel, coffee, and a bit of raisin with a cinnamon nip at the end. Like their vodka, this spirit also carries four prestigious awards, and I imagine it will continue to garner such accolades. To make a non-gag-inducing Coffee Liquor is an accomplishment in its own right, but to make one that’s simply delicious indicates some serious spirit crafting.

Picking up on the regional theme, the Revolution Coffee Liqueur is made in conjunction with Buffalo’s own public espresso + coffee, a small batch roaster and coffee shop central to Buffalo’s vibrantly revitalized local beverage scene. With a location in The Hotel Lafayette (which I remember as a scary-ass crackhouse back in the 1980s and early 1990s), these self-proclaimed coffee nerds make a perfect partner for Lockhouse in the movement to revitalize Buffalo.

I nominate the Lockhouse Amaro and the Revolution Coffee Liqueur as brilliant holiday gifts. As an expat, I can attest to how nice it is to have something from Buffalo to open and enjoy. If you’ve got an expat who likes a little nip, gift them a taste of the City of No Illusions—or just buy it for yourself. You’ll be delighted.