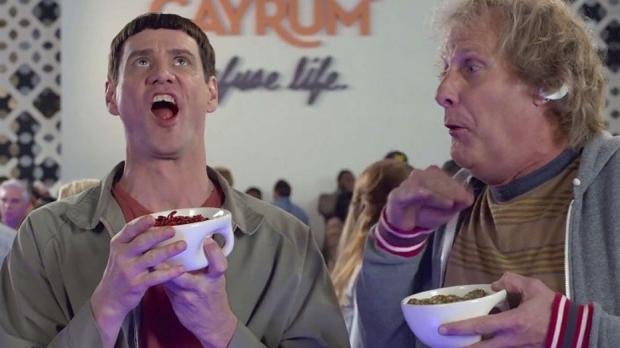 I laughed three times during Dumb and Dumber To, a sequel with a title apparently designed to make copy editors work harder. The first was at a gag involving Lloyd eating a hot dog, the kind of oddball schtick for which Jim Carrey has a singular genius. And of which there is very little in this movie. The other two came at the end of the film, and as they qualify as spoilers I won’t give them away. I will say that they weren’t big enough to justify the agonizingly dull 100-plus minutes that preceded them.

It will probably surprise no regular reader to say that I wasn’t a fan of the first Dumb and Dumber. I don’t actually remember much of it aside from what seemed like an endless scene of Jeff Daniels as Harry (I’m not sure which one he is, Dumb or Dumber) suffering from explosive diarrhea. But while it wasn’t to my own taste, I understood what it was that fans liked about the movie. And you won’t find much of it in this sequel, which reeks from top to bottom of desperation.

The question is, who was the most desperate party involved? Was it Carrey, whose box office standing needs a shot in the arm after a decade of good performances in worthwhile films (I Love You Phillip Morris, Eternal Sunshine of the Spotless Mind) mixed with wan family movies where he was reduced to a lesser special effect (Mr. Popper’s Penguins, A Christmas Carol)? Or was the project pushed by writer/directors the Farrelly Brothers, who have pretty much scraped their barrel of bad taste comedy to the very bottom? (I rather liked their last film, an affectionate update of The Three Stooges, but it wasn’t what you’d call a hit.)

An even more interesting backstage question would be, how the hell did Carrey and the Farrellys talk Jeff Daniels into doing this? He’s probably at a career high point with the popularity of The Newsroom, and HBO can’t be happy that the final season of their popular drama is appearing just as its star is prancing around here in a silly wig showing off entirely too much of his ass.

I would describe the plot, but can it possibly matter? If you’re keeping track it regurgitates the road trip setting of the first film with a tired subplot (trophy wife planning to kill her husband) that the Farrelly’s used in their Stooges reboot.

If you’re going to see this, it’s for the over the top bad taste jokes and gleefully juvenile behavior of Harry and Lloyd’s previous adventure. And I hate to tell you, but what there is of that here is tired and forced. Maybe the thought of an old woman in a nursing home getting—is there a tasteful way to say this?—fingered by Lloyd is funny to you. And maybe there’s a way if could be made funny. But the Farrellys and their four credited co-writers don’t know what it is.

Don’t want to take my word for it? Well, why should you? But I tell you this: I wasn’t the only person in the theater. And no one else was laughing, either.

Watch the Dumb and Dumber To trailer: