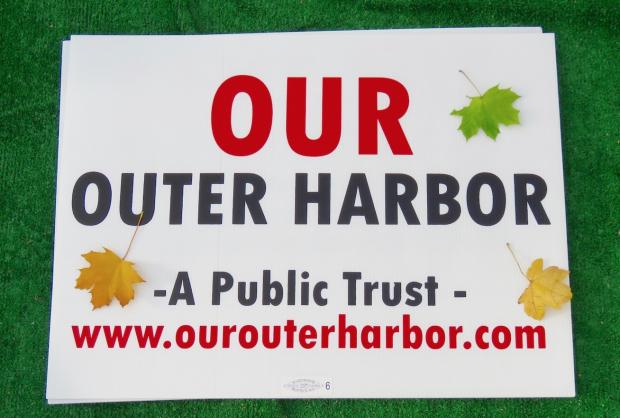 You may have seen those “Our Outer Harbor” and or the “Save the Bell Slip” lawn signs that have appeared around the city and region since late summer. A new coaltion created by a group called the Concerned Citizens for Buffalo’s Outer Harbor formed the Our Outer Harbor group in order to help ensure that the state agency charged with planning the Outer Harbor, the Erie Canal Harbor Development Corporation (ECHDC), embraces wide public engagement as it creates its plans to use and develop the Outer Harbor.  The group formed in response to its concerns that the state agency (ECHDC) often operates behind closed doors when making decisions and spending public money.

Two years ago ECHDC announced plans to build privatized condominiums at Wilkeson Pointe Park and along Fuhrman Blvd. These condos would surround Times Beach Nature Preserve.  This plan would negatively impact the nature preserve which is located as a gateway to the Niagara River Globally Significant Important Bird Area. Times Beach Nature Preserve is a really precious and fragile place at the nexus of Lake Erie and the Buffalo and Niagara Rivers. This is a critical location to protect and conserve wildlife and biodiversity and signfifican public funding has been invested to protect this site. It is also a significant public resource that allows all citizens to enjoy and learn about nature and conservation. It and the Outer Harbor are lynchpins of Great Lakes conservation and climate change issues. Citizens and outer harbor activists got pretty pissed off, held some signficnant rallies at the site and eventually ECHDC pushed the plans for the condos at these sites to the back burner.  We wrote about this smoke and mirrors effort to use public money to subsidize inappropriate private development by the ECHDC in January 2015. CLICK HERE

We have  known all along that the back burner for condo development at the Outer Harbor is still lit.  There is a private development community associated with state iniatives that is eager to get their hands on development opportunities -including public money associated with the Outer Harbor.  Much of the recent activity to promote activities on the Outer Harbor is part of a campaign to popularize the area so that people will support housing and other amenities. While the community in general does not oppose enjoyment on the Outer Harbor by citizens and visitors throughout the region, and do not opposed appropriate development including amenities, many including the Our Outer Harbor coalition, oppose the privatization of public lands and shorelines so that a few private condo owners can segrate this great resource from the rest of the population. The Our Outer Harbor coalition is concerned that ECHDC continues to operate behind closed doors. The Our Outer Harbor coalition is focused on ensuring that the public has the final say in how the Outer Harbor is developed, not the pay to play horsemen that continue to drive political decisionmaking in New York State and in the region. It is important to note that the ECHDC makes its public decisions at little publicized , more or less monthly meetings. It is also important to note that the public can attend these. Although the agenda is never published in advance, it is important to note that the next monthly meeting of the ECHDC is TOMORRO, Monday November 14. Important decisions are often made at these meetings, with little or no public engagement. Please consider attending tomorrow at 10:30 am in the Board Room at 95 Perry Street in Buffalo.

The current issue involves the final adoption by the City of Buffalo of the Unified Development Ordinance, aka the Buffalo Green Code. This plan codifies condo development on parcels embraced by ECHDC and developers on sites adjacent to the Times Beach Nature Preserve. While the Our Outer Harbor coalition does not opposed the Green Code in general, they are against the zoning that would allow private condos next to Times Beach. Below is an open letter provided by the Our Outer Harbor Coalition that describes the issues.

The Buffalo Greencode is undergoing final approval by the City of Buffalo Common Council in the next two weeks. Our Outer Harbor wants you to know that the publicly owned land across from the Times Beach Nature Preserve on Fuhrmann Blvd. is zoned to allow housing in the Green Code. We are concerned because housing at this location will negatively impact the Nature Preserve. It will also establish a precedent for condominiums on the Outer Harbor.  We need your help. Please consider coming to one of the public hearings described below, or submit a comment.  Below is a letter from one of our partners Margaret Wooster with a more detailed explanation.
Dear friends,
This is our last chance to get it right. The Common Council plans to adopt the final version of Buffalo’s new Green Code by the end of this year.

Our Lake Erie coast is a regional amenity, so whether or not you reside in Buffalo, please come and speak and/or write in your comments by Nov 22 to Council Chief of Staff Dinash Lal: dlal@city-buffalo.com
The Our Outer Harbor campaign has reviewed the lastest revised Green Code which has incorporated many of your and our recommendations. But a few important clarifications are still needed for the Common Council to effectively do its job in reviewing development permits for the Outer Harbor Special Review District:
No housing should be permitted on Outer Harbor public lands.The proposed Green Code housing designation “N-3E” defined as “Mixed Use-Edge” is on former public NYPA lands across the Buffalo River from the Inner Harbor. This land should not be designated for private residential development. Instead is should be designated “D-OG” defined as “Civic Green/Park,” and treated as a gateway to the Outer Harbor Park. See attached map and rationale for this recommendation.
Please see our website for more information on the Outer Harbor: www.ourouterharbor.org
Thanks,
Margaret Wooster