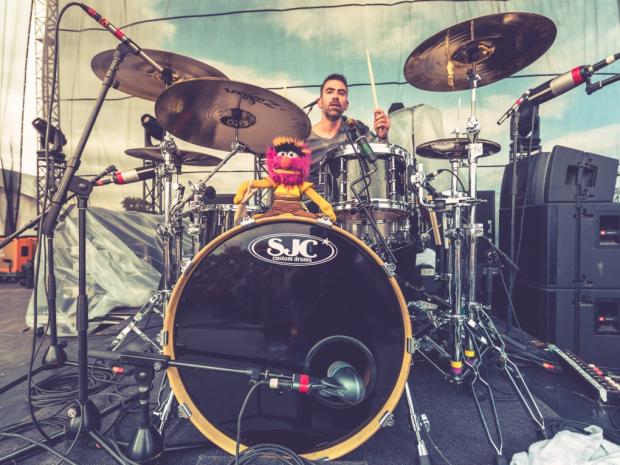 They don’t call New Found Glory the “godfathers of pop-punk” for no reason. The band from Coral Springs, Florida has been one of the foremost influences on so many bands that are starting to emerge in the budding new pop-punk scene; to the point where some are named after NFG songs (lookin’ at you The Story So Far.) The band has recently gone through some big changes, most notably becoming a four piece after the departure of guitarist Steve Klein. However, the band recently released their new record, “Resurrection,” which features a heavier, riff driven sound and lyrics that show the band is ready to move forward and put the past behind them. We recently had the chance to interview drummer Cyrus Bolooki before their recent concert in Buffalo for the Glamour Kills tour to him about the recent changes and evolution of the band and its sound.

The Public: It’s been a bit of a year of change for you guys. You’re now officially a quartet and your new was released about a week ago. The title Resurrection definitely seems appropriate following all of the changes that have happened. Do you see the current incarnation of your band as a bit of a rebirth in terms of sound and style?

Cyrus Bolooki: The core members of the band are still the same, but we definitely feel stronger together in terms of how we’re treating each other. And going into Resurrection we knew we wanted to write as a quartet. The great thing about this record is that it’s very guitar riff based, so that’s something we strive to do because it highlights just one guitar. In the lyrics as well, we had a lot to draw upon going into this record beyond the normal guy and girl lyrics, so in these respects I definitely think Resurrection is a very good reflection of our band right now.

P: The new record is certainly an interesting one, as a lot of the songs definitely have the message of starting again and finding a new direction, but some of them also have this dark and bitter tone to them. Is this something that was intentional coming off of recent events, or something that happened naturally as the songs were being written?

CB: I think it’s a little bit of both. I don’t think we could really help but react to the events that were going on. But at the same time we write our songs from ourselves; from our hearts. We don’t want to tie them to anyone or anything specific. We still want to have songs that can be related to by anyone, and if you listen the songs are still about things that could happen to anyone. The themes are pretty universal still.

P: In terms of the music, I would say this album is a bit heavier than your last record, Radiosurgery. Was that also a conscious decision, or something that resulted from the lineup change, and thus a mindset shift in terms of writing?

CB: I think it was a bit of both again. The riff driven songs were definitely a huge factor, but if you look at a lot of our early songs, a lot of those were very riff driven as well, so I sort of see it as a return to that form for us. When Radiosurgery was being written, we were listening to a lot of the Ramones, so that’s where the sound of that record really came from. We had the chance to go heavier, but the new songs are still very poppy and melodic overall. They fit in very well in a live setting

P: You guys are hugely influential to a lot of young bands out there and I know you guys have quite a good amount of experience playing with young bands on warped tour, but what’s it like playing with some of these young groups and sharing space with them in a more compacted and concentrated way on a tour like the Glamour Kills?

CB: We love it. Everyone on this tour we’ve played with before. Playing with bands that we’ve seemed to influence…it’s very flattering. It’s cool to think about how we just started off playing music for the sheer enjoyment of it, and now thinking about what kind of an effect we’ve had on these young groups. Back when we were getting started we looked up to a lot of other bands, and now I feel that we’re giving back in a sense.

P: Is there a different dynamic between you guys both on and off the stage as a quartet, or do you think things have pretty much remained the same? Do you think the songwriting dynamic is going to change in the future?

CB: If the songwriting dynamic was going to change, it would have already happened. We definitely feel like where we’re we need to be. Our recent events are a way for us to show others who may be going through tough things that there is light at the end of the tunnel, and you can persevere over anything you may be going through.

P: How has the response been from the fans to the new songs and new record on the tour so far? Have they embraced the new lineup?

CB: I think there’s been a really great response to the new songs from the fans. They’re out there singing every single word and they’re showing a great deal of enthusiasm.

P: So what lies ahead for New Found Glory? Do you think this new situation where you’re at right now is a good place to be for the future of the band? Is there a particular message you wanted to send to the fans with the new album?