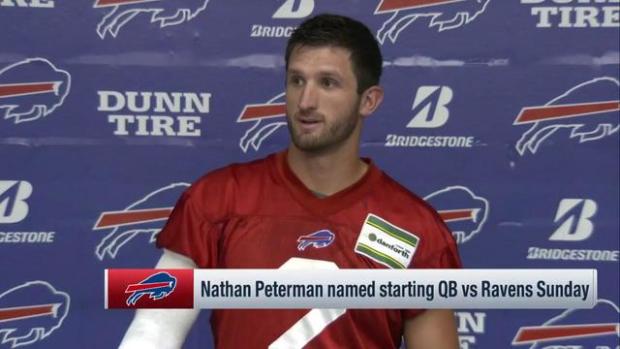 When I woke up today, the world intercepted my happiness and ran right by me. I knew I would never see it again. I wanted to wake up my wife, tell her what happened, but she was fast asleep and she looked so peaceful. And I wasn’t feeling peaceful. I didn’t want to disrupt her calm, you know? What kind of a husband would I be if I did? What kind of Christian? Philippians 4:13, “I can do all this through him who gives me strength.”

But I won’t lie to you…it’s tough. It hurts. To be called the worst quarterback in the history of the NFL? That’s a tough pill to swallow, even for the strongest of men. Am I that bad though? The world seems to think so.

When I woke up today, I saw that one Bills fan started a GoFundMe to get me to retire.

“Nathan Peterman, we understand your passion to play football and especially in the NFL, but please for the love of God retire and leave and never comeback. We will give you money, just leave.”

People in this city hate me. It’s worse than hate. Maybe there’s not a word for it. Some nights, I can’t even sleep, terrified that the Bills Mafia will drag my body out of bed, take me to Orchard Park, that wooded hellhole just south of the city, and all along the 90, there will be these flaming tables and they will slam my half-sleeping body into every one of them. I’m powerless to stop them. Then they will pour cheap Canadian beer all over my broken body. But they won’t stop there. They will bury me alive in a coffin at the 50-yard line of New Era Field and although people will know I’m missing, nobody will come look for me. They will convince my family and friends that I just couldn’t take it anymore, that the pressure and criticism broke my spirit, that I fled town to start a fresh life somewhere in a country where football doesn’t exist.

But the nightmare doesn’t end there. My soul will never find peace, trapped beneath the cursed turf of New Era Field. The stadium will be my haunted house and I will never pass through the pearly gates and throw a touchdown to Jesus. Years down the road, my name will pass into horrible legend and everyone in Western New York will blame me for their bad luck, for their blue-collar heartache, for their failing marriages, for their drunken ways…and a group of exorcists and paranormal investigators will circle the stadium like a story in the Bible and try to purge me from the earthly realm. They will say that I always miss the mark, even in death.

They say I’m known for my interceptions, that they are the white tigers to my Siegfried and Roy. This one website even said that I’ve elevated bad quarterback play to an art form, that I deserve my own wing in the Louvre. It’s my gift, they say. I’m the NFL’s greatest performance artist! I leave my audience spellbound! The whole country almost had a heart attack when I came in for the injured Josh Allen and threw a pretty-looking touchdown pass to an actual teammate of mine.

I thought this was it. Here’s my moment. Like that song in Hamilton. Finally, I can be the hero. The winner. The savior of the city! Well…that feeling didn’t last and I threw two interceptions in the last couple minutes of the game and the Texans won. And everybody hated me again.

Hey God, I know I shouldn’t doubt your plan for me, but what the fuck? Why the torture? The constant name calling? The sleepless nights? Am I like Job, full of sores and boils, full of pain and sadness, who leads a good life and is still punished? I have not sinned. I have not cursed God in my heart. Yet a whole city wants me dead. A whole country laughs at me every week. How do you know when enough is enough?

Maybe you’re the problem, not me. Every one of you. Who hate their lives. Who accomplish nothing. Whose whole houses are built on the foundations of others. Who sit on your asses while your lives pass you by. They say the NFL is too fast for me, that my little mind can’t grasp the complicated defensive schemes, that I don’t know how to react when pressured or how to dance when the universe takes a sudden turn and gives me trouble. You know…

Maybe I am the hero, the loser, the symbol all of you deserve. Just look at the world around you. It’s falling apart and getting worse by the minute and what are any of you doing about it? Nothing! A bunch of mannequins sitting on your couches. You’re a cancer. Tumors that grow out of ripped couches until they burst into nothing, into air, when couches are crushed into fine dust when your houses are bulldozed over. What are any of you doing but staring at TVs pretending to be other people. If life is a football game then all of you are throwing interception after interception and you will never win the big game in the end. I suck? You suck! Maybe I can get used to being hated. It’s a whole lot better than being ignored your whole life. You know…

I’m going to keep doing what I’m doing. The bad quarterback magician that ruins lives. Maybe that’s what my purpose on this planet is, to turn people away from their false idols and back to the light.

I’ll see you all on Sunday, even if I take the field or not. I’m in your hearts now. I’ll be there forever.

Justin Karcher is a poet and playwright born and raised in Buffalo, New York.