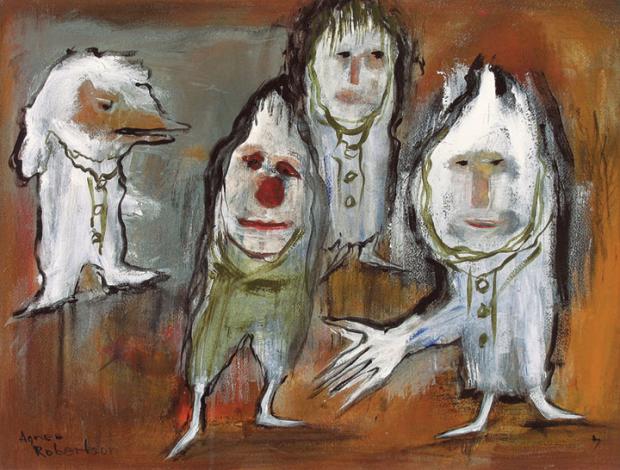 Agnes Robertson and Francis Toole currently on exhibit at the Meibohm Fine Arts Gallery are very different artists and each quite original, but their works have something in common. Robertson is a painter and her works feature dream-vision strange to alien-looking human and animal figures, comical wraith-like, ghostly. Whereas Toole is a sculptor whose current works are elaborate constructions of heavy-gauge white paper cut and folded and glued usually into rather fantastical figures—animals most often—in a flurry prodigality of cut paper bits and pieces, sometimes tending toward more abstract pattern arrangements.

What the two artists have in common is that in both cases their works reflect stories. Seem to reflect stories. Stories more implicit than explicit. In the case of Toole, stories usually based on folk tales. In Robertson’s case, stories based vaguely on old literary models. Possible apocrypha, metamorphoses stories, stories from Dante.

Including several stories from each artist with a common—shared between them—theme. A peace and harmony theme. Of mutual help. Or help offered or given.

Toole has gone to the length of writing out the stories behind a couple of his pieces. Though it wasn’t necessary. The works tell or suggest the story sufficiently. A piece called Blind Bird depicts a bird sitting on the back of a four-footed creature that turns out in the story to be a dog. The bird can’t see, but is said to have an excellent sense of smell, which this particular dog seems somehow to be lacking, though the dog’s vision is excellent. So that between the two of them—each one supplying what the other one lacked—they are able to find and feed on “seeds, insects, leftover picnic food,” the story relates. A redo—different animals, different circumstances—of various Grimm’s fairy tales.

Another piece is called Cat Bird, and the story about mutual help again. A sculpture of a bird and a cat this time, with the bird on the back of the quadruped again, but in a quite different representational style than the bird and dog piece and most of Toole’s other work in the show (with decorative effects a little reminiscent of a Mexican piñata—surface frills and ruffles). Flat surfaces and blocky construction in this case. Or flat embossed—versus aflutter—with paper bits and pieces.

Original work, but not uninfluenced by works of other artists, ancient and recent. A statue of an Egyptian cat from seventh century BC and the work of New Yorker cartoonist Saul Steinberg in the bird and cat piece. Burchfield also an influence. Burchfield saw eyes peering from hedgerows of trees in the evening in the distance. Similar eyes peer out of one of the abstract conglomerate works Toole calls Grove.

The only humans among the sculptures are Adam and Eve in a piece called Eden. Like a medieval altarpiece diptych, with a flavor of Steinberg again.

Robertson’s stories are harder to fathom. Some possibly personal stories. And some that seem derived from or otherwise in reference to a literary model. But maybe taking the model story in a completely different direction. A possible apocrypha source for the piece called Deserters from the Ark, showing two quadruped creatures—unclear as to species—in a little boat and rowing furiously, and above them three flying creatures—not clearly avians even—heading in the same direction. Metamorphoses stories in various works where one thing becomes something else. Trees become people, people become trees. Facilitated by nothing being securely and exclusively one thing or another in the first place. And Dante stories, which are also often metamorphoses stories. Suicides in the Inferno are transformed into twiggy vegetation that is still somehow the suicide. When Dante breaks off a twig from one of the bushes, the bush talks, tells him the break was painful, then tells him something of his life story in the upper world. A Robertson painting not in the Meibohm show, owned by the Burchfield Penney, is of a huddled group of possible humans in a barge-type boat crossing turbulent waters. It’s called On the River Styx.

The particular help or mutual help Robertson works include one titled, oddly, Untitled: Helping Hand, and another called Bicycle Rider, showing a big guy helping a little guy ride a bike, learn to ride a bike.

The Agnes Robertson and Francis Toole show continues through November 21.