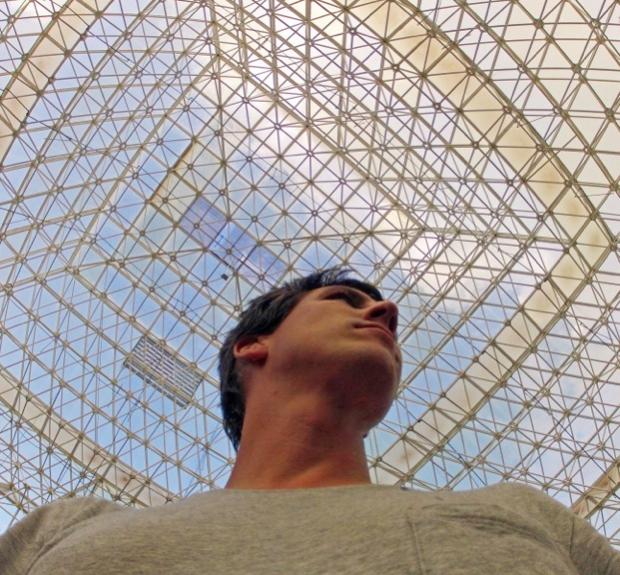 An Interview with Nick Zammuto

Formerly one half of weirdo indie rock band, The Books, Nick Zammuto is a prodigy. The musician, who built his own house in highlands of Vermont, is not only talented at bending sound to his will, but he knows how to build a mean catapult as well. Last week, Zammuto and his band played an intimate, sonically unique, and even at times hilarious show at Mohawk Place. Prior to the show, BuffaBlog guest hosted our interview with Zammuto. Below is an expcerpt from the piece. To read the whole interview, check it out on BuffaBlog.com.

Leaves cover the ground in a rural area of Vermont, where musician Nick Zammuto—known for the wildly collaged pop music he made with indie rock band The Books in the early 2000s, and for his heart-achingly beautiful and weird solo material—wakes up and feeds his kids. After having breakfast with his family he takes a short walk to a small cabin a few yards away—originally an unfinished tractor garage, which he converted into a studio by adding everything from a floor to insulation and soundproofing—where he’ll spend the day combining basslines and chopped up vocals, cryptic samples and driving drums. On a nicer day, he might chop some wood first or check on his bees. He harvested his own honey for the first time this fall, with the help of his wife and mailman.

Zammuto lives a homesteader life, in which everything from his music to his music videos are do-it-yourself and produced in a self contained environment; his 16 acres of land in southern Vermont where he turned a “ramshackle farm building” into a home for his family. It hasn’t been all good times and fun for Zammuto, though. In 2012, his long time band The Books—himself and cellist Paul de Jong—ended a 12 year run during which time the band churned out groundbreaking collage pop records like their 2002 debut, Thought for Food, and their final album, 2010’s The Way Out. Though Zammuto hasn’t talked much about the circumstances behind the break up of The Books, it was, by what little account there is, a rough break up that forced Zammuto to consider giving up music all together. He bounced back pretty quickly, though, and only a few months later released his debut solo album Zammuto, an experimental electronic album that pitched between spastic drum beats, heart wrenching vocals, and strange samples. In September, Zammuto released a follow up, Anchor, a beautiful, cold, haunting, and rhythmic set of songs that have changed the way the band performs live. After opening for Gotye earlier this year, Zammuto brings their headlining tour to Mohawk Place on Thursday, November 6th. This week, we talked to Zammuto about Anchor, and how he learned to build a catapult, harvest honey, and bend sound… Click here to read the full interview at Buffablog.com