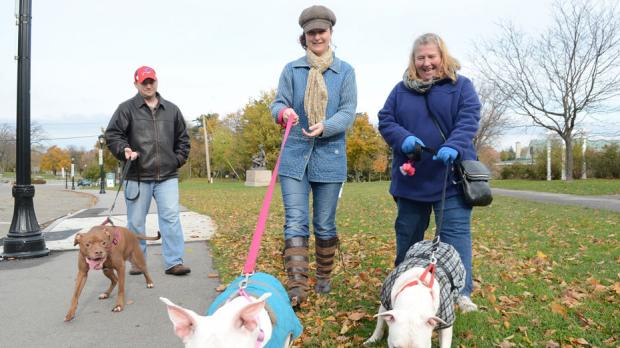 Three adults each walked a pit bull along Lincoln Parkway on the crisp and vividly sunny Sunday morning of November 9, close to the seated bronze of young Abe Lincoln on the parkway named for him. Not far off, dozens of runners and cyclists zipped through the park–two 5Ks were underway, routes not overlapping.

As I began to get the story behind the sextet of adults and dogs, a couple in a large SUV pulled up to inquire about the beginning of the road race benefitting Girls on the Run. After explaining that a left, right, and then another right would get them there, they drove off with leeriness in their eyes: They were in Delaware Park, how did all those turns land them in another part of the same park, they wondered.

The dog-walkers—Garth Courtney (walking Champ), Julia Courtney (walking Lucy), and Jeanne Zach (walking Helen)—had been out in the park for a while. This was, they explained, the fifth of a series of meet-and-greets for these dogs.

Helen, a deaf, all-white pittie (as their fans call them) has been fostered by Jeanne, a volunteer for Ecuate-A-Bull. Helen came from a “backyard breeder” and it’s estimated that she’s a bit over a year old. Champ, bouncing about a lot for a dog who’s 11, also came from a backyard breeder in Cheektowaga. Lucy, age 10, is a more-frail dog with “special needs,” according to Garth and Julia.

Jeanne, who’s fostered ten pit bulls to date and who owns three, says that there is no such thing as a breed called pit bull, it’s actually several breeds, or a mix of certain breeds. When asked about the temperament of a pit bull, and the occasional stories about them, she says, “You have to treat a dog as an individual, just like a person. Pit bulls are super loyal, great with families. If they’re socialized when young they can interact with other dogs and people, I recommend puppy classes and doggy daycare. Every dog benefits from socializing.”

Garth talked about pit bulls being “massive lap dogs, they’re warming blankets, perfect when you’re watching a movie or a game.” Julia adds that it’s wise with any dogs to “keep them apart from other dogs when walking, it’s smart not to let them go right up to each other.”

The trio explain how deaf pitties learn hand signals, and how, on occasion, the stomping of feet on the floor is used to get their dogs’ attention. Jeanne says that when she wants Helen to come in from the yard, she flicks lights off and on.

The Courtneys have already decided that they wanted to adopt Helen. As I walked to my car the three were making arrangements for their next meet and greet, Julia overheard saying, “We’re ready.”