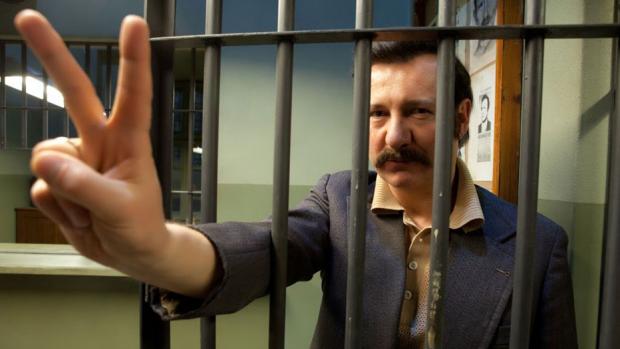 There was a time when it would be unthinkable for a new film by Andrzej Wajda not to be picked up for theatrical exhibition in North America. Yet his 2013 film about Lech Walesa, which may well be his last (Wajda is now 87) hasn’t even been released here on DVD, much less put into movie theaters.

So give thanks to the Polish Film Festival, presented yearly by the Permanent Chair of Polish Culture at Canisius College. Now in its ninth year, it is a small but dependable showcase highlighting some of the best recent movies from a country with a rich cinematic heritage.

A kind of continuation to the films that brought Wajda to international attention, Man of Marble (1977) and Man of Iron (1981), Man of Hope is the story of the charismatic man whom many saw as leading Poland out of Communist control by organizing the country’s workers in the movement known as Solidarnosc (Solidarity). Framed by an interview of Walesa with journalist Oriana Fallaci, the fictionalized film follows him from his days as an electrician caught up in the Gdansk Shipyard strike of 1970 up to becoming president of Poland in 1990. Robert Wieckiewicz, who starred in the Oscar-nominated Polish drama In Darkness, makes a persuasive Walesa (it’s largely in the moustache). Wajda and writer Janusz Glowacki make a point of presenting Walesa’s not-inconsiderable flaws as part of their portrait, though like everything about the man it provoked controversy when it was shown in Poland. It will be shown at 7:30pm on Saturday.

A more distant part of Poland’s history is illuminated in Stones for the Ramparts (Kamienie na szaniec). Set in the early years of World War II, it is a true story based on the paramilitary activities of the Szare Szeregi (Gray Ranks), formed from the remnants of the Polish version of the Boy Scouts.  Chafing under the restrictions of the occupying Nazis and more energetic than their parents who remember the hardships of the last war, these young men engage in subversive activities like smoke-bombing movie theaters during the newsreels of German propaganda. (Of all the reasons we’ve had to hate Nazis over the years, here’s a new one: They ruined going to the movies!)

The high spirits of the film’s early scenes (driven by a most uncontemporary rock score) become more serious when one of the young men, Rudy, is captured and tortured to get information about his mates. A rescue operation is mounted but subject to the approval of the resistance’s leaders, who have their own agenda. It’s a gripping, intense film, possibly a bit too much so for some viewers during the torture scenes. It will be screened Friday night at 7:30pm.

The highlight of this year’s series for me is the Buffalo premiere of Chce Sie Zyc, which received both the jury prize and the audience award at the Montreal World Film Festival in 2013, where I first saw it. (The somewhat unfortunate English title is Life Feels Good.) Based on a true story that combines elements of My Left Foot and The Miracle Worker, it follows the childhood of Mateusz, played as a boy by Kamil Tcakz and as a young man by Dawid Ogrodnik in two physically astonishing performances. Born with cerebral palsy but misdiagnosed as being mentally retarded (the film is harsh in depicting the Polish medical system), Mateusz is raised in a loving household that cares for him but is never able to communicate with him. Writer-director Maciej Pieprzyca ably navigates the high and low points of the story, leavening its difficult premise with surprising touches of humor. It will be featured for a Sunday afternoon matinee at 3:30pm.

At the Montreal press conference for Life Feels Good, I was astonished to see that star Dawid Ogrodnik is not actually afflicted by cerebral palsy in real life. You may have seen him in a supporting role as a young saxophonist in Ida, which had an extended run in Buffalo theaters earlier this year and which has just received five major nominations for the European Film Awards, making it a likely Oscar contender. If, like me, you never got round to seeing Ida, you’ll have another chance when it opens the festival Thursday at 7:30pm.

Ida follows a young novitiate, raised in a rural convent, who learns about the dark history of her family when she visits the town of her birth with her only relative, an aunt with desperate secrets to keep. Reviewing it for its commercial run, my colleage George Sax called it “disturbingly involving and quietly provocative….[director Pawel] Pawlikowski renders this story with a spare style, sometimes elegantly.”

All features in the Polish Film Festival will be accompanied by recent short films in the best tradition of Eastern European animation. Screenings will be at the Montante Cultural Center (2001 Main Street, a block south of the Kensington Expressway). Tickets are $10 general admission, $5 for students and senior citizens. For more information visit canisius.edu/polish-chair/polish-film-festival/.