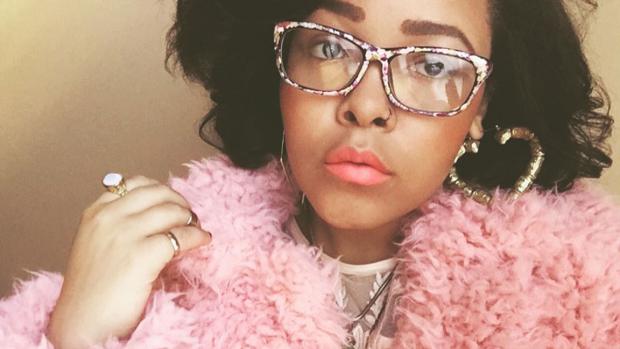 What is it like to be a teenager with pop star aspirations? Part of it, of course, is the excitement of racking up the retweets and Instagram likes. But that internet attention doesn’t just come out of nowhere, it has to be fueled by a solid, real-life support system. After a string of shows in Boston and Toronto opening for the pop act Raury, 19-year-old Alexis Gray—also known as Saint Opal—is enjoying the social media bump that those shows have earned her, but she also realizes that she wouldn’t even be up on stage if it weren’t for her grandmother, her musician friends, and all the other people in her life who have pushed her to pursue music.

On Friday, November 13 at 1526 Main Street, she’ll host a viewing party for the new music video for her song “Lilac Corona,” where she’ll put on a special performance with support from DJ Milk and Black Sol. She’s asking attendees to wear all black attire.

“The song is about this relationship between two people. It’s a bad relationship and I’m kind of this negative spirit that comes out of it,” she says over the phone. Her music is clearly influenced by the darker R&B sounds coming from artists like FKA Twigs, Kelela, Natasha Kmeto, and Abra, but she’s also inspired by filmmakers like Wes Anderson. Gray studied film and dance at the Buffalo Academy for Visual and Performing Arts, from which she graduated in 2014.

“Once I got out of high school and stopped dancing, I felt like I was not doing anything artistic,” she says. “I was looking for something to do and my grandma offered to pay for some singing lessons, so I was like sure why not?’” Soon after, her friends in the local hip hop collective Black Sol urged her to begin writing her own songs. “So I did,” she says. “I wrote a song called ‘Glass Jars,’ but I thought it was weird and I wasn’t sure how people would feel about it. Once I tweeted it, people were giving me really good feedback on it, so I thought it was fun.” Over the last year she began sporadically performing local showcases before her friend Shawn Patterson hooked her up with an opening slot for Raury.

“As an artist, Saint Opal has limitless potential,” says Patterson. “On tour people would come up to tell her how authentic and genuine she is. That translates in the music.”

As for all new performers, much of her preparation for a performance involves managing nerves, which she acknowledges is a hurdle. “I try to be nonchalant about it. I try to just think of it as another show. I try and just enjoy the music and say or do whatever I’m feeling.”

Despite her nerves, she took the stage and, from what she could gathered from feedback from her newfound fans after the show, she did a good job.

“It was a really amazing. The people in Boston were so kind to me and a lot of them followed me on Instagram. One girl gave me some crystals because she thought I did so well,” she says. “It’s really exciting to meet people who don’t know me already as Alexis and who are just meeting me as Saint Opal. Just from the 20 minutes I had in front of the crowd in Boston, I’m feeling so much love. People are commenting on my pictures and messaging me and inviting me to come back to Boston and stay with them.”

These couple shows in Boston and Toronto might not seem like much, but they mean a lot to Gray, who wants to use music as a means to travel and meet people. “I want to be able to travel all over the world and reach out and touch different cultures and meet different people and share my experiences with them and learn of their experiences and be inspired by it.”

The experiences she believes are most worthwhile for her to share deal with dark places. She says that throughout middle school and high school, she’d often have dark or scary thoughts that she didn’t know how to deal with.

“Sometimes I still go to those places. Now I think I have more control, but sometimes I’m still thrown in there. I didn’t accept that part of myself, I thought I was crazy. But it’s fine to get like that sometimes. It’s a part of life and I want to show people that sometimes you have a bad side of yourself. You can work on it and it’s manageable and once you accept it, it’s easier to function.”

As is the case for many artists and musicians, music has been a therapeutic outlet—a release. “I think my music comes off a little bit darker,” she says. “I think that’s because sometimes I’m just writing from that place to release those emotions out of me.”

At the end of the day, she says her ultimate goal as a musician is simply to make other people feel good about themselves.

“I like to comfort people. I want to make people feel good about themselves no matter what form they come in. It doesn’t matter if you’re a woman or a man or both or if you don’t want to be either. Whoever you want to be, it’s cool to just be who you are.”