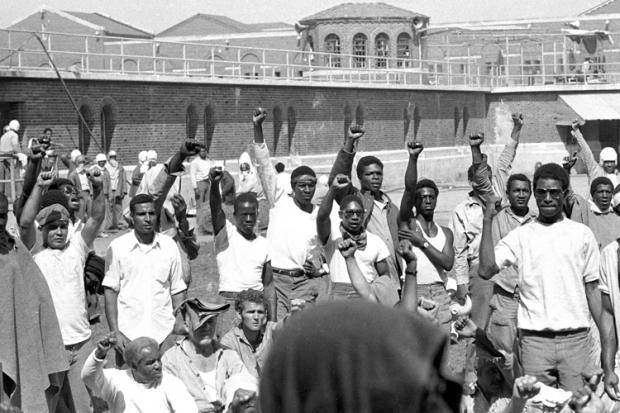 The title of this is an oxymoron, I know, but I don’t know how else to describe what I’m writing about here. “Oxymoron” is not an eight-sided-idiot, as the roots of the word would suggest; it is rather a phrase the parts of which contradict one another, as in “make haste slowly” or “act naturally” or “open secret” or “living dead.”

In this case I’m thinking about the 6,000-page report by the Senate Select Committee on Intelligence having to do with the CIA’s program of rendition, secret detention, and torture of people it suspected of—well, that’s secret too. The Senate Committee doesn’t tell us what tortures they looked at (though if you’ve seen the Abu Ghraib photos you have an idea). And I’m thinking also about the second and third volumes of the Meyer Commission Report, which has to do with the slaughter in New York’s Attica Correctional Facility on September 13, 1971.

Both are documents created at great expense by public agencies—one a committee of the US Senate over three years, appointed to examine how and why the CIA violated all sorts of US laws over a seven-year period; the other a committee appointed by then-Governor of New York Hugh Carey to find out why 29 prisoners and 10 guards were shot to death by state police, corrections officials, and miscellaneous bystanders with guns, in Attica prison on September 13, 1971, and why hundreds of inmates were tortured in Attica subsequently.

Both of those reports are about illicit violence by government agencies against individuals. As of this moment, we cannot see either of them.

The CIA renditions, detentions, and tortures happened during the George W. Bush Administration. At least one government attorney came up with elaborate rationales having to do with why it was okay for the US government to scoop people off the street in another country, sometimes send them to a different country to be tortured (that’s what the euphemism “rendition” means) and to keep them under lockup indefinitely (Guantanamo is still a prison operated on foreign soil by the US military where people are detained under conditions that are wholly illegal in the United States).

The Senate Select Committee crippled itself from the beginning. It chose not to look at the behavior or choices of officials like President George W. Bush, Vice President Dick Cheney, or Justice Department attorney John Yoo (who wrote the memos saying why it was okay to detain and torture foreigners). The report considered only the CIA’s behavior. So there was major self-censorship before the three-year study began: The Senate decided to look at things a government agency did and to ignore the directives from and rationales of higher government officials that set those behaviors in motion.

What’s worse: getting your joint copped during working hours or starting a war under false pretenses and authorizing methods of arrest, detention, and torture that all were all explicitly illegal under US law?

And the beat goes on: House Speaker John Boehner has spent millions of public dollars on a lawsuit against President Obama because he doesn’t like the way Obama legally uses his executive authority. Thus far, two prestigious law firms have taken on the case, carefully examined Boehner’s “evidence,” then bailed out because they couldn’t find a case there.

So it’s not that Congress couldn’t look at what set the CIA misbehaviors in motion; Congress chose not to look. It’s like investigating the hit man but not the person or organization that hired him and told him who the target was and where he would be found.

We have laws against kidnapping, torture, and detention without charge. They are all grounded in the Constitution; the US government engaged in all three, perhaps the worst of it in Iraq, a country we invaded because of “weapons of mass destruction” it didn’t have and because of its involvement in 9/11, which it didn’t have either. Which is to say, we engaged in a bogus war (that destabilized the region), then engaged in activities—at Abu Ghraib, Guantanamo, and who knows how many secret prisons in how many countries—in activities that were and continue to be illegal in the US.

The Senate Committee not only limited the scope of its inquiry, but allowed the CIA to vet what parts of its report would be made public. Apparently the CIA made so many cuts that the brief document that remains is gibberish, which no doubt was the CIA’s intent. As of today, the White House, the Senate, and the CIA are still squabbling over how many of those emendations will be allowed to stand and how much of the report, if any of it, will ever be released to the public.

There are 6,000 pages in that blind-eyed Senate report. We will eventually get to see only a fraction of them. Like footprints in the sand after the next wave comes in, we will have no idea of what is no longer there. Why? To protect whom or what? Who is served by that protection? Not the public, surely.

The Attica deceptions started immediately: Prison officials told members of the press that the dead hostages all were victims of convicts who had slit their throats and who had, in some instances, castrated them and put their sliced-away genitals in their mouths. They were lying. A few days later, the Monroe County Coroner reported they all had been shot to death; nobody had been castrated. He was subsequently ticketed so often on the New York Thruway that he left the state.

The Meyer Commission report on Attica is more parochial than the Senate Select Committee report on the CIA—it involves only behavior by New York State officials on a single day 43 years ago—but the issue is the same. A group of individuals was appointed by the governor of New York to find out and tell us the truth of what happened in one of the most violent encounters between agents of government and American citizens since the Civil War. It was headed by New York judge Bernard S. Meyer. When the report was completed, only a third of it was released.

Recently New York Attorney General Eric Schneiderman tried to get the other two volumes released. Erie County Supreme Court Judge Patrick H. NeMoyer ruled on April 24 of this year that the two suppressed reports of the Meyer report could be released—but only after all names and all evidence presented at the grand jury hearings were redacted. That is, only after the report was fully gutted. After it was rendered meaningless.

Why? Who opposed Attorney General Schneiderman’s attempt to let the sunshine in one of New York State’s great atrocities? The New York State police and police union. Whose interests are being served? Not the public’s, surely.

Just as the CIA is getting to block the key parts of the Senate Select Committee’s report on CIA misbehavior during the Bush Administration, the New York State Police are blocking Schneiderman’s attempt to let the public know the facts of New York State Police behavior in Attica prison 43 years ago.

I sat through nearly every day of the Attica convicts’ civil rights trial in Federal Court in Buffalo. The case took 20 years to get into court and then took four months to run its course. It began in mid-October 1991 and ended February 4, 1992. The trial was before Judge John T. Elfvin. You would think that a trial in federal court is one place the truth about an event in a state prison could come out. There are unambiguous rules about evidence in federal court, and federal court trumps state preferences every time. The state wanting to protect itself (five or six governors back) couldn’t cripple a case in federal court.

All sorts of things were hidden from the jury. I’ll give you one example. There were many photographs of the slaughter, one group of which interested me in particular. They depict a dead convict, James Robinson. One shows him in a football helmet with the kind of high chair line judges at athletic events sit in across his body; another shows him in the same position but the chair is gone; another shows him in the same position, without the chair, but with what looks like a crude scimitar under his right hand. Some of the prints are black and white; some are in color. I don’t know if they were taken with different cameras or if there are multiple versions of the same image.

Why would anyone do that? To make the dead man look villainous. Who was in a position to have planted that scimitar? You can figure that out as well as I.

But no one on the Attica civil rights trial got to see those photographs or hear the lawyers argue their significance. Judge Elfvin ruled that none of the photographs of the retaking could be shown to the jury during the trial (they might be inflammatory, he said), but the jury could see them when they retired for their deliberations. When the arguments ended and the jury retired he said the photographs couldn’t go in to the jury room because they hadn’t been introduced into evidence and they might confuse the jury. So the jury never saw them. In a trial about indiscriminate shooting and deliberate torture, the jury was not allowed to see photographs of the effects of that shooting and torture.

I don’t know how this factored in the case, or if it did at all: Judge Elfvin was campaign manager in upper New York State for Nelson Rockefeller during one of his gubernatorial campaigns; Rockefeller appointed him to the State Supreme Court; he became a Federal District Court judge very soon after Rockefeller became vice president in the Gerald Ford Administration.

And the jury never saw those photographs.

There is a famous phrase attributed to the Roman poet Juvenal: Quis custodiet ipsos custodies? Who shall watch the watchmen?

In the case of Attica slaughter, it was a special commission, headed by a highly respected judge. In the case of the CIA abuses, it was a Senate Select Committee, headed by Diane Feinstein. They both produced detailed reports. Both limited themselves in what they would look at. We have been allowed to see neither report and the chances are very good that we will never see either report in full.

Why have the Senate and the White House permitted the CIA to be the editor of a key report on CIA behavior? Why are the New York State Police still fighting (successfully) to keep secret the truth about a morning of unspeakable violence 43 years ago?

Government agencies protect themselves, even if all the villains are long gone. The institution takes priority. The guys here now didn’t do whatever it is we’re looking at, but there are people here now who sit in the chairs those people sat in. Protect the chairs, protect the institution.

So the question isn’t just Quis custodiet ipsos custodies. What does it matter who watches if only darkness and silence ensue?

We know that successors protect predecessors, because they inherit things the processors set in motion, as Obama inherited two George W. Bush wars we’re still not out of. As he inherited Guantanamo, which he has still not been able to get us out of.

But what about people we ask, after the violence is over or has settled down, to look at it, to tell us what really happened?

It turns out they, however much work they do, however seriously seek the truth or pretend they are seeking the truth, are often crippled too. Those vile events happened. But those government agencies are not going to tell us why, how, and why they won’t happen again.

Bruce Jackson is SUNY Distinguished Professor and James Agee Professor of American Culture at UB; he is also an associate member of the UB Law School faculty. In spring 2015, he’s giving a graduate seminar in the UB Law School and UB English Department on the Attica uprising and its aftermath.