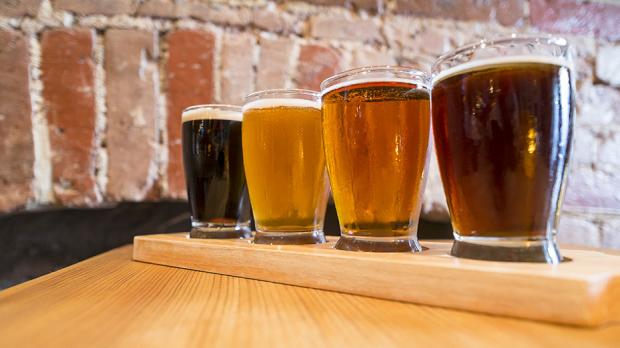 As Buffalonians festival-hopped over the summer, gnawing Italian sausage and downing light beers, certain men stockpiled supplies. Thinking ahead to when the parties would end and the weather would cool, they gathered local hops. They ordered German malts. They installed tanks in new spaces.

Now that the outdoor bashes are over, we’re ready to drink something rich and hearty. The city’s craft brewers have got us. They were inspired by fall tastes like caramel, apple, oatmeal, allspice, and inevitably, pumpkin. They infused the flavors into a wide range of beers, from ales to stouts to bocks, and even a red IPA.

And there are more local breweries than ever. Resurgence and Gene McCarthy’s started making beer earlier this year. Big Ditch opened in October. And even mainstays tried new things—Flying Bison built a new brewery on a different side of town, Larkinville.

Here are our picks for some of the best seasonal beers being crafted within Buffalo’s city limits—and the breweries, both new and old, for exploring them.

Vanilla Cappuccino Pumpkin Ale
Open since June, Resurgence is ambitiously mashing up flavors. The buzziest mix right now is Vanilla Cappuccino Pumpkin Ale. Its flavor is coffee-forward, without the heavy richness of stout, coffee’s usual partner, for balance. Vanilla aromas float through, although the pumpkin is a little harder to pick up. Give it a whirl at the former Sterling Motors building, which Resurgence has made into a social scene with a fire pit, picnic tables, and games like oversized Jenga and darts. Then brace yourself for what to try next: “We have some crazy tricks up our sleeves,” assistant brewer Erik Greiner says. Resurgence Brewing Co., 1250 Niagara St.

Jack the RIPA Red IPA
The four-floor downtown institution that is Pearl Street Brewery is welcoming beer lovers in for something new: a Jack the RIPA Red IPA. It has a clever Halloween-sparked name and a simple story. “Honestly, the colors of fall inspired us—red for the IPA, brown for ale,” brewer Chris Herr says. He and partner brewer Brian Vaughn did five hop additions and bumped up the caramel malts to arrive at a deeper color. The resulting taste is easy for even non-IPA-lovers to appreciate—smoother and less bitter than its lighter cousins, although the hops hit on the finish. Pearl Street Grill & Brewery, 76 Pearl St.

Cinnamon Apple Amber Ale
A new kid on the block, Big Ditch Brewing figured, “Why not do something different?” company president Matt Kahn says. So he and his partners set out to create a Cinnamon Apple Amber Ale. Head brewer and vice-president Corey Catalano looked to oatmeal for thickness, brown sugar for color, allspice for aroma, and Mayer Brothers apple cider for flavor. The result has both great taste and body, with everything in balance. Big Ditch’s beer debuted in mid-October. Its downtown tap room, perfect for business functions, should open within a couple months. Big Ditch Brewing, 55 E. Huron St.

Wardenator Double Bock
Down in the Old First Ward, Gene McCarthy’s has been a neighborhood haven since 1968. Its new owners have kept the wood paneling, green-checked curtains, Notre Dame banners, and vintage sports photos that make it homey. But they’ve also built a small brewery next door, producing beer since February. Of their fall seasonals, the Wardenator Double Bock is a standout, with rich caramel notes and just a slight bitterness. “I wanted something dark, malty, kind of a statement,” brewer Matt Conron says. Gene McCarthy’s Brewery & Kitchen, 73 Hamburg St.

Oktoberfest
Pan-American Grill & Brewery’s take on a traditional Oktoberfest style brew is hoppy and hard-edged. It has a full mouthfeel, a definite crispness, and a German authenticity—all the Vienna malts were imported from the fatherland. Pan-American is a brother brewery to Pearl Street, but its beer is made on-site at the grand Hotel Lafayette. “There’s a misconception that all our beer is brewed at Pearl Street and brought over,” bar manager Kristy McDonald says. “But it’s a fully functioning brewery right below us.” Pan-American Grill & Brewery, 391 Washington St.

Blizzard Bock
Back for its sixth year is Flying Bison’s classic Blizzard Bock. It, too, is ready to take beer drinkers beyond fall and on to January, with a satisfying body and a rich, malty taste. “When you drink a couple bottles of this on a cold winter’s evening, you’re having something,” owner Tim Herzog says. If you venture out even on a chilly day, try it in Flying Bison’s spare new brewery, where huge windows behind the bar frame the brewing action. Flying Bison Brewing Co., 840 Seneca St.