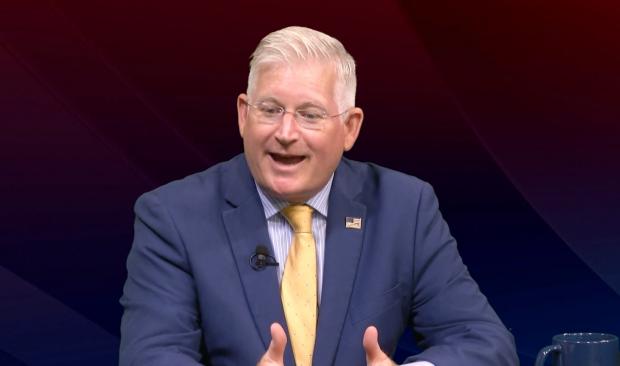 The “Green Light” statute, enacted earlier this year, will permit undocumented immigrants to obtain a New York State driver’s license. It goes into effect in mid-December. It is not — and should not — be a DMV apparatchik’s job to determine who is or is not eligible to be present in the United States. Undocumented immigrants would be able to obtain standard licenses that are not compliant with Real ID, and would be marked “Not for Federal Purposes.”

Republican Erie County Clerk Michael “Mickey” Kearns declared that he would not issue licenses under the duly enacted state statute. Earlier this year, he brought a lawsuit in his individual and official capacities challenging the constitutionality of the state’s “Green Light” law. On Friday, United States District Court Judge Elizabeth A. Wolford dismissed Kearns’ lawsuit in its entirety, ruling that he does not have standing to bring the lawsuit, and that the Court therefore does not have subject matter jurisdiction over the matter.

That afternoon, Kearns held a press conference. There, he did his best Donald Trump impression. His behavior was unbecoming of an elected official. His declarations and  his clumsy, ignorant analysis of Judge Wolford’s decision would have made a 1L blush. Kearns’ reaction was absolutely astonishing.

Look at this anti-immigrant clown. https://t.co/GkPcQnY5KF

Here is the first page of Kearns’ prepared remarks:

Before I get to the substance of what is written on that page, it bears mentioning that the law bifurcates two overall types of government officials: your job is either ministerial or discretionary; that is to say you either implement policy, or you get to have a say in its creation. When Mickey Kearns was an Assemblyman, his role was discretionary, and he had a say in the legislative process. A county clerk does not set policy; he does not have a discretionary governmental role. He has a set of duties he is charged by law to fulfill, and he is to do so as accurately and efficiently as he cares to do. A county clerk is not a diner at some sort of legislative cafeteria, where he can pick and choose the laws, (subject to his jurisdiction) that he feels like carrying out.

Kearns has staked out a position as the Kim Davis of driver’s licenses. Just as that Kentucky clerk had a legal responsibility and duty to issue marriage licenses to same-sex couples, Kearns has a duty to follow New York’s Green Light. This is not dissimilar from when Sheriff Tim Howard declared that he would not follow the New York SAFE Act, but individual police offers do generally retain some degree of discretion. Kearns does not. Imagine if Kearns claimed some sort of opposition to, say, charging recording fees for deeds. He has no more right to ignore the Green Light law than he has to ignore any other law that has applicability in his office.

In his prepared remarks, Kearns said

Well, if Kearns had bothered to read the entire 32 pages, Judge Wolford made it perfectly clear when “the hell” they are open, and why they are not now.

Kearns is wrong - the Judge did not tell him he has to issue driver’s licenses to anyone, but a New York State statute does. When he complains that “County Clerks” have to either be “prosecuted or removed from office,” Kearns omits a key option: the clerks could also choose to follow the law. I guarantee you that Judge Wolford is in a better position to determine whether and when Kearns can bring this lawsuit than he. Likewise, she is better positioned to opine as to the constitutionality of the state statute than he.

Judge Wolford decided that Kearns has no standing because there’s no injury to him in his individual or official capacity. As a result, the court lacks subject matter jurisdiction. Kearns’ claims that he could go to jail, having run afoul of immigration law, or removed from office by Governor Cuomo for not following the state statute, were ridiculous, speculative, or both. Judge Wolford noted that there have been no federal prosecutions of DMV commissioners in states where undocumented immigrants already have access to licenses. The Judge also held that a person such as Kearns would have to be under a threat of prosecution under and pursuant to the state law being challenged. By contrast, Kearns was claiming he could be prosecuted under a different, federal law.

Judge Wolford also held that Kearns’ alleged potential removal from office would also be pursuant to a different statute, and wholly speculative. The Court noted that removal of a County Clerk is always within the Governor’s powers:

Article 13, §13(a) of the New York State Constitution grants the Governor of New York the ability to remove from office “any elective sheriff, county clerk, district attorney or register,” so long as the official in question is provided “a copy of the charges against him or her and an opportunity of being heard in his or her defense.”

What constitutes the basis for removal is wholly within the Governor’s discretion. The Court then set forth the ridiculousness of Kearns’ argument:

According to Plaintiff’s logic, if the mere theoretical possibility of removal under Article 13, §13(a) was sufficient to confer standing, any elected official covered by Article 13, §13(a) would be able to automatically create Article III standing simply by declaring his or her intention not to comply with a law with which he or she personally disagreed. Such a conclusion is wholly inconsistent with the fundamental standing requirement of, at a minimum, an imminent injury-in-fact.

No such injury was shown to exist.

During the question-and-answer portion of Kearns’ Friday press conference, he claimed that implentation of the Green Light Law would cost taxpayers $700,000. There exists no basis for that, and it defies common sense and logic. If, suddenly, a new classification of resident is permitted to pay for a license, revenues will go up. Even the right-wing Comptroller’s June report, which clumsily attempted to denigrate the Green Light Law, did not assert a particular dollar figure with respect to any supposed cost of implementation. There is not so much as a dollar sign contained therein. It is a political document, not a financial one.

It remains risible to see Kearns, whose Irish roots are obvious, and Mychajliw, who touts his immigrant background every time he breathes, take such a Bannonite anti-immigrant position.

That’s not how this works. The Judge didn’t have to consider the merits of a lawsuit you did not have the right to bring. Indeed, she did rule on the merits, in a way — she decided that you lack standing, and them’s the merits. This wasn’t some sort of hypertechnical procedural ruling on an improperly filed form, a blown deadline, or a word out of place — this was as “on the merits” as this Judge could get on this case.

She did not have to rule on the constitutionality of the Green Light statute because there existed no one before the Court with the capacity to challenge it.

If, as he claimed, Kearns wanted a “showdown” on the constitutionality of the Green Light Law, then he should have found a way to be aggrieved by it.

Mickey Kearns is an embarrassment. He seems wholly unqualified and unwilling to act as Erie County Clerk. We could have elected Steve Cichon or Angela Marinucci, and instead we have this barely sentient individual running around trying to stick it to immigrants. That he is still at least nominally a Democrat is an outrage. While it may be technically not possible formally to expel someone from the Erie County Democratic Committee, it should be done — even if just for show. Let the Republicans have this person, as he clearly more closely hews to their anti-immigrant positions.

The Clerk serves for four years. Kearns was elected in 2018. Let’s make his first full term his last in this office and send him to the dreaded private sector he has so vigorously avoided.