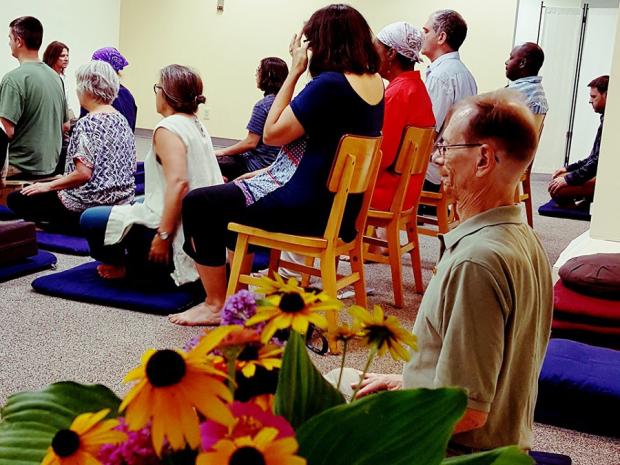 Outside of the Shambhala meditation building, Jose Rodriguez sat waiting for me as I ran up, five minutes late for our meeting. His ankles were crossed and it was still warm enough outside that he didn’t need a jacket over his white linen shirt. He told me he didn’t even mind that I was late.

Rodriguez is head coordinator for the Shambhala Meditation Group, which meets in their new location on Delaware Avenue. The group moved to the spot in August, and it’s the biggest space they have had to date. Rodriguez agreed to show me around and even invited me to sit through the Thursday night meditation group, which, as always, is free to the public.

He led me inside and then down the hall to where the evening’s group was meeting. We passed a kitchenette and took our shoes off in the hallway closet before entering the meditation room.

As Rodriguez showed me the space, he told me a little bit about the people who show up to use it.

“We have people coming through town who are familiar with the tradition and show up while they’re here,” he said. “There are the stressed-out college students and the people who come week after week. But really there are all sorts of people who show up in this day and age.”

Rodriguez explained that lots of people are looking for different ways to live and relate to others and their own selves. People are also aware of the tremendous amounts of suffering in the world and are searching for ways to pacify strife within themselves and on a outward level. There seems to be a connection. Meditation seems to help.

Twenty electric blue square cushions were set up on the floor in the main room. There was a shrine of sorts in the front with pictures of various Shambhala leaders. A white flag with three colored stripes and a yellow circle in the center was hanging on the wall. A red wooden shrine with gold trim was the only thing in another room off to the side, which is in the process of being converted into a free library. The shrine was made by Steven, a regular group member.

Rodriguez was to brief me before I joined the group, as he or another teacher does with each new member.

We walked into a smaller room that had two cushions positioned across from each other and a small pot of fresh flowers. He instructed me to sit down.

“Your knees should be close to the floor and your back should be straight,” Rodriquez observed. He explained how relaxing the shoulders and engaging the core to keep oneself upright was conducive to feeling powerful. “It’s a position that suggests you are paying attention, that you are alert. You are aware of how your body is resting, which is in an open way. It’s very regal.”

We talked for a few minutes more about how to sit properly and where one’s attention should be during the meditation. He explained that the Shambhala tradition does not emphasize how to breathe or require keeping one’s eyes shut during meditation. The idea is to be able to imitate this practice for a few moments throughout the day.

“The focus of Shambhala meditation is not centered around enlightenment,” Rodriguez said. “We focus on accessing our nature of goodness, which all people have. By realizing this part of yourself, you are able to better help the world at large.”

This simple focus is what attracted Jenny, who has been with the group since its earliest years, to the practice.

“I’ll be at work and lots of things are happening. I’ve learned how to become aware to pause, to practice listening. It’s important to be present with people you’re working with because it’s necessary for being kind to one another.”

Buffalo Shambhala was started 16 years ago by Trudy, who still practices with the group, and her daughter, who had just come home from college at the time. Trudy recognizes the implications of this sense of profound interdependence. “With the Shambhala practice, you can find a built in set of people who have the same values as you,” she said. “We want to cultivate basic sanity, basic goodness, and peace. This happens when you meditate on joy and on contentment, and when you begin to work on yourself.”

Rodriguez and I joined the group as they were starting the 10 minutes of silent walking meditation. After the group meditation was over, we arranged the cushions to form a circle. Pat, the leader for that evening, encouraged us to discuss several Buddhist passages that she had read aloud. Group announcements were made, and Trudy and Jenny gave more details about upcoming events, like the ongoing Mindful Monday Mornings, and several retreats the group was going to hold. They reminded us that all events are open to the public.

Pat asked the two other newcomers, Melissa and Molly, and myself how we felt about the session. Melissa said she was thankful for the time she had to spend with herself. She was a busy, post-college professional and rarely had time to simply connect with herself.

The small community stuck around for another 15 minutes or so, enjoying tea someone had made in the kitchenette, and a plate of cookies.

Then, one by one, everyone left to rejoin the whirlwind of their life. Until next Thursday.