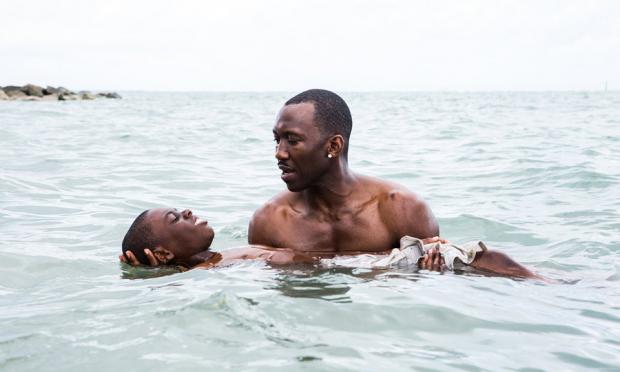 It’s just about impossible not to overpraise Moonlight, as you may have noticed if you’ve seen any of the advance reviews of it. The review aggregator site metacritic.com gives it 99 percent, which means that just about every one of the 44 critics surveyed has raved about it.

Before I get any further, let me clarify that I don’t disagree. If all you’re looking for from this review is an indication of whether or not it would be worth your while to see it, I will answer in the affirmative and let you go. It’s one of those films that I wish every viewer could encounter with no expectations or knowledge of what they’re going to see. And any moment of what’s in it that I might describe to you is one that I would diminish. I’m thinking particularly of a few lines of dialogue, spoken between two boys who are friends or by one of those boys to a trusted adult, that are so much more powerful for the quiet way they are delivered.

But, if you won’t just take my word for it: Moonlight looks at Chiron, a young boy growing up in a rough section of Miami, beginning in the late 1980s. It takes place in three sections, each named after the name by which he is known at that part of his life. In the first he is on the verge of adolescence, beginning to see what are going to be some of the hardships of life. The only son of a single mother, he puts his trust in a neighborhood man, Juan (the great Mahershala Ali, whose character I would have liked to see more of). In the middle segment he is a teenager, aware of himself and contemplating a life that seems to hold no place for him. In the last, he is an adult of his own creation (Trevante Rhodes), a surprise to us, but still not complete, though he may yet get there.

That’s still awfully vague, isn’t it? I don’t want to say that Chiron is black, because you may jump to the conclusion that this is a “life in the hood” movie. Which it is, but one that doesn’t deserve to be confined by that cliché. Here’s one detail I’ll describe: the movie gets the light of Miami, bright but not clear, a little oppressive, just right. Director Barry Jenkins and writer Tarell McCraney grew up in Miami themselves, and to the extent that this or that moment is unfamiliar it nonetheless seems trustworthy.

I also don’t want to say that Chiron is gay, a realization he comes to over the course of the film. Again, that’s likely to make you think this film is headed to any number of places where it isn’t. Even worse, I’m afraid it might make you think that his story is something you couldn’t relate to.

Just go see it. You’ll be glad you did. As I said to the publicist after the screening when he asked me for my reaction, It’s a movie that will stay with me for a long time.

Philip Roth won a Pulitzer Prize for his 1997 novel American Pastoral, which many consider his magnum opus. I haven’t read it, but I’ll have to assume that most of anything that was good in it got lost in the transfer to the big screen. Ewan McGregor (who also directed, filling in at the last minute after Philip Noyce pulled out) stars as Seymour Levov, nicknamed Swede for his blond good looks and high school athletic prowess, both rare for someone in his Jewish neighborhood. His life initially seems charmed: after military service at the end of World War II, he marries the local beauty queen (Jennifer Connelly) and goes to work at the glover factory his father owns in Newark, eventually taking over for him. On their ranch in the suburbs, they raise a daughter. But when the 1960s come along, everything Swede took for granted starts to crumble, just as the country seems to be doing.

McGregor’s direction is adequate for what the script calls for, which seems to elide an awfully lot of the book. (It has widely been considered unfilmable.) Swede’s deterioration centers on his daughter, played by Dakota Fanning, and the screenplay by John Romano indulges in a lot of dime-store Freudianism, much of it rather ugly. The film gets to where it’s going by the midpoint and then just sits there, grinding your face in its (or Swede’s? or Roth’s?) hatred of the 1960s.