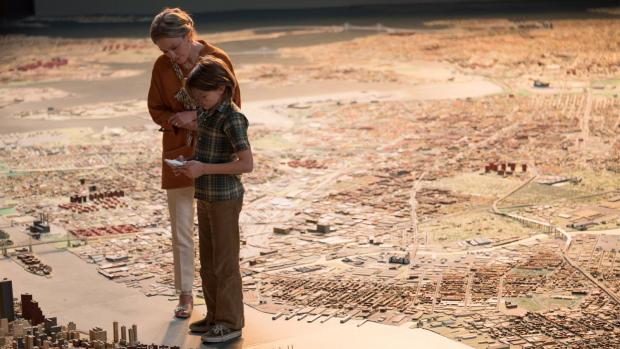 To be brief: Todd Haynes’s Wonderstruck is one of those movies that comes around maybe once a year, if we’re lucky, which so exceeds my poor powers of description that I’m compelled to ask you to just go and see it without reading anything I have to say about it: I would hate to ruin any of it for you, and I would certainly rather that you discover all of it for yourself.

Or at least so I wrote in my notebook about halfway through watching it. By the time it was over I was a little disappointed—where the film gets to isn’t nearly as memorable as the trip it takes to get you there. But when it’s at its best, which is most of the first hour, it’s so good that you almost expect it to fall off some. An hour is a long time for a film not simply to maintain your interest but to hold you rapt.

Adapted from a book by Brian Selznick (Hugo), Wonderstruck interlocks the stories of two children, both 12 years old, both of whom come to Manhattan on journeys of self-discovery. Ben (Oakes Fegley, from Pete’s Dragon), is from the Midwest. After the death of his mother, he finds in her belongings a clue that might bring him the identity of his father, which she always hid from him. Rose (newcomer Millicent Simmonds) lives in Hoboken. She is obsessed with a popular movie star named Lillian Mayhew (Julianne Moore).

Will Ben and Rose cross paths? Probably not, because their stories are 50 years apart. She travels across the river to Manhattan in 1927, while his journey across the country begins in 1977.

Those are 50 years in which the city went from its peak to its nadir, and one of the many things that is pleasurable about Wonderstruck is the contracting depictions of the two eras. Rose’s world is monochromatic and lacking the spoken word, filled with people elegantly dressed walking bustling streets. Haynes approaches these scenes as if there were themselves a silent movie of the kind that Rose adores, though he doesn’t imitate them so slavishly as to alienate a modern audience. By contrast, the street scenes in 1977 look as if they were photographed with a Polaroid Instamatic camera, record the failing infrastructure, ugly clothing, urban decay. (It puts anything in HBO’s The Deuce to shame.)

(The sight of a 12-year-old boy, alone, getting off a bus at the Port Authority is likely to make many people cringe with worry, but while Haynes doesn’t downplay the dangerousness of this milieu, neither does he exploit it: this isn’t that kind of movie.)

Much of Wonderstruck takes place in museums; movie theaters, bookstores, and libraries also figure prominently. There was a time, not so long ago, when these served as halfway points from which young people could begin their exploration of the outside world, places that required them physically to leave their houses. Children in our era may be able to learn so much more on a factual level from the comfort of their homes, but it’s not the same kind of knowledge.

Everyone in Haynes crew is working at the top of their game: composer Carter Burwell, photographer Edward Lachman, and especially film editor Affonso Goncalves, who weaves the disparate times together in a way that is a textbook example of his craft (bearing in mind the old dictum that editing you notice is bad editing). And his Millicent Simmonds, who plays Rose, has a face you just can’t take your eyes off of. Appropriate to the era Haynes is recreating, she embodies Norma Desmond’s memory of silent film stars: “We didn’t need dialogue. We had faces.”

If only the story as it is finally revealed lived up to the skill with which it is told. Haynes finds a storytelling new trick in his final sequence, one involving the massive diorama of New York City that was built for the World Fair in 1964. But as charming as it is, you can’t help but be annoyed that he asks us to indulge him in this as he teases out the end of the story to tortuous lengths. Whatever its faults, they’re not enough to dislodge Wonderstruck from being one of the top films of the year.

The Man from Earth: Holocene is a sequel to a film you may not have heard of unless you’re an avid fan of indie science-fiction. Made 10 years ago, The Man from Earth was set almost entirely in a single room where a college professor (David Lee Smith) at his farewell party explains to his colleagues his secret: He is 14,000 years old. And, boy, has he learned a few things in that time.

In the new film, he is now teaching in Northern California, trying to keep his existence secret. That his field is comparative religions will give you some idea of the thrust of the story by Jerome Bixby, who wrote for speculative television shows like The Twilight Zone and Star Trek. It’s a slow-moving affair, at least until an extended confrontation between him and a young Christian student that is the meat of the script. It’s also apparently meant to be the first in a series of films, so you could do worse than to get in on them at the beginning. At the Screening Room this weekend.