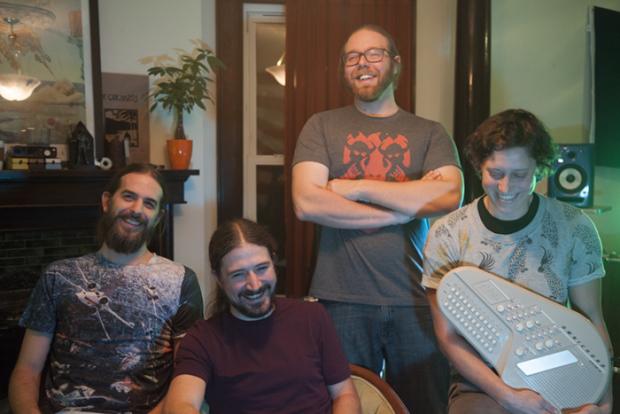 Attention spans are shorter than ever. It’s hard to imagine how it must feel from up on a stage, especially since it’s plenty disconcerting just looking around in an audience… people busy on their phones, sifting through social media posts or blathering on to someone about anything other than the performance. The one musical tactic that seems fail-safe in commanding people’s attention is serving up a groove — a tangible rhythmic structure via bass, drums and percussion that listeners can depend on to keep them engaged and moving (even if they’re still talking and swiping away on their screens).

This puts a band like Buffalo’s A Relative Term in a bit of a pickle. The trio (Mark Longolucco, Josh Elford and Jake Bernhardt, along with honorary sometimes-fourth-member, Rachel Heckl) dwells in a less toe-tapping, booty-shaking musical domain that asks listeners to pay attention without using any of the usual decoys. It’s a far cry from being a bar band, which is perhaps why the Saturday, November 11 release party for their latest, The Bleak, is happening at Hostel Buffalo-Niagara, down by Town Ballroom.

“It lacks percussion, so keeping it interesting in atypical ways for an active audience presents a fun challenge,” Jake Bernhardt said during a recent pre-band-practice conversation.

“We’re saddled with finding different ways of maintaining an audience’s attention since folks are really drawn in by rhythm and we don’t really have that,” keyboardist  Josh Elford agreed. “Rather, it’s not that we don’t have rhythm, but we don’t use any traditional rhythm instruments. It’s not a rhythmically driven musical project and we’re not just killing you with sound in terms of loudness either. It’s more thoughtful and deliberate than that, or at least it tries to be.”

If that sounds a little nerdy, maybe that’s because it is. But nerdy or not, A Relative Term has hung tight while many a local band has come and go. As a vehicle for the songwriting of Mark Longolucco, it’s existed in various forms for over a decade. Longolucco builds and records the tracks largely on his own, then brings them fully formed (and usually, already recorded) to the band. The Bleak is his third full length album (an EP was also released somewhere along the way), and he says he feels that it’s a more honest portrayal of his musical personality than what’s come before.

“It’s a step in an ongoing progression,” he said. “Hopefully you’re always learning form the last thing you did, and so I look at the other albums as sorta fitting into categories, and this one feels like the most accurate means of saying ‘this is the kind of music I make.’ First albums tend to be hopeful and innocent; on my second one, I was trying to create something a little bigger — see how far I could push what I was doing. This one goes back to somewhere that’s more honest and comfortable. Which also means, in some ways, smaller, and perhaps not as consistently positive in outlook.”

On the surface, The Bleak plays out like fairly standard singer-songwriter fare, punctuated by some dreamy alt-folk properties, but there are plenty of engaging sonic oddities in the details. Longolucco, meanwhile, sometimes conjures the reedy vocal quality of a young Peter Gabriel. True to its name, the otherwise contemplative piano piece, “An Endlessly Running Machine” is accented with a recurring electronic ticking that initially builds tension but quickly becomes hypnotic. The bent-note chiming in the closer, “Wrap Your Body Around Mine” takes the song’s insular, romantic quality and spikes it with a startling wooziness that keeps the listener on their toes. The more driving “March Forth” brims with nervous energy and is probably the closest cousin to a pop song in the set; it also marks the rare appearance of drums and bass, which, as previously mentioned, don’t factor into the live version of the band. Call it a brief departure.

“I will record an entire song and then it becomes something for the band to disassemble and reassemble,” Longolucco explained. “Sometimes we end up pretty far afield from where I started, which is impossible to avoid and also can be pretty cool. I may be the only player when I put a song together, but there’ll be many layers; I’m approaching it from a recording standpoint, not so much from a live performance point of view. So there’s usually some tearing down and figuring out where it can go from there.”

Being forced to sometimes distill arrangements in order to play them live makes the details that remain that much more important. Over the years, the members of A Relative Term have grown to trust one another’s musical instincts and, perhaps most importantly, actively listen to each other when playing — it’s the secret ingredient that enables them to best represent Lonolucco’s original intentions.

“I’ve played with many solid musicians, but only a small percentage can actually communicate well or have the same ideology or drive that makes a project cohesive” Elford said. “This is one of those rare situations. I can find people that play instruments very well, but it’s a challenge to find people who will listen while they’re playing, which is the only way you’re going to be able to step away from your part, look at the bigger picture and hear the whole band.”

“I feel like anyone that’s really a musician has that ability,” countered Longolucco. “But maybe they don’t always know that it’s there or how to nurture it when they’re playing. The trick is to realize that it’s happening and then harness it. And you have to be able to trust your playing enough to not focus on it. It helps us figure out where things need work. If the music isn’t making you feel something or creating a viable atmosphere, then we’re not doing something correct and it needs to be adjusted. If we weren’t listening to each other, we’d never catch that stuff.”

A Relative Term isn’t a particularly improv-heavy band, but the members seem to agree that they push each other out of their respective comfort zones, resulting — ironically — in a greater degree of comfort felt by all. Elford, for example, is usually considered a prog-rock drummer. But here, he’s playing keyboards for an ‘ambient, spacey landscape band.’ By being willing to take chances, sometimes succeeding and sometimes not, a new kind of trust develops.

“While it may not truly be a ‘judgment free zone,’ it’s a very encouraging musical environment and there’s nobody I feel more comfortable being on stage with,” Bernhardt said. “It doesn’t sound quite like anything else happening in Buffalo, and it never has, which is one of the reasons I’m always happy to be involved with it – it’s different, I’m able to explore more in it and am accepted in doing so… which isn’t so easy to find.”