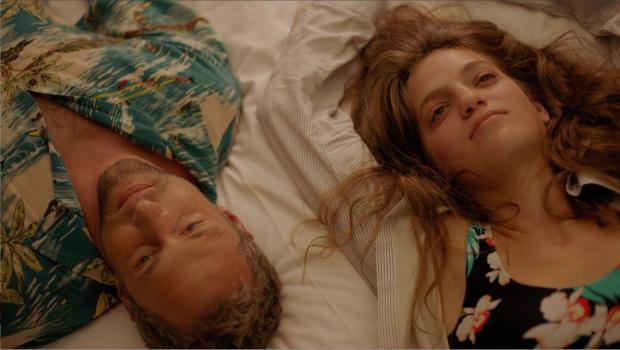 A title that sounds like a new book by Robert Reich attached to a film that consists entirely of two people in a hotel room makes for an intriguing combination. That writer-director Adam Mervis leaves it to viewers to make the connection(s) is fair warning that The Last Days of Capitalism is more intellectually challenging that, say, 21 Bridges, the 2019 action hit that Mervis also wrote. But even those uninclined to work out all of the script’s hidden meanings will find reasons to enjoy this trim indie drama.

The Last Days of Capitalism opens on the morning after a hot-and-heavy night. “The man” (Mike Faiola) is already awake, with breakfast ready for the woman (Sarah Rose Harper) in his bed. We’re in a sleek suite with the Las Vegas strip visible outside the windows, so some viewers will be less surprised at the first of the film’s revelations: she is a prostitute, who is ready to be on her way. He wants her to stay for the day, and seems ready and able to offer whatever that takes in terms of cash. A discussion of what her time is worth, and the difference between “price” and “value,” shows that both characters enjoy the art of abstract discussion: are we watching love in bloom?

But don’t get too attached to the idea that this is Pretty Woman meets a two-hander like Before Sunrise or What Happened Was. The names are only the first secrets that our two protagonists are keeping from each other, and our expectations will be upended several times before the movie gets to its unexpected conclusion.

That the ending made this viewer want to rewatch the movie to see how it plays in light of full knowledge of where it is going could be a strength or a drawback: does it all tie together, or is the finale arbitrarily shocking? You can make up your own mind. Suffice to say that stars Faiola and Harper handle endless amounts of dialogue with ease and charisma, an accomplishment all the more impressive given the gulf between what they are saying and what they might be thinking. Special praise is due to cinematographer Bethany Michalski and editor David Au for retaining visual interest in a limited setting.