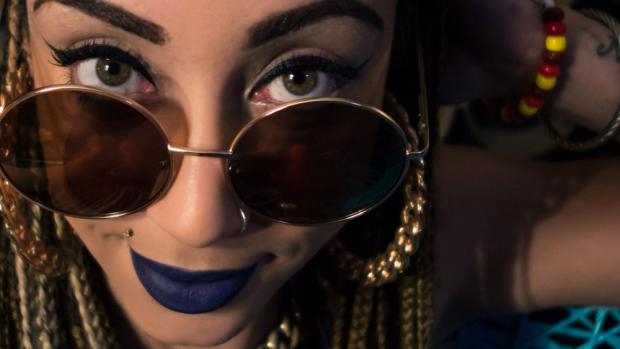 There must be something in the environment in Western New York that produces bass players: Billy Sheehan, Robby Takac, Kristen Pfaff, and Rick James are well known examples. Kent Weber and Jim Wynne have made their mark with the instrument, too. We can now add another name to the list: Zuri Appleby. On any given night or day you can catch Appleby laying down a groove as bassist with numerous bands. She has recently added pop sensation and heartthrob Nick Jonas to her lineup of gigs—though Nick probably thinks he added her to his lineup. We could not have a better emissary representing our city.

The Public caught up with her while on a brief hiatus from her whirlwind tour, before appearing on Ellen and playing the legendary Hollywood Bowl. She heads to London on November 7. We will have a chance to see her performing with Jonas at First Niagara Center next summer, July 17 with Demi Lovato in their upcoming Future Now tour.

Why the bass?
I actually started on guitar, violin, and French horn. I lost interest in the French horn pretty quickly because it was too heavy and awkward. Guitar was great for a while but when my dad [Rodney Appleby] had me try playing a song on bass after I was already playing guitar—it just felt so much more natural and I felt more connected to it. I had a strong desire to get good at it, more than I felt with other instruments I had played.

Tell us how growing up in a musical family has impacted your life.
Growing up, I was around and involved with such an eclectic assortment of people, activities, and creative outlets, which I know has contributed to so much of my open-mindedness and zeal for finding and seeing freshness and beauty in all ways. Growing up in a musical family has impacted my life so much but even more so, having a supportive family has impacted me more than anything. They never pushed music on me specifically. They let us try anything and everything that my sister and I wanted to try and music is what I chose and what I fell in love with. They never told me to do anything else but what I love, so that helped me blossom into who I am today.

Is there any style of music you lean toward?
I love all music which is soulful in any way. I really love modern styles which have heavy influences from classical musical traits but delivered with new sounds and sonic mediums. But go-to styles for me include Motown, old school funk, old school R&B, and reggae. I can listen to those styles pretty much anytime and be happy.

What was the entire time frame from getting contacted to getting on the plane?
Oh, four days.

How is Jonas to work with?
He’s very direct, very relaxed, very professional, and very levelheaded. He knows what he wants and knocks it out and gets it done. He’s a very relaxed person to work with.

Tell us about the tour.
The tour has been amazing! The first show we did was the Made in America Festival in Philly, which Jay Z curated. It was 80,000 people… look over and Jay Z is in the wings watching us play! Then De La Soul goes on after us. Seeing Beyonce perform on the first day on the same stage I was just on was probably the highlight. It was absolutely amazing to see such a hard worker. Plus, a female from Buffalo, Venzella Joy Williams, plays drums for her, so we got to collaborate after, which another highlight. After that it was a different city every day for a month.

Sounds like a grueling pace.
Actually they make it very comfortable—very reasonable. The only thing to complain about is just waiting around. Waiting on word on when you have to do what you have to do. You always need to be available but the amount of time you’re actually working is not that much. Each show is 90 minutes and we have a sound-check which is usually less than an hour. You have to be ready and be dressed and be around. So, it’s really not that hard. Just small things that you get used to but then the rest of the time is awesome.

Did they play an active role in what you wore and your make-up and hair?
Well, the girls, we do our own hair and make-up. We had a stylist that did a quick fitting, literally the day before we left from our rehearsals. And when we got our wardrobe it wasn’t even the same thing that we had tried on. They kind of put us in exactly what they wanted. It’s pretty sexy, all black—a dominatrix-y look.

Obviously, the hard work you’ve put into your musical career these past five to 10 years is beginning to pay off. Did you feel that if you worked hard enough you were going to achieve whatever dream you might have?
My friend Greg Webster from high school, he’s a drummer and we’re best friends. We’d always say, “There is no plan B, there’s only plan A.” I never, ever wanted to do anything but music. I told myself, when I started playing bass at 14, that whatever I’m gonna do to make money or make a living is going to be with my music and I just stuck with it no matter what, because it’s what I wanted to do.

I know you’re able to play almost any genre of music. How do you feel about branching out?
I would like to find my voice a bit more. I know my voice is eclectic and it has all different styles of music, buy I don’t know if I have one style or feel of music that I identify with most. So I’d like to find that. Some kind of fusion of course. I’d like to get there in the future.

I would like to do an album and work on my writing. Since I’ve done this tour I’ve had a drive to create and to write music and get it out that way. So I want to do an album. Kind of something like Robert Glasper, where he had a different artist on every track with his Black Radio album, and feature different musicians from Buffalo that already write and co-write with them to help to put us all up with whatever tier I’ve had with this experience.

We see you around Buffalo with a number of bands. It’s probably, what, six?
Or more! Throughout the past five years, at least 10 different groups. But I’ve played with countless bands, be it a one-off or be it weekly.

You recently had a break in the tour, and it was really fortunate timing that you could be here for the induction of your mother, Linda Appleby, into the Buffalo Music Hall of Fame.
It was amazing. We were supposed to do another whole month. I wasn’t even supposed to be here until November…but I had two weeks off which made it possible for me to come see my mother be inducted into the Buffalo Hall of Fame for being a music educator!