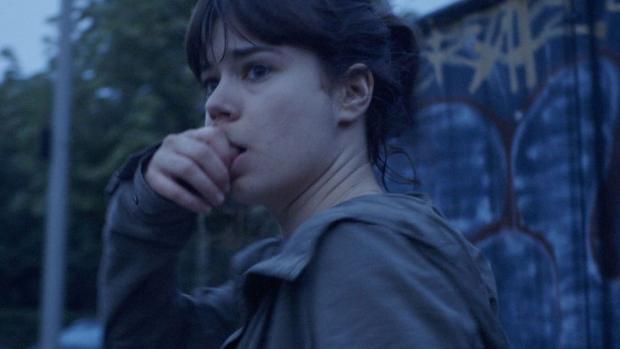 You all saw Birdman, right? Last year’s Oscar winner for Best Picture? The one thing you are guaranteed to remember about it, aside from Michael Keaton running around Times Square in his underwear, was that it was shot to look as if it had been photographed in a single unbroken camera take.

Victoria, a new drama from Germany, actually was shot in one take. And a long one too—not counting the opening and closing credits, it runs about two hours and 15 minutes.

The story begins in the wee small hours as a girl dances by herself in a Berlin techno club. Victoria (Laia Costa) is Spanish, new to Berlin and lonely. So she’s happy to chat with four mildly drunk guys when she leaves the club. They hang around for a bit, buy more beers, share a joint on a rooftop, get to know each other. She’s clearly attracted to Sonne (Frederick Lau), who looks a bit like a younger Liam Neeson. But as the night wears on, she agrees to go with them on what they describe as “something they gotta do.”

Big mistake, as anyone who has ever seen a film noir will realize.

Strictly speaking Victoria is not a first: The art house documentary Russian Ark and Mike Figgis’s drama Time Code were shot in single takes, as well as various experimental movies and the recent horror movie Unfriended. But Victoria is what you might call the first real movie to do it, one with a conventional story and action to offer along with the gimmick.

To say the least, this requires incredibly precise choreography to maintain the illusion of natural action, as well as a lot of pre-shooting rehearsal. The movie had a relatively small budget, so digital “correction” (aside from the audio) was not an option. The whole thing was recorded three times, with the third take being the one that was used.

In interviews, director Sebastian Schipper bristles at the use of the word “gimmick,” and you can’t blame him: At the very least, he accomplished what he set out to do spectacularly. The closing credits give first mention to cinematographer Sturla Brandth Grøvlen, and deservedly so. There are any number of scenes in the movie where I found myself wishing that Schipper had hired a second cameraman to shoot the whole thing from a distance, so that we could see how Grøvlen achieved some of his shots: It would be the perfect DVD extra.

But that’s the drawback to Victoria: You can’t help but be so aware of its method that you continually take yourself out of the story, wondering how it was done. And when you become that conscious of what you’re watching, you start nit-picking other things: For instance, the story is clearly compressed—examples would be spoilers, but the events require more than the 135 minutes that they unspool in.

So would Victoria have been better off filmed in a more conventional manner? Probably not. The actors are excellent, particularly the two leads, despite some draggy improvised scenes. But the story itself would seem too clichéd without the immediacy of the presentation. In the end it’s more stunt than drama, though at its best an exhilarating stunt.

A few hours after watching Victoria I was back in a theater for Spectre, the new James Bond movie, which opens with an extended tracking shot. Deju vu, I thought, and not for the last time that evening. Filled with references to other Bond films, this follow-up to the hugely successful Skyfall will best be appreciated by the hardcore Bond fans who know the details of every movie back to Dr. No. At the very least, it expects you to be familiar with all the entries starring Daniel Craig, whose last appearance as 007 this will be.

But who goes to James Bond movies for the plots? I’ve never been much of a fan, but it seems to me that the appeal of the series has always been about everything other than story: the expensive production values, the exotic settings, the silly gadgets, and the particular charisma of the current actor in the role.

In trying to write a plot that ties together all of the recent Bonds, I think that Spectre bites off more than it can chew. It doesn’t help that it has an internal contradiction as a farewell to Craig (whose four Bonds constitute a reboot of the franchise) and a cornerstone for future entries, with stronger roles for supporting characters like M (Ralph Fiennes), Q (Ben Whishaw) and Moneypenny (Naomie Harris). (I’m constrained from talking about Christoph Waltz as the villain of the story by the studio’s plea not to spoil any of the film’s surprises, though as a non-hardcore Bondie I’m not even sure what all of them were.)

On its own merits, Spectre is a distinct step back from Skyfall. Too much of it feels repetitive (once again the double-0 section is threatened with being phased out), tongue-in-cheek (there are moments as silly as any in the Roger Moore movies, which I can only hope was meant as a joke), or underdeveloped. But the effects are still fabulous, the scenery still breathtaking, the women still gorgeous. The more things change, the more they stay the same.